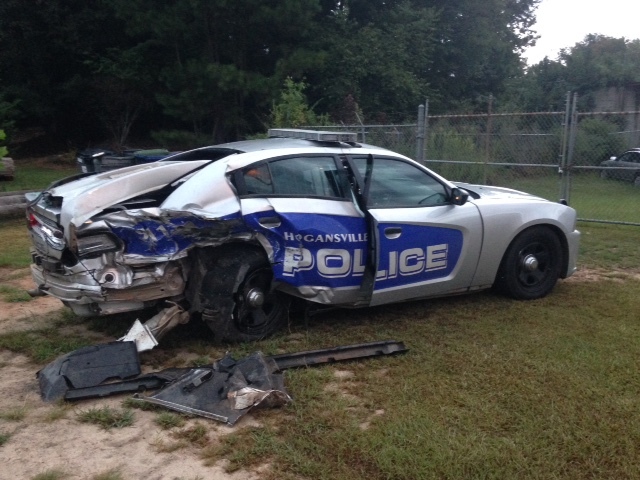 HOGANSVILLE — An alleged drunken driver caused the wreck on Interstate 85 early Saturday that hurt four people, including a Hogansville Police officer, according to Georgia State Patrol.

Ji Young Lee, 53, of Newnan, was charged with DUI, failure to maintain lane, failure to move over and no proof of insurance, states the wreck report released by GSP.

Lee was driving a 2013 white Cadillac SUV in the northbound lanes of Interstate 85 about 1:30 a.m. Saturday when he traveled into the emergency lane and hit the back of a parked Hogansville patrol car, troopers said.

The officer, Adam Grant, 40, had another car pulled over for a traffic stop. The force of the impact pushed the police vehicle on top of the car that was pulled over.

The SUV continued to spin out of control and stopped in the grass beside the emergency lane, according to troopers.

Grant and three occupants of the car that was pulled over were taken by ambulance to Piedmont hospital in Newnan, where they were treated and released.

Hogansville Police Chief Brian Harr said Tuesday evening Grant was sore and had a knot on his head, but otherwise OK. He noted the incident could have been much worse. Grant and the driver of the vehicle he had pulled over were standing between the two vehicles and had gotten back in their cars shortly before the wreck.

“It’s just incredible everyone was able to walk away,” Harr said of the wreck. “Cars are replaceable, equipment is replaceable, people are not.”

Lee told GSP he fell asleep behind the wheel of his SUV. The investigating trooper states in the crash report he believed the man was under the influence of drugs or alcohol.

Lee consented to having his blood drawn at a local hospital. Test results are still pending, according to the Georgia State Patrol.

Damage to a Hogansville police car is shown after it was hit from behind by an SUV early Saturday morning on Interstate 85. The officer was conducting a traffic stop when the SUV ran into it.

http://lagrangenews.com/wp-content/uploads/sites/37/2016/09/web1_web0908HPDwreck.jpgDamage to a Hogansville police car is shown after it was hit from behind by an SUV early Saturday morning on Interstate 85. The officer was conducting a traffic stop when the SUV ran into it.