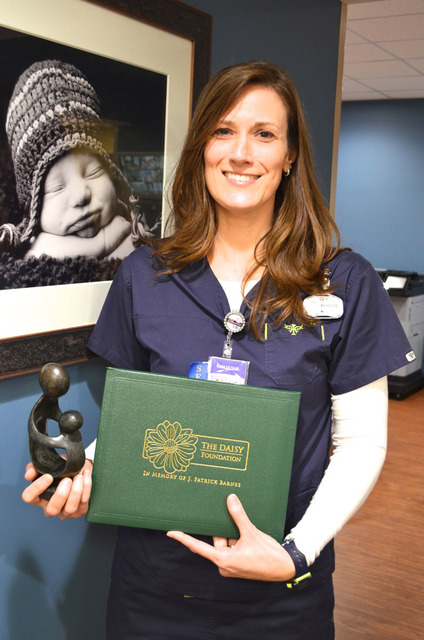 Thomas Lee, Angela Matthews and Patty Toney each received multiple nominations for the award from patients or their family members.

Over 2,000 healthcare facilities in all 50 states and in 15 other countries honor their nurses with The DAISY Award, which recognizes “the super-human work nurses do for patients and families every day.” DAISY stands for Diseases Attacking the Immune System.

Two sisters nominated Thomas Lee RN for the DAISY Award after the care he gave their dad when he was in the ICU for a heart attack and stroke.

They said during a difficult situation, Lee did everything he could to make their dad and family comfortable.

“He knew we had been up for over 30 hours, and he was so caring and compassionate to my dad and my family,” one sister said. “Thomas realized our whole family is the patient, not just the one in the bed. I’ve been a nurse for 38 years, and he exemplifies what nursing and West Georgia Medical Center mean to me.”

Another woman nominated Lee for the DAISY Award for the care he gave to her mother.

“My mother had a bad day, and he was very attentive to her changes and needs,” she said. “He reassured us about the ‘pureed food,’ He said he had tasted it himself and that it was actually good.

“He also was personally involved. He talked to my mom and not over her, involved her in her treatment and explained what he was doing.”

When Lee was leaving one day after his shift ended, the patient wanted to express her gratitude.

“My mom wanted to give him a kiss and patted him, even though she could not speak,” the daughter said. “It was her ultimate attempt to say, ‘Thank you.’ Thomas is an asset to the ICU, worked hard medically, was her advocate, called in necessary consults and got her on the right path. He is a very compassionate and caring young man.”

A mother nominated Matthews, a nurse in the Maternal Infant Services Unit, for the care she received during the births of her two sons.

“Sweet Angela is one of the most amazing and kind-hearted people I’ve ever met,” she said. “She sat with me and really cared about my total well-being during my stay. She has one heck of a sense of humor, and I always hated to see her leave when her shift was over.

“She left her footprints on my heart, and I will always remember her flawless care giving. I was thankful we crossed paths for both my boys.”

A new father nominated Matthews as well for the care his wife and their newborn received.

“She showed care for us being our nurse as well as on the following day as our nursery nurse,” he said. “I think she deserves this award because she made us feel at home and just completely comfortable.”

A patient nominated Toney, who cared for her on the Fifth Floor after her knee surgery.

“I became deathly sick afterwards, and I was humbled by my nurse Patty’s patience, kindness and compassion,” she said. “She was literally in my room three to four times an hour. She treated me with dignity and always had a smile on her face.

“At the end of her 13-hour shift, she stayed over to care for me and asked if she could give me a hug. What an example of a caring nurse who loves her job!”

Any patient or family member may nominate a nurse for the DAISY Award. Nomination forms are available at the front desk of the South Tower Lobby or at any nursing station at WGMC.

Nominations also can be emailed to Tammy Lynch at lyncht@wghealth.org and should include the nurse’s name, your name and contact information, and a statement of why the nurse is deserving of the DAISY Award.