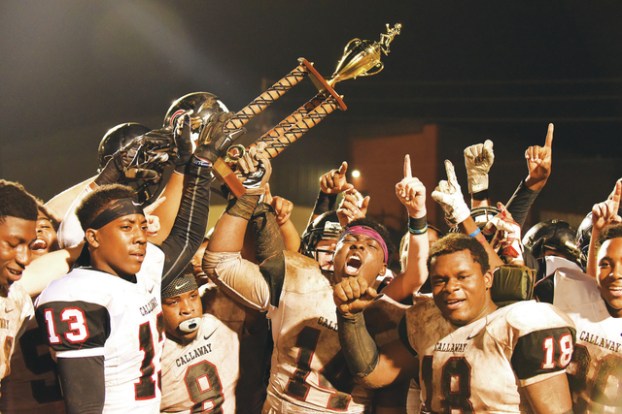 HOGANSVILLE – It was a happy and memorable homecoming for Callaway High’s Pete Wiggins.

Wiggins is a native of Alabama, and in a game on Aug. 26, he got to return to his home state as a head coach for the first time.

The Cavaliers found themselves down by two touchdowns early and they still trailed by seven points in the fourth quarter, but they ended up dominating the game’s closing stretch to secure a 42-28 victory.

Callaway, which opened the season with a 37-6 win over LaGrange, improved to 2-0 heading into today’s game against the Columbus Blue Devils at Memorial Stadium.

As for the homecoming, Wiggins said that was special experience.

“That was the first time I’ve been able to go back to Alabama and play,” said Wiggins, who has been Callaway’s head coach since 2005. “I grew up right down the road from Handley in Ranburne. That was a special game. And I was excited about how our kids played against a good football team.”

Handley came out smoking, and it was ahead 20-6 late in the first half when Callaway rallied.

Callaway cut the deficit to 20-14 by the half, and it outscored Handley 28-7 in the second half to win going away.

Callaway was trailing by seven points early in the fourth quarter after Handley returned a fumble for a touchdown.

The Cavaliers were just getting warmed up, though.

Callaway’s Dylan Johnson threw a 73-yard touchdown pass to Braylon Sanders, and Noah Stephens made the extra point to tie it.

Earlier in the game, Johnson not only had a touchdown run, but he also caught a scoring pass from Sanders.

Callaway’s defense did its part as well, shutting Handley’s offense out in the second half.

“It was a tough atmosphere,” Wiggins said. “Handley’s got a great team, and coach (Larry) Strain does a great job with his kids. I was really proud of our kids for handling that adversity. It was a physical, hard-fought game.”

Callaway didn’t have a game last week, and Wiggins felt the off week was timely.

“I think it came at a great time,” Wiggins said. “We played Northside-Columbus, and LaGrange, and Handley, and all of them were very physical football games. The off week came at a good time. We got some bumps and bruises healed up, and we’re going into a Thursday night game against a Class AAAAA team. The kids have worked hard, and they’re excited about the opportunity. We’ve just got to go and perform.”

Columbus, under the direction of head coach Phil Marino, began the season by trouncing Jordan 62-21 before getting blanked by Upson-Lee 20-0 last week.

Quarterback Caleb Bailey had a 70-yard run, but that was one of the few offensive highlights for Columbus.

Against Jordan, Bailey had 61 yards rushing on six carries with two touchdowns, and he threw for 115 yards with a pair of scoring passes.

A strength of the Columbus team is an offensive line that dominated Jordan.

“The catalyst of our offense is our line up front,” Marino said after the Jordan game. “We put it on their backs and how they go, we go.”

Columbus went 7-4 last season and reached the playoffs for the first time in two decades, and Wiggins believes it’ll be a big-time challenge tonight.

“Coach Marino does a great job with his kids,” Wiggins said. “They’re a big, physical footbal team. It’ll be a great challenge for us. We’ve just got to play our style of ball, and limit our mistakes, and defensively run to the ball and play fast and physical. The kids are excited about the opportunity to play that kind of team, in that kind of atmosphere. It should be a good game.”

Wiggins added that “we’ve had two good weeks of practice, and hopefully we can carry the momentum into this game.”

Callaway’s offense waits on a play to come in from the sidelines during a game against LaGrange. In two games this season, Callaway has scored 80 points. Kevin Eckleberry | Daily News

http://lagrangenews.com/wp-content/uploads/sites/37/2016/09/web1_CHS2.jpgCallaway’s offense waits on a play to come in from the sidelines during a game against LaGrange. In two games this season, Callaway has scored 80 points. Kevin Eckleberry | Daily News

Cornerback Dominic Copeland and the rest of the Callaway defense shut down Handley in the second half of a 42-28 victory. Kevin Eckleberry | Daily News

http://lagrangenews.com/wp-content/uploads/sites/37/2016/09/web1_CHS3.jpgCornerback Dominic Copeland and the rest of the Callaway defense shut down Handley in the second half of a 42-28 victory. Kevin Eckleberry | Daily News

LAGRANGE – It was a two-for-one Tuesday. The Troup High volleyball team not only got a victory over rival LaGrange,... read more