‘I could always see myself coming out of prison’ 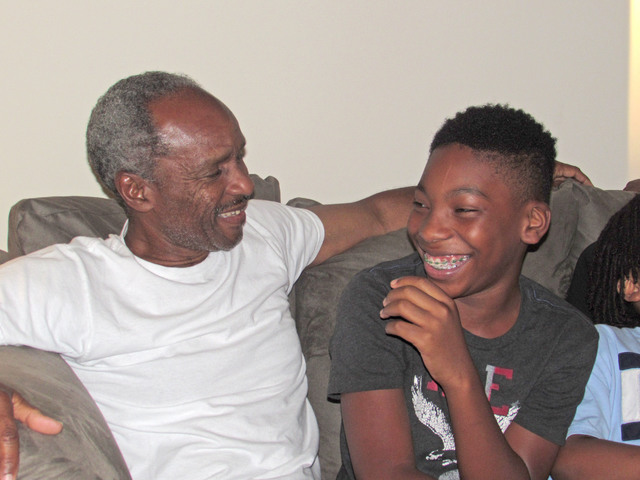 LaGRANGE — While most people remember the dates of holidays and birthdays, Donald Brooks, 63, will always recollect the days May 5 and Sept. 2, 2016.

On May 5, President Barack Obama granted Brooks clemency; effectively ending the life sentence handed to him for allegedly conspiring to distribute drugs and other nonviolent drug offenses. On Sept. 2, the West Point man walked out of an Atlanta federal prison for the last time as a free man.

“I just came out running and said, ‘Yes! No more,’” Brooks said smiling.

The father and daughter sat side by side on a couch, beaming from ear to ear. For the first time in over a decade, Donald and Aldes could laugh and talk to each other without a glass partition between them.

Donald Brooks spent 14 years and 71 days behind bars for a crime he said he did not commit.

Aldes explained her father was caught with drugs and arrested on felony charges twice before, once in 1989 and again in 1991.

Both times Donald Brooks pleaded guilty and was given five years’ probation, she said.

In 2002, though nothing was found in the Brooks’ West Point home, federal agents tied the man to a cocaine and crack cocaine drug distribution operation throughout Georgia and Alabama.

Investigators arrested Brooks that day. His bond was set at $1 million.

Federal prosecutors used the man’s prior drug convictions against him and asked for mandatory minimum sentencing. That meant if he was found guilty by a jury, he would receive a blanket sentence for all the charges against him and the judge would have no say in how much time he would serve behind bars.

He was given the option of pleading guilty and receiving some prison time or taking his chances at trial, Aldes Brooks told the LaGrange Daily News in May. Donald chose to place his fate in the hands of 12 jurors.

Eighteen other people tied to the case all made plea deals with federal prosecutors, in exchange for their testimony against Donald, Aldes said. They fingered her father as the “master manipulator” behind the crime, she explained.

He appeared in federal court in August 2002 and was found guilty.

Donald was sentenced two months later to life without the possibility of parole in a federal prison. He was 50 years old and the primary caregiver for 11 children.

“What hurt the most is when I had to leave them behind,” he said with emotion as tears welled up in his eyes.

The fight for freedom

While most of his family was in a state of shock, Aldes Brooks, just 19 years old at the time, became to determined to free her father from a life behind bars.

“I didn’t want to bury my daddy in prison,” she said matter-of-factly.

Donald’s lawyers appealed his case eight times. It was turned down each time. Even after the federal judge who presided over his trial, Jack T. Camp Jr., was arrested and charged for drug offenses in 2011, Aldes said.

Meanwhile, she began a battle of her own to free her father. She wrote hundreds of letters to state senators, governors, members of Congress and the Clemency Project 2014.

Aldes also wrote President Barack Obama every six months in hopes the most powerful man in the United States would commute her father’s sentence and let him come home.

Her letters and prayers were answered on May 5.

“My dad gave me strength,” she said. “He encouraged me. His determination and faith gave me the strength.”

“Everybody else shut down and was in a state of fear. But Aldes saw the light. She kept on trying to get him out,” said LaKendrick Brooks, Donald’s son. “I think it is amazing. She had the courage to write the president of the United States and ask for help … that, in itself, is very awesome.”

Meanwhile, Donald reached out to lawyers and relied on his faith during his 14 years behind bars. He said he read his Bible daily, attended a prison chapel and encouraged other inmates to remain positive.

“I couldn’t have made it without the word of God,” Donald said. “In the Bible, God says, ‘Let my light be seen.’ That’s what I carried with me the while time. I prayed that others would see God in me. … I never got a reprimand … they call it a ‘shot’ … the whole time I was in there. … People put you in jail, but it is up to you on how you come out of there.

“Inmates said to me, ‘Brooks, you have a life sentence,’” he continued. “I said, ‘No I don’t. God has my life.’ I stood on that promise the whole 14 years and 71 days I was in prison … I could always see myself coming out of the prison yard and walking out the door … When I saw the paper work (letter granting clemency) … it was overwhelming. I cried and cried, praised the Lord and thanked him for what he had done.”

The weekend Donald Brooks was released, he was reunited with many of his 11 children, 28 grandchildren, five great grandchildren and several relatives. They all gathered at Aldes Brooks’ home and then enjoyed Donald’s first true taste of freedom by visiting Stone Mountain Park.

Donald will stay with Aldes and her three children for now.

“I love it,” he said. “We have a full house. The family is all coming back together again.”

“It’s unreal to wake up and know that he’s really here,” Aldes said. “There’s nothing to worry about anymore. He’s here, helping me with the boys, leading our prayer sessions every morning … it’s a dream come true.”

In order to spend more time with his dad, LaKendrick left his home in California and moved back to Georgia.

Donald said he does not want to dwell on the past and instead chooses to forgive those who put him behind bars.

For other family members, forgiveness may take some time.

Donald is not sure what his future holds, but he hopes to share his testimony with others in the community.

“I’m going to use this to draw people closer to God,” he said. “I want to encourage kids who have gone astray or who don’t have parents who support them. … I’m going to relax and consult God on what I should do next. I’ll just let the Lord lead me.”

Donald has already been a positive influence on his 12-year-old grandson, Zikei. The two spend time cooking together and reading the Bible.

“I just want to thank him,” Zikei said emotionally as he looked at his grandfather. “Thank you. You are where I get my inspiration, my determination and strength.”

“I feel like everything is complete,” Aldes said, smiling as she looked at her family sitting around the living room. “Now we can move forward with future decisions. … I love it.”

Donald Brooks, 63, proudly holds the official letter from President Barack Obama that granted him clemency from a life sentence without the possibility of parole in a federal prison on nonviolent drug charges.

http://lagrangenews.com/wp-content/uploads/sites/37/2016/09/web1_web0909Brooks04.jpgDonald Brooks, 63, proudly holds the official letter from President Barack Obama that granted him clemency from a life sentence without the possibility of parole in a federal prison on nonviolent drug charges.

Donald Brooks prepares to hike up Stone Mountain with his family. The 63-year-old man was granted clemency by President Barack Obama after being given a life sentence in a federal prison for nonviolent drug offenses in 2002. He was released on Sept. 2.

http://lagrangenews.com/wp-content/uploads/sites/37/2016/09/web1_web0909Brooks05.jpgDonald Brooks prepares to hike up Stone Mountain with his family. The 63-year-old man was granted clemency by President Barack Obama after being given a life sentence in a federal prison for nonviolent drug offenses in 2002. He was released on Sept. 2.

Donald Brooks, 63, jokes with his 12-year-old grandson, Zikei. The two like to cook and study the Bible together. President Barack Obama granted the elder Brooks clemency in May from a life sentence on nonviolent drug charges. He served 14 years and 71 days behind bars before being set free on Sept. 2.

http://lagrangenews.com/wp-content/uploads/sites/37/2016/09/web1_web0909Brooks01.jpgDonald Brooks, 63, jokes with his 12-year-old grandson, Zikei. The two like to cook and study the Bible together. President Barack Obama granted the elder Brooks clemency in May from a life sentence on nonviolent drug charges. He served 14 years and 71 days behind bars before being set free on Sept. 2.