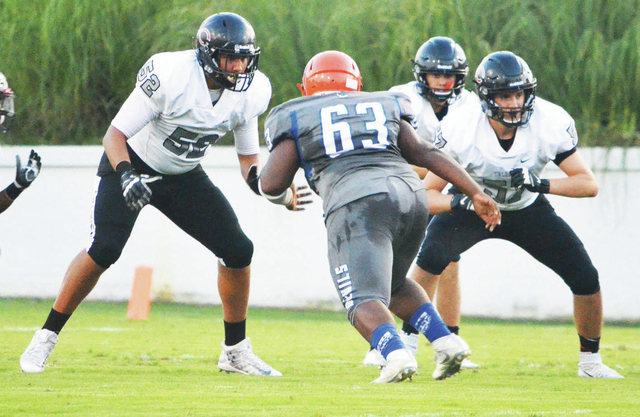 HOGANSVILLE – Once he found daylight, and saw an unobstructed path to the end zone, DJ Atkins wasn’t going to be denied.

Atkins, a junior running back for the Callaway Cavaliers, had 168 rushing yards in Thursday’s 28-7 win over Columbus, and the bulk of those yards came on two scoring plays.

In the first half, Atkins got the scoring started with a 63-yard touchdown run, and he added a 51-yard scoring run in the second half.

Callaway also showed off its prowess in the aerial game, with Dylan Johnson throwing scoring passes of 13 and 31 yards to Braylon Sanders.

Atkins, who transferred from Spencer High in Columbus, has made a massive impact in his first season at Callaway.

The running-back position was a question mark coming into the season.

Cedric Maynard ran for nearly 2,500 yards as a senior in 2015, and his graduation left a gaping hole to fill at that position.

Thanks to Atkins, though, Callaway has continued to get big plays in the running game.

“I feel like I can score on any play,” Atkins said following Thursday’s game. “It’s just a matter of being patient, and letting my blocks be there. I can’t be out of control. But I feel like when I’m in space, I can make plays.”

He proved that Thursday night.

On both of his touchdowns, Atkins took advantage of some nice blocking by the offensive linemen and fullback Jibrell Jackson, and once he got into open space, he used his speed to leave the Columbus defenders behind.

“He understands what we’re trying to do from the tailback position,” Callaway head coach Pete Wiggins said. “And he comes after a good play and tells the O-line good job.”

Although Atkins is a relative newcomer to the team, he said he already feels like a member of the family.

“It feels like home,” Atkins said. “It felt like home the first week. They brought me in, and showed me around. I love it. I got a quick connection.”

The big plays for Callaway weren’t limited to the running game on Thursday.

On the play right before that touchdown, Sanders made an outstanding, leaping catch in the back of the end zone, but his foot came down on the back line.

Johnson went right back to Sanders, and this time the result was a touchdown.

“When we run the ball a lot, the defenses look to me, and they back off Braylon,” Atkins said. “That’s when we go play-action and throw to Braylon. In one-on-one, it’s hard to stop Braylon. It’s always a winning situation.”

Most of Callaway’s running yards came from Atkins, although Jackson had some nice runs from his fullback position, and Johnson also had some positive runs.

In the passing game, junior DQ Wilkerson had a pair of long catches, including one that set up the first touchdown.

Leading the way is an offensive line that has been tremendous all season.

Callaway’s defense was up to the challenge in Thursday’s game as well.

The Blue Devils got a touchdown early in the second quarter, but it didn’t score again.

Kobe Jackson had a diving interception late in the game that clinched the victory.

“In the second quarter the defense played really well after they settled in,” Wiggins said. “I was really proud of both sides of the football.”

Callaway was coming off an emotional, come-from-behind win over Handley in its previous game.

Thursday’s game didn’t have that sort of drama or emotion, but Callaway still came out and did what it had to do.

“We knew it was going to be a good game,” Callaway senior linebacker Michael Freeman said. “We knew it wasn’t going to be emotional like Handley, but we knew we had to come in and go to work, and we came away with the victory.”

Callaway improved to 3-0, and it will be at home against Upson-Lee on Friday before wrapping up its non-region schedule the following week against Harris County.