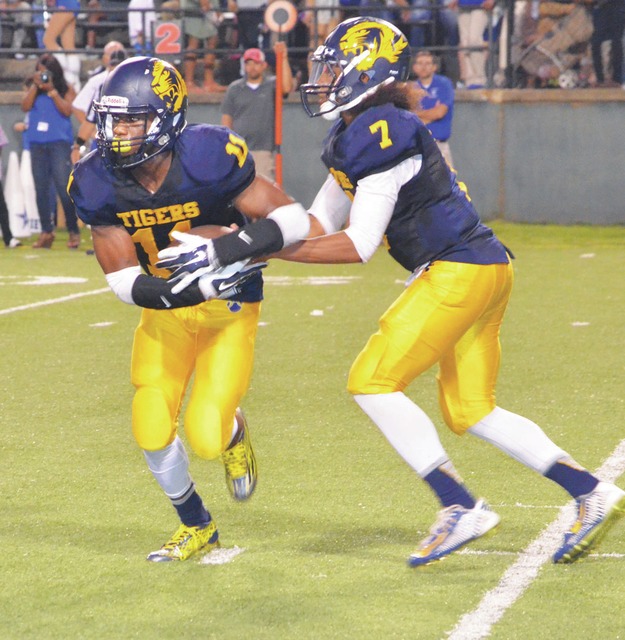 LAGRANGE – Life hasn’t been a whole lot of fun for the LaGrange Grangers the past two weeks.

After falling to Griffin 51-0 on Sept. 2, LaGrange returned home on Friday night hoping to find a bit more success against a strong East Coweta squad.

Unfortunately for LaGrange (1-3), the script was much the same as it was the previous week against Griffin, with East Coweta rolling to a 42-0 victory.

If there’s a silver lining for LaGrange it’s that all four of its games to this point have been against non-region foes, so there’s obviously still plenty to play for.

LaGrange is off next week, and it will begin its Region 5-AAAA schedule on Sept. 23 against Central-Carroll.

“We did some good things tonight,” LaGrange head coach Dialleo Burks said. “But we played seven sophomores, and three freshmen. So we’re playing the cards we’re dealt. But I’m not going to sit up here and make excuses at all. They won the game. My thing is, we can’t turn the ball over. We can’t have those types of mistakes, regardless of who is playing.”

Burks believes the Grangers will return from the off week ready to roll, with some injured players set to return, with the exception of all-state quarterback LaPerion Perry.

“We’ll pretty much have all of our guys back, except for LaPerion,” Burks said. “It’ll be a much different team.”

For East Coweta, it was more of the same.

With former LaGrange High head coach Steve Pardue at the helm, East Coweta has been taking care of business this season, cruising to a 3-0 record while outscoring those three teams 125-13.

It was Pardue’s first game at Callaway Stadium as a coach since he left LaGrange following the 2010 season to become an assistant coach at the University of Kentucky.

The pre-game routine was mostly the same for Pardue as it was when he was at LaGrange, with one noteable exception.

“Probably the strangest thing was when I type up my itinerary, at the end I always put at 7:30, beat whoever,” said Pardue, who is in his third season at East Coweta. “I never thought I’d put beat LaGrange. So that did feel different typing that.”

East Coweta controlled the game on both sides of the ball.

LaGrange’s offense was only able to find occasional success and it didn’t come close to scoring, while East Coweta’s running attack chewed up big chunks of yardage.

In the first half, East Coweta took a 28-0 lead after scoring touchdowns on four of its five possessions.

Fullback Carlos Ford had three touchdown runs, Jeremiah Gemmell had one scoring run, Devonte Brown had more than 100 yards on the ground, and quarterback Chris Reid was effective running the offense.

The Grangers’ first two possessions resulted in two punts and an interception, and they picked up their initial first down the third time they had the ball.

On third down, quarterback Nathan Cronic completed a 12-yard pass to Jalen Wilson, giving LaGrange a first down.

After losing yardage on the next two plays, Cronic found Jamari Thrash for a 19-yard completion, setting up fourth-and-four.

The Grangers picked up three yards on fourth down, but they were one yard short of the marker, and East Coweta took over at midfield and drove for another touchdown to take a 28-0 lead, which was the score at the break.

The second half began with LaGrange going three-and-out, and Brown then ripped off a 73-yard touchdown run to give East Coweta a 35-0 lead.

On its ensuing possession, LaGrange picked up a first down on an 8-yard completion from Cronic to Thrash and a 9-yard run by Myles Johnson.

The drive stalled from there, though, and LaGrange punted, and that led to East Coweta’s final touchdown on a short run.

It was a 42-0 game through three quarters, and the fourth quarter went quickly with a running clock.

LaGrange running back Cornell Kendrick looks for running room during the first half of Friday’s game. Kevin Eckleberry | Daily News

http://lagrangenews.com/wp-content/uploads/sites/37/2016/09/web1_LHS4-2.jpgLaGrange running back Cornell Kendrick looks for running room during the first half of Friday’s game. Kevin Eckleberry | Daily News

LaGrange’s Amad Ogletree gets a pass away.

http://lagrangenews.com/wp-content/uploads/sites/37/2016/09/web1_LHS11.jpgLaGrange’s Amad Ogletree gets a pass away.

LaGrange makes a gang tackle in the second half.

http://lagrangenews.com/wp-content/uploads/sites/37/2016/09/web1_LHS34.jpgLaGrange makes a gang tackle in the second half.