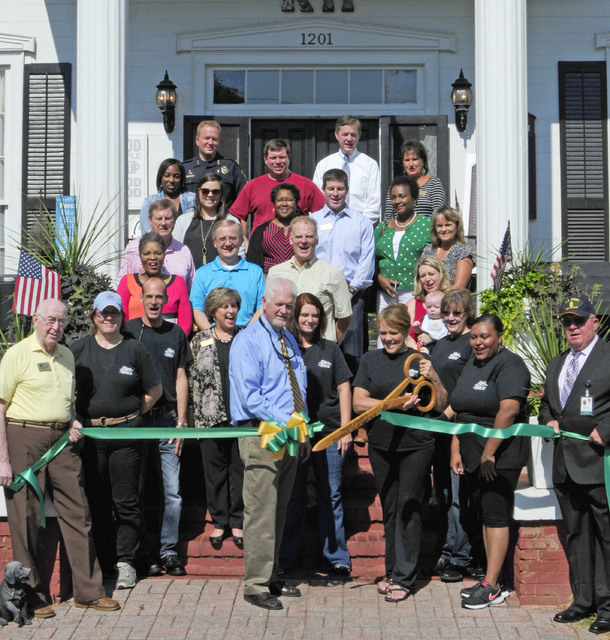 The house was built in 1869 by Nathan Lane Atkinson, a prominent lawmaker and businessman. It was the family’s home for three generations and the Barrontons, moving from Newnan, bought it in 2007 and turned it into a special events venue.

In May, the couple returned to their previous experience in restaurants and reopened the business as the River House, a buffet-style restaurant, incorporating Debbie Barronton’s Cakes by Debbie business.

“We had a restaurant in Newnan for 20 years, same style — buffet. We’ve always wanted a historical venue, something homey and bring people in to relax and enjoy not only the food, but the hospitality and the surroundings and everything,” said Mark Barronton. “And this house really lends itself to it. … It was really a socializing point for many years with (the Atkinson) family, and we’re hoping to bring that back.”

Cakes by Debbie was a staple in downtown LaGrange for several years, but Debbie Barronton decided to move the business home.

“It’s been exciting to move because we live down here, and I hated to leave the people in LaGrange, but it’s not that far, just down West Point Road,” she said with a smile.

“It’s nothing fancy, it’s just good food,” he said. “It’s food like your mother used to make, food that would come out of your mother’s oven.”

And then people can get confections from the bakery. Mark Barronton said many people leave the restaurant with boxes full of baked goods. They also offer catering, including Debbie Barronton’s signature cakes.

The Barrontons said in the last few months they have seen more repeat and regular customers.

“We like to look at people not as customers, but as friends, as people now we can say, ‘Hey, we know these people, they’re regulars, people we take care of on a regular basis,’” said Mark Barronton. “It’s a good feeling for us. That tells us they’re supporting us and that we’re continuing as a strong viable business for this area.”

“Debbie and Mark, we’re just as proud as we can be, and loving your food and loving having you down here,” he said. “So thank you so much.”

“Being downtown is so important to any community, and especially West Point with the way things are changing and being revitalized,” she told the Barrontons and community leaders who came out for the ribbon cutting.

The historic venue has undergone a physical and tonal revitalization for the new business.

“You can almost hear the house breath a sigh of relief,” said Mark Barronton. “It feels more lively, more perky, and that’s what we wanted to bring to West Point.”

People gather in the River House and Cakes by Debbie on Thursday during a ribbon cutting ceremony.

http://lagrangenews.com/wp-content/uploads/sites/37/2016/09/web1_web0912RiverHouse2.jpgPeople gather in the River House and Cakes by Debbie on Thursday during a ribbon cutting ceremony.

Mark Barronton holds a ribbon while his wife Debbie Barronton cuts it Thursday for their restaurant the River House in West Point.

http://lagrangenews.com/wp-content/uploads/sites/37/2016/09/web1_web0912RiverHouse.jpgMark Barronton holds a ribbon while his wife Debbie Barronton cuts it Thursday for their restaurant the River House in West Point.

Prayer for 9-11 set for Lafayette Square