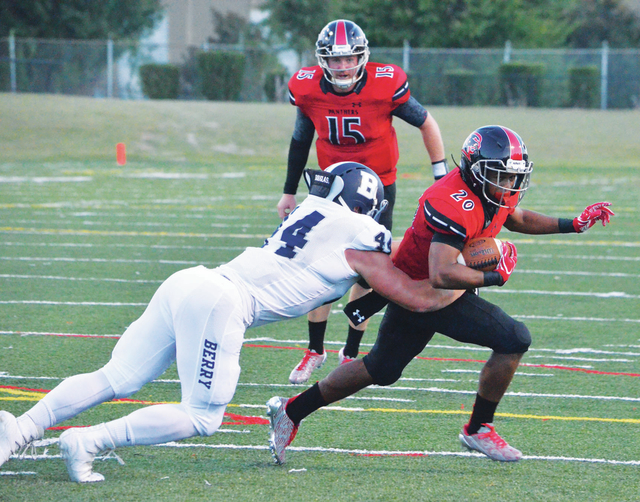 LAGRANGE – The LaGrange College Panthers ran up and down the field and compiled nearly 500 yards of offense and scored 37 points, but it wasn’t enough.

LaGrange College’s defense had no answer for Berry College, which found the end zone seven times on the way to a 52-37 victory on Saturday night at Callaway Stadium.

While Berry College did a lot of damage on the ground with 302 yards, five of its touchdowns came through the air, with quarterbacks Tate Adcock and Slade Dale combining for five scoring passes.

LaGrange College had fairly tight coverage on most of those touchdown passes, but Berry College’s receivers made some outstanding catches.

The Panthers, meanwhile, scored four touchdowns in the second half after they had to settle for three field goals in the first half.

It wasn’t enough, though, with Berry College scoring four touchdowns of its own in the final two quarters to match LaGrange College.

LaGrange College never got any closer than 15 points in the second half.

LaGrange College junior quarterback Connor Blair completed 31-of-49 passes for 360 yards with a touchdown, and he was nearly flawless in the second half while directing four scoring drives.

Blair also had a short scoring run in the second half, and Nicholas Searcy and Drew Lewiski had touchdown runs as well.

In the first half, the Panthers moved the ball well and got into the red zone three times, but they had to settle for a trio of Zachary Kudwa field goals of 32, 21 and 26 yards.

Berry made the most of its trips deep into LaGrange College territory in the first half, with Adcock throwing touchdown passes of 12 yards and 31 yards to Chris Lilly, and 15 yards to Trey Ciresi.

Berry College also got a 34-yard field goal from Mitchell Blanchard to take a 24-9 lead at the break.

Berry College built on its first-half momentum by going 61 yards in six plays to begin the third quarter, and Austin Lowe’s 17-yard scoring run put LaGrange College in a 31-9 hole.

In what would be a familiar pattern for the rest of the game, when one team scored, the other team responded with a touchdown of its own.

On its first possession of the second half, LaGrange College needed just nine plays to go 80 yards and score its first touchdown of the game.

Lewiski capped the drive with a 9-yard scoring run, and Kudwa’s first of four extra points cut Berry’s lead to 31-16 with 9:35 left in the third quarter.

Blair had long completions of 28 yards to Marsalis Jackson and 31 yards to Ervens Oge on the scoring drive.

Back came the Vikings, with Lowe’s 1-yard touchdown run putting the finishing touches on a 42-yard drive that was set up by a long kickoff return.

With Blair continuing to chew up Berry’s defense, LaGrange College needed less than four minutes to go 75 yards, with Josh Hardrick hauling in a 6-yard touchdown pass to make it a 38-23 game with 2:13 left in the third quarter.

Right before Hardrick’s touchdown, Searcy had a 19-yard catch out of the backfield to put the ball inside the Berry 10.

The teams combined for four touchdowns in the third quarter, and they duplicated that in the fourth quarter.

First it was Berry finding the end zone, with Lilly catching a 15-yard scoring pass from Dale, and the lead was 45-23 with 10:36 to play.

LaGrange College then went 69 yards in 10 plays, and Blair completed that drive with a 1-yard scoring run, and with 7:33 showing on the clock, Berry’s lead was 45-30.

The big play on that drive was a 42-yard completion from Blair to Jackson.

Berry’s offense could not be stopped, though.

The Vikings, after recovering an onside kick, went 50 yards in seven plays, and Ciresi’s 19-yard touchdown catch from Dale put the Panthers in a 52-30 hole with 3:44 to play.

They needed just a shade over two minutes to cover 79 yards, and Searcy’s 2-yard touchdown run and the extra point made it a 15-point game once again.

On a fourth-and-26 play, Blair found Lavelle Meeks for a 26-yard completion to midfield to keep the drive alive, and he hooked up with Patrick Goodin for a 39-yard pass play to set up Searcy’s touchdown.

Any hope the Panthers had ended with an unsuccessful onside kick, though.

Berry College ran three plays, and the clock ran out.

LaGrange College’s Marsalis Jackson runs after making a catch in the first half. Jackson had seven catches for 88 yards. Kevin Eckleberry | Daily News

http://lagrangenews.com/wp-content/uploads/sites/37/2016/09/web1_LC22-1.jpgLaGrange College’s Marsalis Jackson runs after making a catch in the first half. Jackson had seven catches for 88 yards. Kevin Eckleberry | Daily News