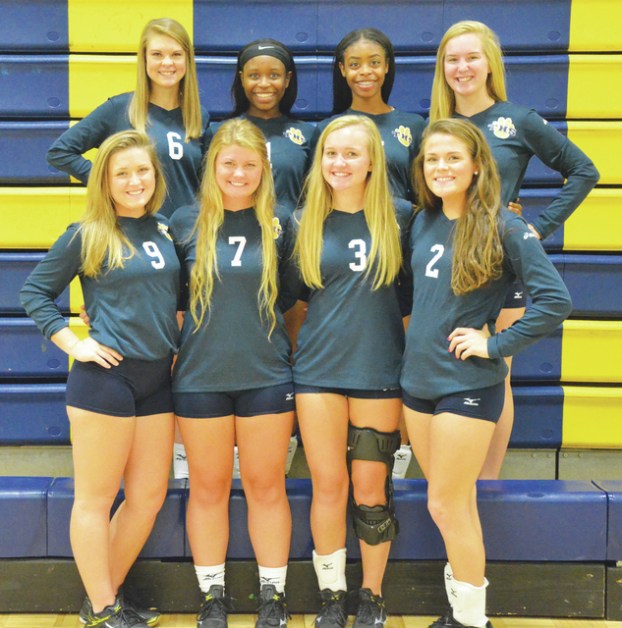 There are eight seniors on the Troup High volleyball team, and most of them have known each other since elementary school and have been playing the sport together for nearly a decade.

They may not be related, but they consider themselves to be sisters nonetheless, and they’re savoring the chance to play one final season together before they go their separate ways following graduation next spring.

“I wouldn’t want to play with anybody else,” said Tori Cason, one of those seniors. “They’re all my best friends, and we’re all really close. I just couldn’t imagine playing without them.”

Senior Savannah Laney said being a volleyball player at Troup, and being around people who mean so much to her, is “the most fun thing I’ve ever done.”

“I look forward to coming to practice,” she added. “Even though it’s hard, it’s still fun to be around everyone. It’s nice to be able to know I’ll be able to come and be around people I enjoy. It’s just fun.”

In 2014 the players had to deal with the tragic death of one of their teammates, and their head coach, Jodi Dowden, had a battle with cancer that she overcame.

Senior Madi Jeter said “everything that we’ve been through has been for a reason, and it really has brought us closer.”

“We’re family,” Jeter added. “We do everything together, and not just during volleyball season. Through the good times, and the bad times, we’re together.”

One of the seniors is Jayde Dowden, and these past five years have been particularly meaningful for her since she has been able to play for her mother, who is the head coach.

“It is special,” said Jayde Dowden, who along with Bailey Lawson has been starting since her ninth-grade year. “We’re always together. We’re always leaning on each other. If she needs something, I’m there. If I need something, she’s always there. It’s just been a great experience. I couldn’t imagine playing for any other coach. No other coach would compare.”

Jodi Dowden said coaching her daughter “doesn’t come without its challenges,” but she is grateful to have been able to spend so much time with Jayde.

“The rewards definitely outweight the challenges,” coach Dowden said. “I wouldn’t change it for the world.”

Jayde Dowden and most of her fellow seniors began playing together in the fifth grade for a local club team, and they also went to school together at Rosemont Elementary School.

Even before they got to high school they were close, and Jayde Dowden said everything they’ve gone through has only strengthened those relationships.

“We were already close, because we’ve been playing together since we were in the fifth grade,” Dowden said. “Then with everything else that’s gone on, we’re even closer. I couldn’t imagine playing with anybody else.”

Lawson recalls her eighth-grade year looking up to what was another large group of seniors.

“I remember walking in here and seeing the seniors and thinking that’s so far away,” she said. “And now I’m there.”

Lawson said no matter what has happened over the years, she and her friends and teammates were there for each other, and that the support was unwavering.

“During those hard times, we had to come together and push through,” she said. “Coming out here and just being able to talk about your day with your team, that’s one of the best parts of the day.”

While most of the seniors have been a member of the high-school team since they were in the eighth grade, two of them didn’t start playing volleyball until they were sophomores.

Akhea Mitchell was already friends with many of her soon-to-be volleyball teammates, so the transition was easy for her.

“We were classmates, and all of them were close,” Mitchell said. “Ever since then I loved it. I wish I could keep going with them.”

Akhya Mitchell played basketball and ran track as a freshman, and as she began her second year of high school, she decided to give a new sport a try.

She said she has enjoyed being a member of two different sports families.

“It’s been a great experience, even though it’s two completely different sports,” Akhya Mitchell said. “You have two different families you can go to. Because it’s more like a family than a team. It’s been great.”

Akhya Mitchell has been a three-sport athlete since she was a sophomore, and while she said that has been “really tough,” she has no regrets.

“The academics are challenging,” she said. “I maintain good grades, so I’m pretty good. But it gets really tough with the late nights, with volleyball, and then basketball season isn’t any better. And then I run track. I get no break. But I enjoy it, so I’m happy to do it.”

After reaching the state playoffs in 2013, Troup’s volleyball team has fallen short of reaching that goal the previous two seasons.

This year’s team appears poised to return to state.

Led by the seniors, Troup is having a strong season that included a tournament championship.

A lot of the team’s success is fueled by the camaraderie the players have.

“We’re like sisters,” senior Lauren Sheets said. “We read each other’s minds, because we’ve been playing together so long.”

Jeter said the familiarity the players have with each other comes across on the court.

Added Lawson: “We all have this chemistry that helps us know what we’re doing on the court. That helps us be the team that we are.”

Coach Dowden said this group of seniors has been a pleasure to work with.

“It makes it worthwhile to have a group that works hard, and they’re always here,” she said. “Whatever I ask them, they’re always like yeah coach. They really work together well as a team.”

At some point, perhaps in the state tournament, the seniors will play their final game together.

That’s a reality that is starting to sink in.

“I don’t want to even think about graduating,” Jayde Dowden said. “Our next home game is senior night, so I’m sad. It’s here already.”

For the players, the best way to go out would be making it to state and hopefully enjoying success there.

Troup’s seniors, most of whom have been playing together since they were in the fifth grade, are hoping to make it to the state tournament this year. Kevin Eckleberry | Daily News

http://lagrangenews.com/wp-content/uploads/sites/37/2016/09/web1_troup-seniors2.jpgTroup’s seniors, most of whom have been playing together since they were in the fifth grade, are hoping to make it to the state tournament this year. Kevin Eckleberry | Daily News

LAGRANGE – LaGrange College and Berry College have played twice, and both games have gone to overtime. In 2014, it... read more