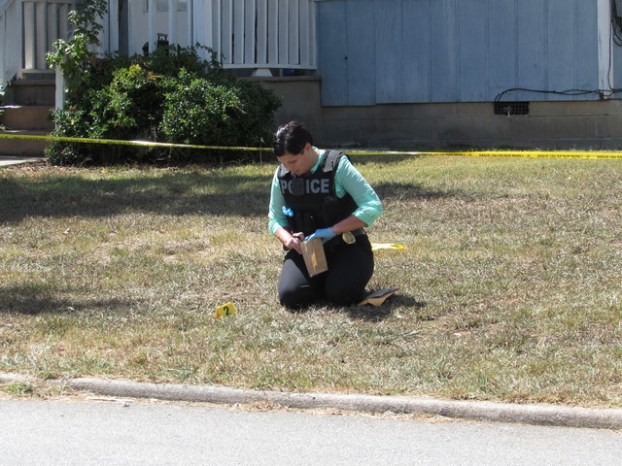 1 arrested for allegedly shooting at woman

LaGRANGE — One man was arrested after a mid-day shootout Wednesday that started after he allegedly opened fire on his ex-girlfriend in the 200 block of Burr Street.

Jerry Grier, 25, was taken into custody near the intersection of Burr and Dix streets, stated investigators with the LaGrange Police Department.

Grier allegedly fired one shot in the air on Niles Street after an argument with the victim before following the ex-girlfriend to the 200 block of Burr Street, where he started shooting at her, investigators stated.

Lt. Dale Strickland said the victim was among several people in the Burr Street area where Grier allegedly opened fire. One of the bystanders started firing back at Grier.

“We believe she was the intended target, but she was standing near this other individual (who shot back),” Strickland said.

The man who fired back at Grier voluntarily spoke to investigators at the LaGrange Police Department. No charges were expected against him.

“Based on what we know initially, it appears he was trying to protect himself and a third party,” Strickland said.

LaGrange police cordoned off at least three areas with crime tape, including a field near the Daniel Food Mart, as detectives processed the scenes and collected evidence.

LaGrange Police Detective Jennie Lawson collects evidence found in the front yard of a home in the 200 block of Burr Street following a shooting on Wednesday. No one was hurt in the incident.

http://lagrangenews.com/wp-content/uploads/sites/37/2016/09/web1_shooting5-3.jpgLaGrange Police Detective Jennie Lawson collects evidence found in the front yard of a home in the 200 block of Burr Street following a shooting on Wednesday. No one was hurt in the incident.

‘Creepy clowns’ not creeping into LaGrange

LaGRANGE — The stories of clowns creeping around neighborhoods or near schools seems to be myth, according to investigators with... read more