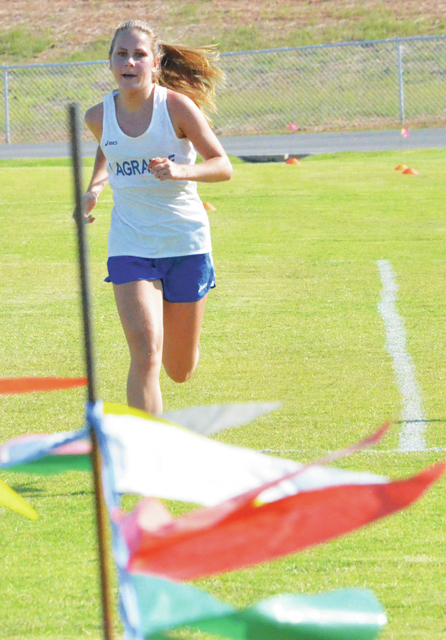 LAGRANGE – There was no suspense.

LaGrange High’s Alaina Tomlinson, who is putting the cap on a sensational cross-country career, took the top spot in a race at Lafayette Christian School on a sweltering Tuesday afternoon.

Tomlinson took control early in the 3.1-mile race, and she ended up taking the top spot with a time of 22 minutes, 36 seconds, and that was two minutes better than her closest competitor.

Tomlinson, a senior who has excelled in cross country since her freshman season, said she wanted to go out fast and seize control from the start, and that’s what happened.

“My plan was to do the first mile fast to get a good lead, and that’s what I did,” Tomlinson said. “I kept a pretty steady pace for the last two miles. Every race you’re supposed to get faster, so I just do my best.”

Tomlinson was coming off a stellar performance in the Carrollton Orthopedic Invitational on Saturday.

Competing on the course where the state meet will be held in November, Tomlinson had a time of 22:29 in that race, and she was right around that same time on Monday.

Tomlinson is following the training plan set forth by coach Brett Bowie, and she’s hoping to be at her best when state comes around.

“He has it set up where you peak (at state),” Tomlinson said.

LaGrange coach Tia Sheffield said Tomlinson, in addition to getting it done on the course, has been a tremendous leader for the less experienced runners.

“Her experience has been so invaluable to the team,” Sheffield said. “She’s been very helpful with the younger runners, figuring out what a certain pace feels like.”

One of those younger runners, sophomore Anna Brovoll, finished second in Tuesday’s race with a time of 24:57.

Next for LaGrange was another sophomore, Nikki Stansbury, who was ninth with a time of 27:59.

Leading the way for Troup was sophomore Catherine Leveritt (27:10), who finished in sixth place.

Troup coach Amber McWhorter said she appreciates the effort of all of the girls on the team.

“I always tell them, you’re going faster than everybody on the couch, and every week you only have to get better than you were last week,” she said. “Just be better than yourself.”

McWhorter added that as the season has gone alone, “we have improved drastically.”

For Lafayette Christian, the host school, the top finisher was sophomore Cate Skipworth (25:31), who placed third.