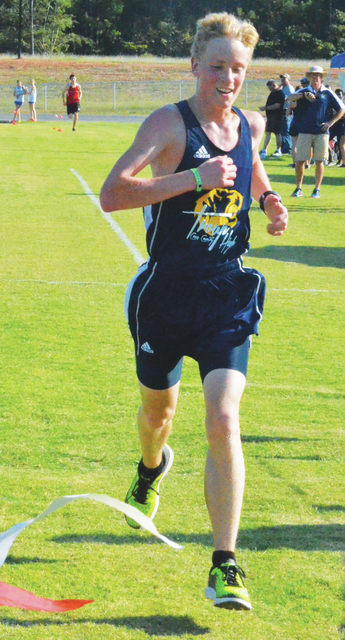 LAGRANGE – He had a strategy, and he stuck with it.

Coming into Tuesday’s cross-country race at Lafayette Christian School, LaGrange High’s Alex Bowie figured he would let somebody else lead the way until the end when he would surge to the front and be the first man across the finish line.

Sure enough, as Bowie hit the race’s home stretch, he was right on the heels of Tucker Sprayberry of Lee-Scott.

Scott had the narrow lead as the two approached the Lafayette Christian School football stadium where the finish line was located.

It was a steamy afternoon with temperatures near 90 degrees, and Bowie was physically spent, but he wasn’t about to come that close to winning and let someone else run away with the first-place medal.

“At the end, I was about to drop,” Bowie said. “But I thought I have to do this, and I just pulled it out.”

Once Bowie passed Sprayberry, it was no contest.

Bowie completed the 3.1-mile course in a time of 19 minutes, 28 seconds, and that was 10 seconds faster than Sprayberry.

Lafayette Christian’s Michael Loutzenheiser (20:00), who led early and was in contention much of the way, ended up placing fourth, and he was a few seconds behind Henry County’s Nicolas Thompson (19:53), who was third.

“Michael was setting a really fast pace coming out,” said Bowie, who was a teammate of Loutzenheiser’s at Lafayette Christian last year. “And then a guy from East Scott, he came up, and I passed him at the end.”

Bowie is in the midst of a superb freshman season, and he was coming off a seventh-place showing in the Carrollton Orthopedic Invitational on Saturday.

One of Bowie’s goals is to finish a race in less than 18 minutes, something he’s yet to accomplish.

Four of the top 10 finishers in Tuesday’s race were Grangers.

Callaway didn’t have any runners in the top 10, but it did claim four of the top 20 spots.

With Kemp and a handful of other young runners leading the way, the future looks bright for Callaway’s cross-country program.

“Out of my top seven, I only have one senior, and I only have one junior, and he wasn’t there today,” said Callaway coach Josh Ghobadpoor, who also leads the school’s wrestling program. “So the rest are freshmen and sophomores, so that’s really exciting. Calik, he finished 11th overall, and he’s never run cross country before in his life up until this year. So I see him only getting better.”

Ghobadpoor is pleased with the participation in cross country this season, and he said athletes in other sports are using it as a way to train.

“I had a lot of wrestlers out here,” Ghobadpoor said. “And there’s other people training for other sports. So bring ‘em on. If you want to get better, come out and we’ll condition.”

For Lafayette Christian, Loutzenheiser led the way with his fourth-place finish, and Alex Kliesch (22:10) and Serik Rosencrants (22:14) were 15th and 16th, respectively.

Runners from Troup and Lafayette Christian take off at the start of Tuesday’s race. Kevin Eckleberry | Daily News

http://lagrangenews.com/wp-content/uploads/sites/37/2016/09/web1_running2.jpgRunners from Troup and Lafayette Christian take off at the start of Tuesday’s race. Kevin Eckleberry | Daily News