Defense getting it done for Callaway 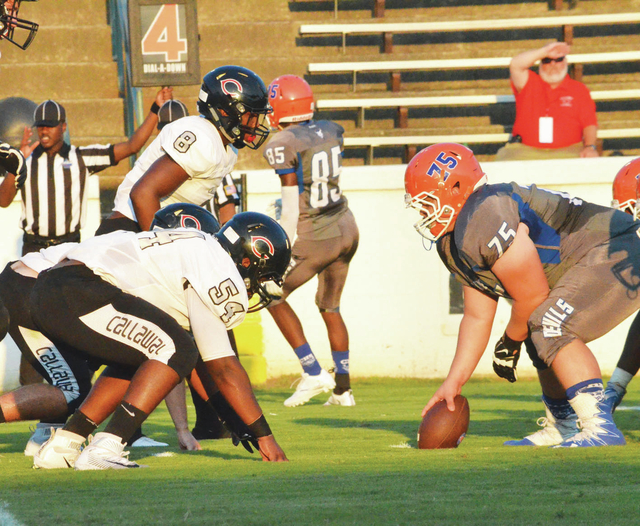 HOGANSVILLE – The Callaway Cavaliers are off to a perfect start, and a defense that has been giving opponents fits is a big reason why.

Callaway’s defense began the season by giving up one touchdown in a 37-6 victory over LaGrange, and that came in the fourth quarter after the outcome had been determined.

The following week against Handley, Callaway’s defense surrendered a few big plays and some touchdowns in the first half, but it didn’t allow any points in the second half of a 42-28 win.

Then against Columbus last week, Callaway allowed a touchdown early in the second quarter, but it tossed a shutout the remainder of the game in a 28-7 win.

Callaway (3-0) will look to keep it going on defense when it hosts Upson-Lee in a non-region game today, with kickoff set for 7:30 p.m.

Hubbard said the secondary has been a strength of the defense this season with veteran players Courtney Williams, Dominic Copeland and Kobe Jackson leading the way.

Freshman MJ Robertson, who had an interception return for a touchdown against LaGrange, has also excelled when given an opportunity.

In last week’s win over Columbus, Jackson had a diving interception late in the fourth quarter that clinched the victory.

“I think the strength of what we’ve tried to do so far has probably been our back end,” Hubbard said. “They’ve been really good.”

Callaway has also been getting it done closer to the line of scrimmage.

Callaway’s defensive line, which only had one returning starter in Keegan Woods, has been solid.

Thomas Hodge, who was a linebacker last season, has moved to the defensive line this season and has played well.

“He was a linebacker for three years and he moved just out of necessity,” Hubbard said of Hodge. “We know he’s a football player and a tough kid. He knows the tendencies of our defense.”

Hubbard said a bright spot up front has been the performance of junior linebacker Jonathan Leonard, who leads the team in tackles.

Leonard’s performance was particularly timely in the first two games against LaGrange and Handley with senior linebacker Michael Freeman slowed because of cramping issues.

“He’s had a really good year,” Hubbard said of Leonard. “He’s leading us in tackles. A lot of it has to do with Mike not playing in the second half of the first two games. Jonathan is averaging 10 tackles a game. He’s around the ball. He finds the ball.”

Hubbard believes the defense will continue to improve as some of the less experienced players continue to adjust to varsity football.

Among those players are three freshmen, Jacob Freeman, Robertson and Cartavious Bigsby.

Callaway also has its share of veterans, including Woods, Freeman, defensive lineman Jamie Sellers, and the men in the defensive backfield.

“Those are the guys you don’thave to worry about,” Hubbard said. “They know what to do. Jamie Sellers, Keegan Woods. And Mike. Those guys are guys that understand what we’re trying to do. They’re the leaders. When there’s some uncertainty of where we’re going, they always take control.”

After today’s game, Callaway will visit Harris County next week before taking a week off before the start of Region 5-AA play.

Callaway’s defense gets in position before the snap during last week’s 28-7 win over Columbus. Kevin Eckleberry | Daily News

http://lagrangenews.com/wp-content/uploads/sites/37/2016/09/web1_CHS38.jpgCallaway’s defense gets in position before the snap during last week’s 28-7 win over Columbus. Kevin Eckleberry | Daily News