It was Troup’s day to shine 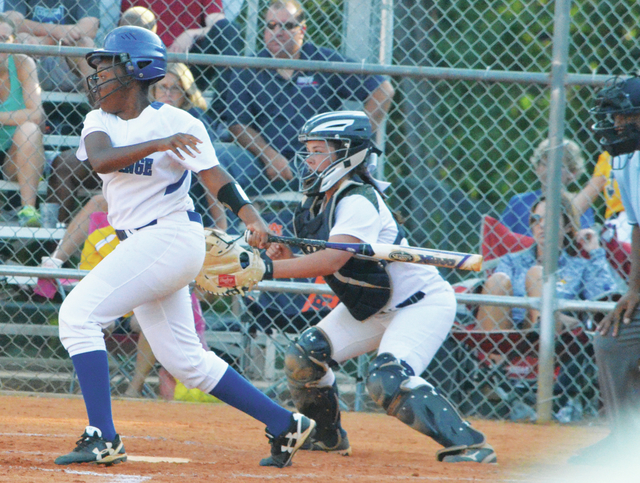 LAGRANGE – It was their day.

A little less than a month ago, the Troup Lady Tigers made the cross-town trip to play the rival LaGrange Lady Grangers, and things didn’t go well.

Troup had some costly defensive miscues and lost 8-2.

On Thursday, those two teams locked horns once again, and the outcome was a different one this time around.

It was a close, hard-fought game, and Troup pushed a pair of runs across in the bottom of the sixth inning on the way to a 4-2 home victory in the Region 5-AAAA showdown.

Junior pitcher Abby Taylor was sharp, throwing a seven-inning complete game with a career-high eight strikeouts, and freshman Skye Loftin had the game-winning hit, an RBI triple in the sixth inning.

Troup has now won two of three games against LaGrange this season.

They split their two region games, and Troup beat LaGrange 9-6 in a non-region game at Callaway High.

The teams could end up playing again in the region tournament.

“Like I told them, a win’s a win,” Troup head coach Mason Brackett said. “Anytime you beat your rival, and take two of them from them during the year, you’ll take that.”

Troup’s defense, which has had its issues at times this season, delivered a superb performance against LaGrange with just one error, much to the delight of Taylor.

“I really appreciate them having my back,” Taylor said. “I know they’re giving 100 percent for me. It really helps mentally to have them.”

The game was deadlocked at 2-2 when Loftin stepped to the plate with one on, and she drove the ball the opposite way for the RBI triple.

Loftin did a great job of going with the pitch and driving it to right field, and Brackett said that’s something the players work on in practice.

“We do that a lot. In our batting practice, we take rounds of opposite field,” Brackett said. “We work on everything.”

Cierra Gilbert followed with an RBI single to give Troup a two-run cushion heading to the bottom of the seventh.

Troup jumped out to the early lead with two runs in the bottom of the first inning.

Kayla Lane led off with a base hit, and after stealing a base, she scored when Maddie Weathers reached on an error.

Madison McCartney followed with an RBI single, and Troup led 2-0.

LaGrange fought back and pulled even with single runs in the second and fifth innings.

In the second inning, Shaq Sutton reached on a one-out single, and Katelynn Mobley followed with an infield hit before Katelyn Hill drove in a run with a groundout.

With the tying run on base, Taylor got an inning-ending strikeout to keep it a 2-1 game.

LaGrange broke through for the tying run in the fifth inning.

With one out, Te’a Winston and Kayla Montieth had back-to-back singles, and Lauren Kuerzi’s groundout drove in the tying run.

It remained a 2-2 game until the decisive sixth inning.

With one out, McCartney reached on an error, and Loftin followed with the go-ahead triple.

With two outs, Gilbert had an RBI single, and Troup had a two-run cushion.

Winston legged out an infield single with two outs in the top of the seventh, but she was left stranded as Troup held on for the win.

Taylor gave up six hits and one earned run in seven innings, and she didn’t walk anyone while striking out eight.

The Troup Lady Tigers celebrate after getting a 4-2 win over LaGrange on Thursday in a region game. Kevin Eckleberry | Daily News

http://lagrangenews.com/wp-content/uploads/sites/37/2016/09/web1_troup1-4.jpgThe Troup Lady Tigers celebrate after getting a 4-2 win over LaGrange on Thursday in a region game. Kevin Eckleberry | Daily News

LaGrange’s Katelyn Hill had an RBI groundout to drive in one of her team’s two runs. Kevin Eckleberry | Daily News

http://lagrangenews.com/wp-content/uploads/sites/37/2016/09/web1_troup11-12.jpgLaGrange’s Katelyn Hill had an RBI groundout to drive in one of her team’s two runs. Kevin Eckleberry | Daily News