Plan comes together for Tigers 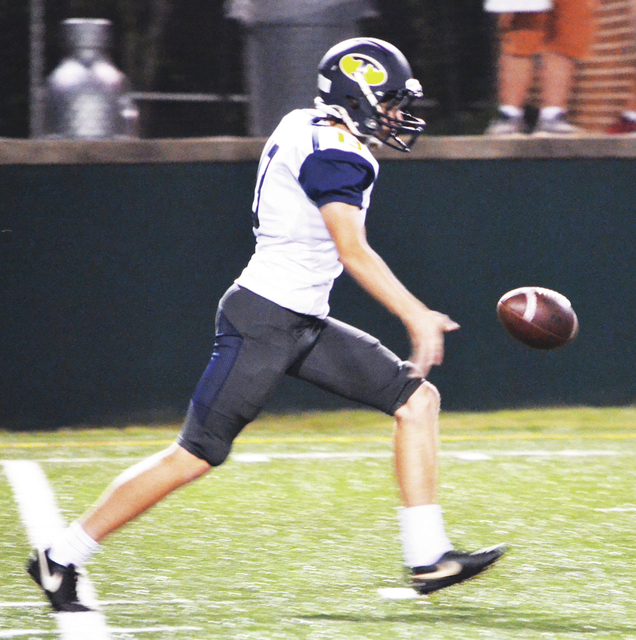 LAGRANGE – It’s all coming together for the Troup Tigers.

As the Tigers prepared for a new season, second-year head coach Tanner Glisson believed his team was dramatically better than it was a year ago.

Through four games, Glisson has been proven right.

After dropping its season opener to Hardaway, Troup has ripped off consecutive wins over Kendrick, Bowdon and Lamar County, and it has scored a combined 113 points in those games.

The Tigers are getting it done in all phases of the game.

The big-play offense led by quarterback Montez Crowe has been explosive, an inexperienced defense has performed well and is getting better game by game, and the special-teams play has been exceptional.

Troup is off this week, and it will try to make it four in a row when it hosts Chapel Hill on Sept. 23 in its Region 5-AAAA opener.

“We’ve had a pretty good stretch,” Glisson said. “With the momentum, it’d be nice to keep on playing.”

A lot of Troup’s success so far can be attributed to an offense that has been rolling.

Leading the way is Crowe, a junior quarterback who has looked increasingly comfortable running the Troup offense.

Crowe has completed 33-of-68 passes for 735 yards, and he has eight touchdowns and two interceptions.

Crowe’s best game was his most recent one.

When the 2015 season ended, it was evident the quarterback position was going to be Crowe’s, and he worked diligently in the offseason to prepare for that role.

“That came from the offseason, from all the work he put in, and all the work coach (Paul) Brewer put in with in with him,” Troup offensive coordinator Kelby Holt said. “He studies, he works, and does everything a quarterback needs to do. He can do whatever you ask him to do.”

Crowe’s favorite target has been Kobe Hudson, who is having a remarkable freshman season.

Six of Hudson’s 11 catches have gone for a touchdown, and he’s averaging 34 yards a reception.

Senior running back Camren Russell has been a threat out of the backfield with five catches for 118 yards, and he’s also amassed 192 yards on 27 carries with four touchdowns.

Jackson Davis has added 157 yards on 35 carries with two touchdowns, and Crowe has scored a pair of rushing touchdowns as well.

“We’re very balanced on offense,” Holt said. “We’ve got a lot of people that can make big plays. They’ve all stepped up to the plate.”

Holt added that having a solidified offensive line has made a big difference.

“A lot of that comes from the offensive line. They’ve settled in,” Holt said. “We know who those five are, and they’ve done a great job.”

Troup had a lot of defensive question marks coming into the season.

Glisson knew it was going to be an inexperienced unit and that there would be growing pains, but the defense has been terrific.

Micah Alba was brought in by Glisson to be the defensive coordinator, and he has been impressed with the attitude of all of the players on that side of the ball.

“They’re going to listen to what we ask them to do, and they’re hungry to win,” Alba said. “They’ve been real receptive. We’ve got a lot of young guys that still have a lot of learning to do. But, every time the play, they learn something else, and they keep getting better. So we just try to build on the successes, and learn from the mistakes and try not to repeat those things.”

A turning point may have come in a 28-27 win over Bowdon.

For much of that game, Bowdon’s offense was unstoppable, but Troup made two huge stops in the fourth quarter.

“They understood that once we fixed the things we were doing, we could stop them,” Alba said. “They just kept believing. We were all on the same page, and we got rolling the last few possessions. It was great to see them finish like that.”

Then last week against Lamar County, Troup’s defense did a stellar job on a multi-threat quarterback.

“They did a great job of not giving him lanes to run through,” Alba said. “And we had good coverage behind him so there was no one to throw to.”

In the Lamar County game, sophomore defensive lineman Kaliff Thornton had 11 total tackles, and three of them were behind the line of scrimmage.

Linebackers Kevin Martin and Jarred Lane had 12 and 11 tackles, respectively, and Stafford had six tackles from his defensive-back position.

Troup’s kicking game has been a strength since Day 1.

How much of an impact special teams can have on a game was on display during one stretch in the first half against Lamar County last week.

Junior Carson Wreyford had a 47-yard punt that was downed at the 2-yard line.

The defense made a stop, and Hill field a punt at midfield and returned it to the Lamar County 25-yard line, and Troup scored moments later.

“Wreyford hits a 47-yard punt, and he kills it on the 2-yard line,” Troup special-teams coach Lynn Kendall said. ” We play defense, they punt it out of their own end zone, and we field it on the 50 and return it to the 25. It’s first and 10 on the 25. That’s a good indication of moving the ball with the kicking game and then executing.”

Wreyford had two punts in that game for a 45-yard average, and Lamar County had a negative three return yards.

Wreyford was also perfect on five extra-point attempts, and he five of his seven kickoffs went into the end zone.

In the return game, Hill had the 25-yard return that set up a touchdown, and Russell had a 46-yard kickoff return.

Troup spends a healthy amount of time each day working on special teams.

“We spent a lot of time on blocking, covering drills, long snapping, the whole game,” Kendall said. “We spend special-teams time instead of it being an afterthought. It’s been very good.”

Without a game to prepare for this week, practice has been a bit shorter for the varsity players, and that has given Glisson and the other coaches some additional time to work with the younger members of the team.

“We cut practice down by about 45 minutes on Monday and Tuesday, and started working the young kids, and the JV, just trying to coach them up a little bit,” Glisson said. “That’s something we’ve neglected a little bit, because everything has to happen in due time. Now we can go to the next level and even Long Cane. That’s the next step”

The Troup Tigers get ready to charge onto the field for the start of a home game against Bowdon. Troup has won three straight games to improve to 3-1. Kevin Eckleberry | Daily News

http://lagrangenews.com/wp-content/uploads/sites/37/2016/09/web1_troup3-3.jpgThe Troup Tigers get ready to charge onto the field for the start of a home game against Bowdon. Troup has won three straight games to improve to 3-1. Kevin Eckleberry | Daily News

Troup quarterback Montez Crowe fakes a handoff to Camren Russell during a game this season. Crowe and Russell are key parts of a big-play offense. Kevin Eckleberry | Daily News

http://lagrangenews.com/wp-content/uploads/sites/37/2016/09/web1_troup15.jpgTroup quarterback Montez Crowe fakes a handoff to Camren Russell during a game this season. Crowe and Russell are key parts of a big-play offense. Kevin Eckleberry | Daily News