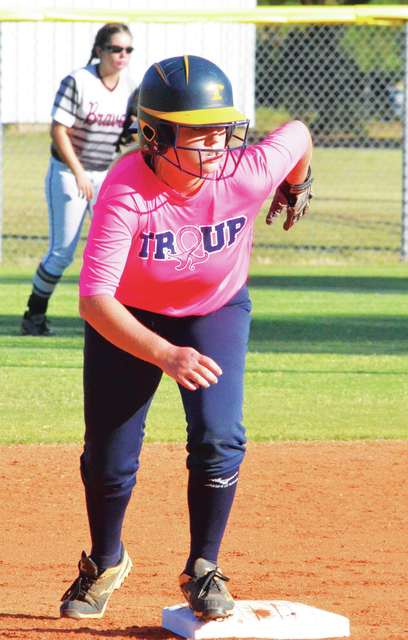 LAGRANGE – They’re looking for some payback.

The Troup Lady Tigers came into their softball game on Aug. 23 with the rival LaGrange Lady Grangers having won seven of eight games.

Troup’s hot streak came to a halt on that August afternoon, though, with home-standing LaGrange rolling to an 8-2 victory.

Those two rivals will meet again today, and this time Troup will serve as the host team.

Troup tuned up for the LaGrange game by playing a strong Heard County team on Tuesday, and it lost 5-2.

The stakes will be a lot higher today.

It’s not only a rivalry game, but it’s also a Region 5-AAAA showdown as both teams fight for position heading into the home stretch of the regular season.

In Wednesday’s game, it was all about missed opportunities for Troup.

The Lady Tigers did manage to put two runs on the board, but they left more than 10 players on base, and twice they were unable to score after loading the bases.

After a scoreless first inning, Heard County scored an unearned run in the top of the second inning to take the 1-0 lead.

Troup loaded the bases but came up empty in the bottom of the second, and Heard County added two more runs in the top of the second to push the lead to 3-0.

Troup broke through for a run in the bottom of the third to get within two.

Abby Taylor led off with a single, and Maddie Weathers came through with an RBI single later in the inning to make it a 3-1 game.

Both teams scored a run in the fourth inning.

In Troup’s half of the inning, Kinley Stanford reached on an error leading off, and Cierra Gilbert moved her over with a sacrifice bunt before Andrea Nix delivered an RBI single from the number nine spot in the order.

Troup had its chances after that.

In the sixth inning, Nix walked, Taylor reached on a bunt single, and Kayla Lane walked to load the bases with one out, but Troup was unable to cut into what was at that point a 4-2 deficit.

Heard County added an insurance run in the top of the seventh inning to complete the scoring.

Troup’s Skye Loftin gets a lead off of second base during Wednesday’s game. Kevin Eckleberry | Daily News

http://lagrangenews.com/wp-content/uploads/sites/37/2016/09/web1_softball2-14.jpgTroup’s Skye Loftin gets a lead off of second base during Wednesday’s game. Kevin Eckleberry | Daily News