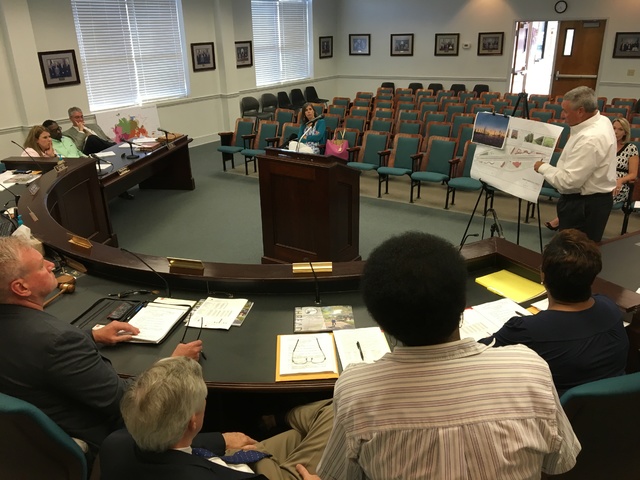 LaGRANGE — After spearheading the creation of a solar-powered station to charge electric vehicles, the Ray C. Anderson Foundation still has plans to harness the sun for The Ray.

The Ray is the name for the section of Interstate 85 between exit 2 in West Point and exit 18 at Lafayette Parkway, which has been expanded to include the Georgia Visitor Information Center in West Point. It is working in conjunction with the Georgia Department of Transportation and other groups to create a green corridor on the highway that they hope will be defined by zero emissions.

In addition to plantings to help pollinators with the addition of plants and rubberized concrete for the road, Harriet Langford of the Ray C. Anderson Foundation told LaGrange City Council members during a meeting Tuesday about plans to install solar panels near I-85 exit 14 at Hamilton Road. The panels are possible because of an award from Georgia Power.

“We were awarded one megawatt from Georgia Power, and this is a (Public Service Commission), Georgia Power and (Georgia) DOT partnership,” said Langford. “GDOT provided the land, and we are probably going to be looking at exit 14 for our installation of solar which we think will be quite the wow.”

Georgia Power awarded The Ray with the project in July, and the pilot demonstration will be required to be completed by 2019. The solar power pilot on The Ray is part of Georgia Power’s updated Integrated Resource Plan, which is expected to add 1600 megawatts of renewable energy by 2021, according to the plan.

“What we would learn from any technology, would benefit us locally,” Landa said. “Wouldn’t it be great if our little 18-mile stretch of highway became something (that other cities and counties) came to study?”

The visitor’s center in West Point currently has a solar powered car charging station that is free to the public. The center is on the section of interstate between Montgomery, Alabama, and Atlanta with no places for drivers of electric cars to recharge. Project organizers said they were excited about how frequently the station has been used since it’s installation in October 2015.

The Georgia visitor’s center in West Point, where installation of the pollinator garden is scheduled, is also scheduled to receive several other amenities through the Ray Foundation.

The Ray project has recently gained permits to install a sample section of solar roadway at the Georgia welcome center in West Point using materials innovated by Wattway under the Colas Group, a French company that specializes in construction and maintenance of transport infrastructure.

“These are solar panels that can actually lay on top of the existing road, so this is a brand new product for the United States,” said Langford. “We are going to be showcasing it in the fall, so we’ll be getting it installed. So it’s a roadway. You don’t have to tear the road up; it lays onto the road. There is a special adhesive that holds it. It adds friction to the top. It’s passed all safety regulations in Europe.”

In addition to the charging station, there are also plans for The Ray to provide the visitor’s center ways to check tire pressure and a tire compressor to improve fuel economy of cars on the section of the road. The U.S. Department of Energy estimates that drivers can improve fuel economy by 0.06 to 3 percent with proper tire inflation.

“We are bringing WheelRight from Europe,” said Langford. “This is a rollover tire pressure monitoring system, and it also checks your tread depth with cameras and radar, and then it prints out a ticket that says the pounds of each tire. Then you open your door, and you see, ‘alright I’m low,’ or ‘I’m okay,’ most cars have a little sticker on the inside of the door that lets you know what your tire pressure should be.”

Mayor Jim Thornton on Tuesday asked City Manager Meg Kelsey to come up for a plan and possible funding for the City Council to consider in regard to supporting The Ray. No formal action has been taken.

Landscape architect Gary Gullatte talks to LaGrange City Council, city staff and a meeting attendee on Tuesday about design ideas for The Ray, a 16-mile stretch of road on Interstate 85 between West Point and LaGrange planned to use sustainable materials and promote zero emissions.

http://lagrangenews.com/wp-content/uploads/sites/37/2016/09/web1_web0916TheRay02-3.jpgLandscape architect Gary Gullatte talks to LaGrange City Council, city staff and a meeting attendee on Tuesday about design ideas for The Ray, a 16-mile stretch of road on Interstate 85 between West Point and LaGrange planned to use sustainable materials and promote zero emissions.