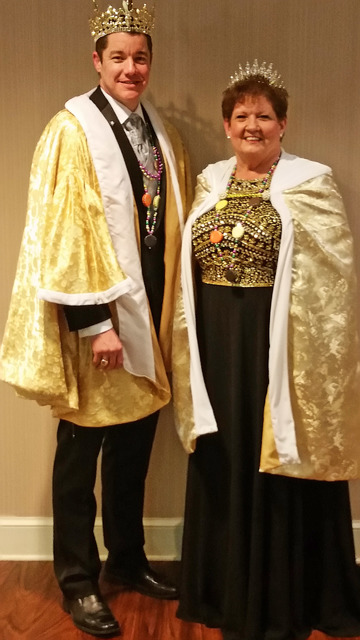 LaGRANGE — It is not very often people can add the titles of king or queen in front of their names, but it has become a tradition for folks in Troup County.

For four years, citizens around the community have voted in the royal leaders after their campaign season for the Twin Cedars Youth and Family Services Behind the Mask Ball in February.

The organization is getting a head start for the 2017 event, and taking nominations for the next king and queen.

“We have four committed candidates this year who are going to be great,” said Lisa Wicker, senior marketing coordinator for Twin Cedars. “We’d like to get a little competition going between the businesses, the schools and the coaches. We’d also like to involve first responders and get some friendly competition going there too.”

The agency hopes to find 16 candidates to fill their royal court – eight men and eight women. The nominated group will learn more about the organization. They will then individually campaign for a month to garner votes and raise money for Twin Cedars. The man and woman with the most votes by money raised at the end of that month will be crowned king and queen of the Behind the Mask ball.

“We’re looking for someone who does not mind asking for funding and who is willing to be an ambassador for Twin Cedars and believes in our mission,” explained Wicker. “They should be willing to commit to raising at least $1,000 on behalf of Twin Cedars. Many people set their monetary goal higher, but we ask for at least $1,000.”

Dale Jackson, owner and partner of Jackson Heating and Air, was part of the royal court last year.

Several candidates got creative and sold chili and chocolate pies to raise money, said Wicker. One even held a barbecue luncheon. Others used social media sites and called their acquaintances.

By the end of the campaign, the royal court raised a combined $70,000, more than double what the candidates collected in 2015, Wicker stated. Dale Jackson and Pam Herndon collected the most money and was crowned king and queen of the ball.

“I was excited to learn that our group raised almost twice as much as the previous group of candidates,” said Jackson. “I hope to use the experience the I gained to help a new group of candidates raise even more than we did last year.”

Overall, the 2016 Behind the Mask event obtained $107,000 in donations, Wicker said. It was the largest amount raised in the history of the event.

The funds were used to expand Twin Cedars’ foster care program, which increased the number of children that could be placed in temporary homes, Wicker explained. The money also funded a special camp for teen moms in the Circle of Care program, trained more people on the signs of child abuse through the Darkness to Light courses and allowed the Community Counseling program to provide pro bono services to children and youth in crisis.

“Clearly, last year’s group took the Behind the Mask grass roots fundraising to a whole new level,” said Wicker. “… We want our candidates this year to have enough time to plan those sort of events in support of their candidacy. … We need a great field of candidates who are committed … whether we surpass last years goals or we don’t, we believe the support of the community will carry us through.

“It is a lot of work,” Wicker added. “But it’s a fun event and each year you make new friends in the community and you meet new candidates. Those are friendships that remain beyond the event. Just to see what we accomplish as a community on behalf of the children is amazing. I never thought in a town the size of LaGrange we would break the $100,000 barrier, but there are a lot of people with heart in this town.”

Anyone wishing to nominate themselves or someone else for the Behind the Mask royal court can do so by emailing Lisa Wicker at lwicker@twincedars.org. Applicants will be asked to fill out a formal nomination form.

The forms must be submitted to Twin Cedars by Oct. 7.

Anyone wanting more information on the fundraising events or the 2017 Behind the Mask Ball contact Joanna Angstadt with Twin Cedars at 706-298-0050, ext. 1050.

Dale Jackson and Pam Herndon as king and queen of the 2016 Behind the Mask Ball. The event raises money for Twin Cedars Youth and Family Services. The group is now seeking candidates for the 2017 fundraiser.

http://lagrangenews.com/wp-content/uploads/sites/37/2016/09/web1_Behind-the-Mask.jpgDale Jackson and Pam Herndon as king and queen of the 2016 Behind the Mask Ball. The event raises money for Twin Cedars Youth and Family Services. The group is now seeking candidates for the 2017 fundraiser.