Cavaliers show off their aerial attack 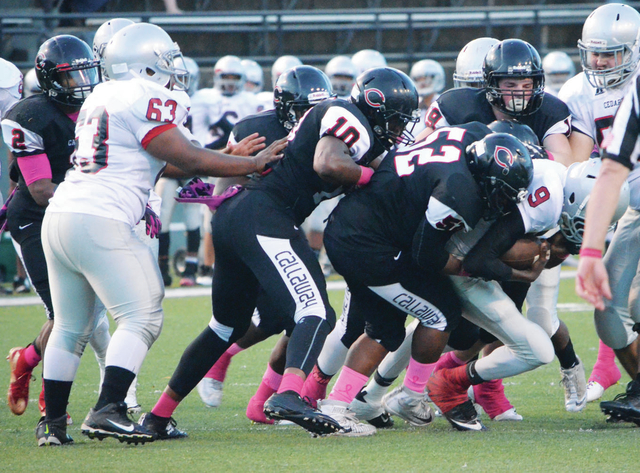 For the home team, that was not an indication of things to come.

Callaway’s passing game, which has been producing big plays throughout the season, continued that trend on homecoming night at Callaway Stadium.

After throwing a pick on his first pass attempt, Johnson was a perfect 5-for-5 for the rest of the half, and three of those completions went for touchdowns.

It was part of a balanced offensive effort for the Cavaliers.

Junior running back DJ Atkins had more than 200 yards in the game, and the bulk of that came during an explosive first quarter.

Once the running game was established, Callaway started making plays through the air, with Braylon Sanders, Michael Freeman and Khaliq Swift all coming through with scoring catches.

Callaway scored touchdowns on four of five possessions at one point in the first half to build a 34-0 lead, and it held a 34-7 lead at the half.

Neither team put any points on the scoreboard in the second half, and it was Callaway taking the 34-7 win to improve to 4-0.

Callaway also scored a defensive touchdown, with Kobe Jackson returning a pick for a score during the decisive first half.

For Callaway, it has all come together this season on offense.

Atkins has been a marvel.

He has close to 700 yards with three touchdowns in four games, and he has a bunch of long runs.

In Friday’s game, Atkins had three runs of 40 yards or longer in the first half, and he had a 65-yard touchdown run that was negated by a penalty.

Opposing defenses are obviously going to focus on Atkins, and that opens things up for Johnson in the passing game.

“We’ve got DJ, and people will bite up on him, so any play fake, I’ll be wide open,” said Sanders, a big-play receiver who is being recruited by numerous college teams.

When Sanders finds himself in single coverage because of the attention defenses pay to Atkins, that’s a recipe for success.

In Friday’s game, the Cavaliers were already up 20-0 when they got the ball at the Knights’ 25-yard line following a botched punt attempt.

On the next play, Callaway offensive coordinator Matt Napier dialed up a pass play.

Johnson, Callaway’s left-handed quarterback, dropped back and tossed a 25-yard scoring pass to Sanders who had a couple of steps on his defender.

It looked like Atkins had scored a touchdown on a 65-yard run, but a flag came down at the end of the play and Callaway was called for a hold.

On a first-down play, Johnson found his tight end, Freeman, open in the back of the end zone for a 16-yard touchdown.

Johnson helped the Cavaliers advance the ball down the field with a 20-yard keeper on a third-and-long play, and Atkins had a 25-yard carry to put the ball on the 28-yard line.

Johnson rolled out and rifled the ball to Swift at about the 10-yard line, and the senior raced the rest of the way for the touchdown.

Swift, a multi-sport athlete at Callaway who is also a standout in wrestling and soccer, had his first varsity touchdown.

The man pulling the triggers on the touchdown passes is Johnson, who is just as comfortable throwing on the run as he is sitting in the pocket and delivering the ball.

“That really helps having a quarterback that can scramble and throw the ball,” Swift said.

“It was great blocking by the O-line,” Sanders said.

Sanders has been Johnson’s most popular target and he has a touchdown catch in every game (including two against Columbus), but there are plenty of other weapons in the passing game as well, and they were on display in Friday’s game.

DQ Wilkerson has also made a number of catches this season, and he had a long touchdown in the opener against LaGrange.

Johnson has even gotten into the act with a touchdown catch from Sanders on a trick play in a win over Handley.

“We work on everything,” Sanders said. “Everything we do out here, we work on in practice, and we just try to get better every single day.”

On Callaway’s first possession of Friday’s game, Atkins had a 45-yard run to put the ball in Upson-Lee territory.

When the Cavaliers got the ball back, Atkins had a 44-yard run, and he followed that up with a 3-yard touchdown run to put the first points on the scoreboard.

On Callaway’s third possession, Napier called a trick play that nearly resulted in a touchdown.

Atkins took a handoff from Johnson, and instead of taking off running he dropped back to pass and just over-threw Wilkerson, who was streaking wide open down the right sideline.

A penalty knocked the Cavaliers back and they had to punt, but when they got the ball back, they scored on three consecutive possessions.

First it was Johnson’s scoring pass to Freeman with 17 seconds left in the first quarter, and after an unsuccessful two-point attempt it was a 13-0 game, and the onslaught was on.

Jackson, part of a stellar defensive effort by the Cavaliers, returned an interception about 40 yards on Upson-Lee’s next offensive play, and just like that it was 20-0.

Upson-Lee’s next possession ended with the bad snap on a punt that gave Callaway the ball in excellent field position, and Johnson then connected with Sanders for the score.

After an Upson-Lee punt, Callaway went 82 yards on a drive that ended with Swift celebrating his breakthrough touchdown.

Following a halftime homecoming ceremony where Freeman was crowned homecoming king, the Cavaliers were conservative on offense in the second half and didn’t score, but the damage had been done.

“In the first half, we were able to run the ball, and that opened up the passing game,” Callaway head coach Pete Wiggins said. “Dylan did a great job throwing the ball, and we had some big cathes from Khaliq and Braylon. And DJ ran the ball hard, and the guys up front blocked hard.”

Khaliq Swift (22) is congratulated by teammates MJ Robertson and Dylan Johnson after making a touchdown catch in Friday’s win over Upson-Lee. Johnson had three scoring passes in the game. Kevin Eckleberry | Daily News

http://lagrangenews.com/wp-content/uploads/sites/37/2016/09/web1_CHS30.jpgKhaliq Swift (22) is congratulated by teammates MJ Robertson and Dylan Johnson after making a touchdown catch in Friday’s win over Upson-Lee. Johnson had three scoring passes in the game. Kevin Eckleberry | Daily News

Callaway’s Braylon Sanders waits on a touchdown catch during the first half of Friday’s game. Kevin Eckleberry | Daily News

http://lagrangenews.com/wp-content/uploads/sites/37/2016/09/web1_CHS26.jpgCallaway’s Braylon Sanders waits on a touchdown catch during the first half of Friday’s game. Kevin Eckleberry | Daily News