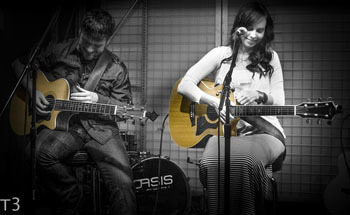 Holmes has opened for artists such as Dierks Bentley and Phil Vassar and has propelled into radio where she can be heard on Sirius XM’s Coffee House as well as 150 other national stations. While working on her dissertation to complete her PhD, Holmes discovered her heart was in music and writing and put everything to work on her first album. Six albums later she is traveling the world and living her dream.

While music has always been an important part of Holmes’ life, it wasn’t always the main focus. By the time she was 26 Holmes was only a dissertation away from completing her PhD.

“In 2009 I ended up writing an album instead of a dissertation,” she said. “Now, I use everything I learned in my graduate studies to run my own business as an independent artist and entertainer, so it was time well spent!”

Once she made the decision to pursue music full time, she felt as a songwriter, she was the one who could most passionately perform the message of her own songs.

Hart has been a session player and touring musician filling in with hundreds of bands including blues, rock, metal, country and even a two-and-a-half year stint with a big band. He taught guitar for 16 years as well as created the self-teaching series “Six Month Guitar” before he decided to perform full time with Holmes.

“It’s taken a long time to find a band that was worth pulling away from teaching for,” Hart said. “I’m excited to see where we go in the next few years.”

Hart started playing with Holmes in 2010. The duo features original and cover tunes with soulful melodies and intricate guitar riffs. Songs are appropriate for teens and up.

Holmes and Hart’s concert begins at 7:30 p.m. at Pure Life Studios, an acoustic listening room at 206 Clark St. in LaGrange. To learn more about the artist, visit www.danikaholmes.com.

Admission to the concert is a $20 cash donation at the door. To reserve a seat or for more information about the concert visit Pure Life Studios on Facebook or contact Maggie McDonald by email at maggie@purelifelagrange.com or text 706-443-4838.

Indie/pop musical artists Danika Holmes with special guest Jeb Hart will be in concert at Pure Life Studios in LaGrange on Thursday, Sept. 22.

http://lagrangenews.com/wp-content/uploads/sites/37/2016/09/web1_web0921HartHolmes.jpgIndie/pop musical artists Danika Holmes with special guest Jeb Hart will be in concert at Pure Life Studios in LaGrange on Thursday, Sept. 22.