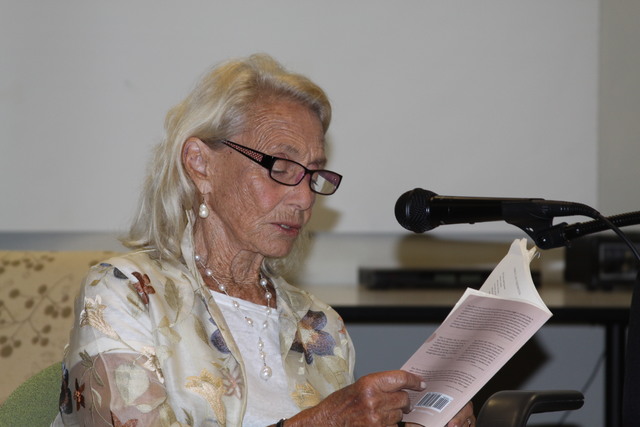 LaGRANGE — Renowned poet, activist and journalist Rose Styron read some of her poems at LaGrange Memorial Library on Monday and spoke about the poems’ meanings and her marriage to author William Styron.

The Styrons both lived and wrote in Martha’s Vineyard where they socialized with celebrities ranging from the Kennedys to Truman Capote. While her husband’s books were heavily focused on internal struggles, Rose Styron’s poetry speaks of the rhythms of her daily life and the events that define it.

“I wanted to give you a sense not only of the Vineyard, but where we lived year-round for 50 years,” said Rose Styron. “… As you sort of know, this is the elegy for a long marriage, and it’s waking up afterwards.”

William “Bill” Styron is best known for his books “Sophie’s Choice,” “Lie Down in Darkness” and “The Confessions of Nat Turner.” Rose Styron edited much of his work while working on her own poetry. Several of her poems in “Fierce Day” make note of things that remind her of her husband, who passed in November 2006.

“I really thought of it as the last line of a poem from which I awaken,” said Styron of the title of the book. “I get lonely, and my dreams are bad, and when the light comes in in the morning, then I feel so much better, and day is such an adventure. Life is such an adventure, and I feel the need to seize the day, always. You have to do that fiercely so that more light comes in. The fiercer I feel, the fiercer I hope the day will be, and it’s an adventure every day.”

“Fierce Day” came out in November, and the book recounts her thoughts on her travels in addition to remembrances of her late husband. Styron has traveled extensively both for pleasure and for her work with Amnesty International.

“I went once to Kenya and Botswana, and because I had already started with Amnesty International, which sent me all over the world to troubled spots to see what was going on with the abuses of human rights, they discovered that I was in Kenya, and they said, oh, as long as you are there. Would you mind going to South Africa and looking for a poet … who we know has been in solitary confinement for seven years, and we don’t know where he is. …”

Styron agreed to go look for the poet but was nearly arrested in an airport line to South Africa, so she went to Botswana, where many refugee camps were located at the time, to find information.

“I was in line, and two guys in front of me were taken away in handcuffs … because of their papers, so I went to the bathroom, tore everything up. (I) went to Botswana, and in the refugee camps found someone who knew where (the poet) was, and gave that information to Amnesty International.”

Styron also read from some of her earlier works that recount happier points in her marriage “From Summer to Summer” and “By the Vineyard Light” at the event.

“The only book I ever made money on … (“By the Vineyard Light”) sold because of the fabulous pictures in it that my children’s tennis teacher (Craig Dripps) took. … We would go to all his favorite places, and I would write little poems about them, and I’d take him to my favorite places, and he would do photographs of my places.”

Styron also wrote “Thieves Afternoon” and edited the “Selected Letters of William Styron.” She enjoys visiting family in Troup County and expressed the desire to come down here more often to escape the harsh winters at her home in Martha’s Vineyard.

Rose Styron reads from her latest book ‘Fierce Day’ at the LaGrange Memorial Library on Monday.

http://lagrangenews.com/wp-content/uploads/sites/37/2016/09/web1_web0921Styron-2.jpgRose Styron reads from her latest book ‘Fierce Day’ at the LaGrange Memorial Library on Monday.