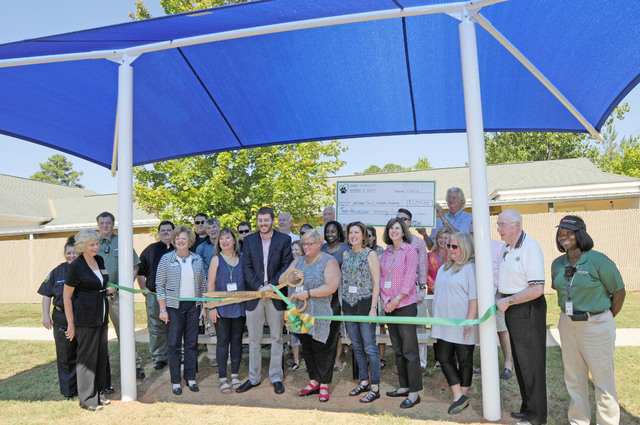 The fenced area features a canopy for shade and bench allowing visitors to sit. Volunteer Diana Martin said she had the idea after her work playing with and exercising the dogs outside, which could get very hot in the unshaded area.

“So I had this idea, wouldn’t it be nice to have some shade out here and not wait 30 years (for trees) to grow into maturity?” she told a group gathered for a ribbon cutting of the new area on Thursday.

Her initial proposal wasn’t approved by the board due to cost, she said. A few years later, she brought the idea back up after seeing a similar area and the board approached people and businesses to help make the project happen.

“We had an overwhelming response were and able to raise the money in just a few months,” Martin said. “… And here we are today. We are very excited to be here. Many people were involved in this project.”

Volunteer Lisa Boatwright also noted the generosity of donors and said many businesses donated their time and resources to create the area, including the fencing, landscaping and canopy. The city of LaGrange also allowed the Humane Society to use the city-owned land, and city employees helped with the project, she said.

“We are very blessed a lot of people were very generous to donate to this project,” Boatwright said. “It actually was a lot more expensive than we thought it was going to be … so I want to thank not just private donors, but businesses that really came through for us.”

Local Humane Society board president Carla Collins echoed the thanks for those who contributed.

“This is just a very exciting new addition for us,” she said prior to cutting the ribbon on the new canopy. “We’ve had a lot of growth this year, and I can’t say enough about the volunteers who come out and work hard for us – and HYPE coming out and doing a fundraiser for us. … I can’t say enough about all the people who have come out to help us.”

HYPE, the LaGrange-Troup County Chamber of Commerce’s young professionals group, raised money for the society at its recent Bark at the Park event. More than 100 people participated, said Trae Long, a HYPE board member who attended Thursday’s ribbon cutting.

Long presented the Humane Society with a $2,075 check for the funds raised by the group from the Bark at the Park event.

The Humane Society will host an open house for the new area on Saturday, Sept. 24, from 11 a.m. to 2 p.m. featuring Kona Ice, the LaGrange Fire Department with a fire truck and Sparky the Fire Dog, the LaGrange Police K9 Unit, the Troup County Sheriff’s Department, Hero Training demonstrations by Susan Ray, face painting and tables sponsored by Back the Blue, Pet Sense and Tractor Supply Co.

Free hamburgers, hot dogs and water will be served. Raffles with prizes will be available benefiting the LaGrange-Troup County Humane Society.