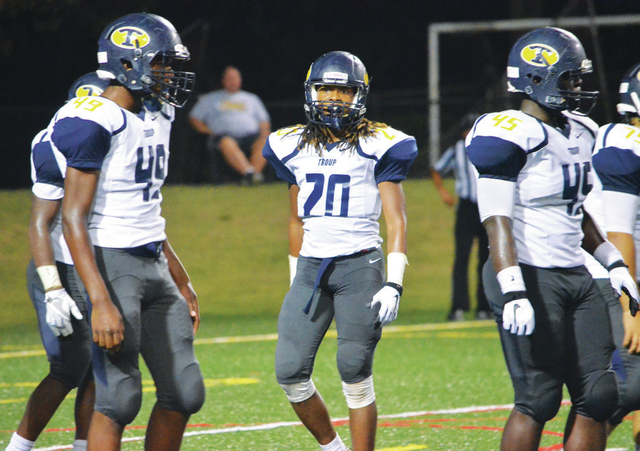 LAGRANGE – It’s been a turnaround season for the Troup Tigers, and they’ll look to keep the good times going this week.

Troup (3-1), which has won three straight games since a season-opening loss to Hardaway, will begin its Region 5-AAAA schedule with a home game against Chapel Hill on Friday.

Troup is fighting for one of the the region’s four playoff berths, and getting a win over a quality Chapel Hill squad would be a big first step toward achieving that goal.

Troup was off last week, so it will have had two weeks to prepare for Chapel Hill, which improved to 2-1-1 with a 19-16 win over a previously unbeaten Whitewater team.

“We had a great off week,” Troup head coach Tanner Glisson said. “It was the best off week I’ve had in 17 years of coaching football. It was four straight days, really physical and getting after it.”

Everything is working for the Tigers, and that’s a nice change of pace coming off a 1-9 season in 2015.

Troup began the season with a disappointing 21-14 road loss to Bowdon, but it beat Kendrick 38-12 the following week at Callaway Stadium.

Troup then put together a fourth-quarter rally to beat Bowdon 28-27, and it followed that up with a 47-28 road win over Lamar County.

The past two wins are particularly impressive considering Bowdon and Lamar County have a combined 6-2 record.

“It’s going to be challenge to see if we can maintain that, and keep growing,” Glisson said. “Because we’ve come so far. We’re further along now than I thought we’d be. I didn’t think our special teams would be quite as good. I didn’t think we’d be quite as good covering the pass as we’ve been. In the box, we’ve still got to get bigger, faster stronger and more physical. But those things I just hit on, we’ve done a good job.”

The passing game is led by junior quarterback Montez Crowe, who has been carving up opposing defenses.

Crowe, whose lone start a year ago came in the regular-season finale against Whitewater, has thrown for more than 700 yards, and he has eight touchdowns and two interceptions.

Crowe’s best game was his most recent one.

Only Cartersville’s standout quarterback, Trevor Lawrence, has more passing yards than Crowe among the region’s teams.

“That area has been really, really good,” Glisson said of the passing game. “There are probably only a handful of teams in the state that are throwing it better. So we’re extremely pleased with what he’s doing. He’s just got to keep growing, keep getting better.”

Crowe’s favorite target has been Kobe Hudson, who is having a remarkable freshman season.

Six of Hudson’s 11 catches have gone for a touchdown, and he’s averaging 34 yards a reception.

Senior running back Camren Russell has been a threat out of the backfield with five catches for 118 yards, and he’s also amassed 192 yards on 27 carries with four touchdowns.

Jackson Davis has added 157 yards on 35 carries with two touchdowns, and Crowe has scored a pair of rushing touchdowns as well.

Troup’s defense, especially considering the inexperience on that side of the ball, has been effective.

“We are going to play Friday, meaningful snaps, 10 sophomores and one freshman on defense,” Glisson said. “That is tough.”

A true bright spot for Troup has been the performance of the special-teams units, led by place kicker and punter Carson Wreyford.

“We spend 30 minutes a day on special teams,” Glisson said. “We’re going to stay out there and get our special teams in, because it bit us so bad last year.”

Glisson said everything the Tigers are accomplishing is a testament to the willingness of the players to buy into what the coaches are selling.

“They’ve done everything we’ve asked them to do,” Glisson said. “They believed in us, when nobody else did. That’s big. When kids believe in you, when people outside that room are doubting you, there’s a lot of loyalty there. Now only with them and us, but us back to them. We’ll stand up for them, because they stood up for us.”

As for this week’s opponent, Glisson said Chapel Hill is no pushover.

Chapel Hill has been stout on defense, and the offense is led by a quarterback who is a major two-way threat.

Jadon Walker has run for 410 yards in four games with five touchdowns, and he averages 10 yards per carry.

Walker has also completed half of his passes for 420 yards with four touchdowns.

Nick Ligon (20) and Troup’s inexperienced defense has been getting it done this season. Kevin Eckleberry | Daily News

http://lagrangenews.com/wp-content/uploads/sites/37/2016/09/web1_troup3-4.jpgNick Ligon (20) and Troup’s inexperienced defense has been getting it done this season. Kevin Eckleberry | Daily News

Callaway, Heard both ranked in top 10 in Class…