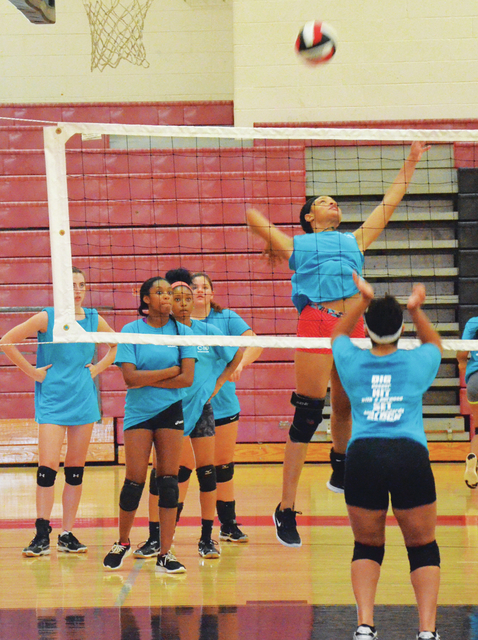 When Callaway’s volleyball team got a point on a blocked a shot, LaGrange’s lead in the first set of Thursday’s county showdown was down to two.

LaGrange won the next three points to secure the 25-20 win in the first set, though, and it dominated the second set 25-9 to get the win.

LaGrange finished the day with a hard-fought, straight-sets loss to a strong Auburn team, and Callaway was also beaten by Auburn

LaGrange’s Madison Lewis said playing teams the caliber of Auburn is good for she and her teammates.

“It really challenges us to play up to their level,” Lewis said. “We really like that.”

In the first match match, Lewis said the players did a nice job of hanging tough in the first set when things started to go Callaway’s way.

“It was really about focusing on our communication and getting our energy up, to just push through those last points,” Lewis said.

In the second set of the Callaway match, LaGrange jumped out to a 6-0 lead en route to the comfortable win.

It’s the home stretch of the regular season for the Lady Grangers, who are hoping to be at their best when the area tournament rolls around on Oct. 6.

LaGrange is hoping to be one of the four area teams that qualifies for the state tournament.

“I think we definitely feel like we can play with those teams,” Lewis said. “We just have to push those points. I think we can do it.”

Callaway has a losing record overall, but it is 5-3 in its area.

The Lady Cavaliers have played a challenging schedule, and while the outcome hasn’t always been to their liking, head coach Heather Smith said there’s always something the players can learn, win or lose.

“I tell my girls all the time, you’d like to have a W, but you always find some positives,” Smith said. “We try to focus on those.”

Smith said playing so many quality opponents has helped her team improve since the beginning of the season.

“We’ve had some things we struggled with, and I think we’ve gotten better at them,” she said. “Our serving has improved, and they’ve gotten more confident with their hitting. That’s been a good thing.”

In the first set of Thursday’s match between the county rivals, Callaway was on top 13-11 before LaGrange rallied.

LaGrange eventually built the lead to 19-14 before a winner by Cheney Eubanks brought Callaway within four points.

After Abbie Gholston’s block got the Lady Cavaliers within three, a kill by Barreras and back-to-back service winners by Caitlin Morman put the Lady Grangers on top 22-16.

A killl by Gholston, a service winner by Eubanks and a blocked shot cut LaGrange’s lead to 22-20.

The Lady Grangers closed strong, though, with back-to-back kills by Barreras and Lewis finishing off the set.

LaGrange started quickly in the second set with Lewis serving.

Morman had an early kill to get the Lady Grangers rolling, and Lewis had an ace and a service winner during a 6-0 run to open the set.

The Lady Cavaliers managed to keep it close and they were within five when the Lady Grangers went on a 9-0 run with Morman serving.

Morman had a handful of aces and service winners during that stretch, and Hannah Holcomb had a kill.

Breeanne Moncus halted the run with a winner, but by that point LaGrange had a 20-6 lead.

With LaGrange up 24-9, Lewis had a kill to finish things off.

LaGrange’s Madison Lewis puts the ball over the net during the second set of Thursday’s match against Callaway. LaGrange won 25-20 and 25-9. Kevin Eckleberry | Daily News

http://lagrangenews.com/wp-content/uploads/sites/37/2016/09/web1_volleyball2-24.jpgLaGrange’s Madison Lewis puts the ball over the net during the second set of Thursday’s match against Callaway. LaGrange won 25-20 and 25-9. Kevin Eckleberry | Daily News

Callaway’s Jasemine Drake passes the ball to one of her teammates during Thursday’s match against LaGrange. Kevin Eckleberry | Daily News

http://lagrangenews.com/wp-content/uploads/sites/37/2016/09/web1_volleyball5.jpgCallaway’s Jasemine Drake passes the ball to one of her teammates during Thursday’s match against LaGrange. Kevin Eckleberry | Daily News