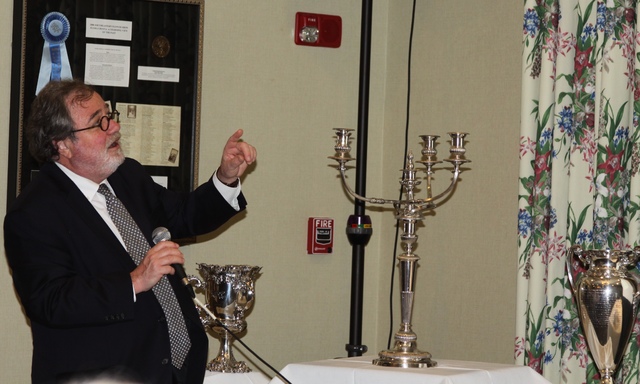 The lecture titled “Influences on American Silver in the 19th Century” took place at the Hills & Dales Estate. The lecture primarily focused on the period between 1842 and World War I when American silver grew significantly as an industry.

“The tariff of 1842 is interesting … but what had happened was an increase of more than 10 percent ad valorem on luxury goods that included iron work and glass work but also included silver,” said Brady. “And American silver was not nearly as prized as English silver at the time, so it created this new demand for American silver.”

The styles and sources of silver were affected by the law, and contributed to to American silversmiths being able to experiment with new styles according to Brady. American silver’s popularity was further enhanced by its availability thanks to the Comstock Lode silver discovery in 1857 as well as an influx of new inspiration for designs from Japan.

“In 1857 Japan opens up for trade with the West, and all of a sudden Japanese designs permeate the decorative arts including silver,” said Brady. “You see some naturalistic motifs also being in the United States. … At this point when Gorham and Tiffany were the biggest, the two most innovative companies in the country, and they were going head to head for not only hiring the best designers but stealing each other’s designers.”

By the end of the century, English silversmiths were copying American styles, including innovations by Gorham and Tiffany like combining metals. Brady constantly referenced different historic events as he spoke about silver in the U.S. from Napoleon’s rise to power influencing designers to use French style designs to the factories of the industrial revolution making silver manufacturing possible.

“I think silver is very special because it represents history, American history,” said Nardi Hobler, who is currently interning under Brady. “It represents the lives of people in all classes.”

Brady took a few moments to explain some of the features on a few pieces of silver from Hills & Dales’ collection. He noted their styles, uses and designers while explaining why they were made the way they were.

“I don’t think I’ll ever look at silver again quite the same way,” said Carleton Wood, the executive director of Hills & Dales. “(Now I) realize that silver can have such a diverse history with so many stories to be had.”

Hills & Dales Estate will host a lecture featuring the book “Memories at the Mansion” with a reception and book signing in honor of the estate’s 100th anniversary celebration on Oct. 4 at 6:30 p.m. For more information call Hills & Dales at 706-882-3242.

Silver expert Joseph Brady at a lecture at Hills & Dales Estate on Thursday night explains the features of a candle holder that featured a finial that could cover the spot for a fourth candle if the owner only wanted to burn three ‘for less important guests.’

http://lagrangenews.com/wp-content/uploads/sites/37/2016/09/web1_web0926SilverLecture.jpgSilver expert Joseph Brady at a lecture at Hills & Dales Estate on Thursday night explains the features of a candle holder that featured a finial that could cover the spot for a fourth candle if the owner only wanted to burn three ‘for less important guests.’