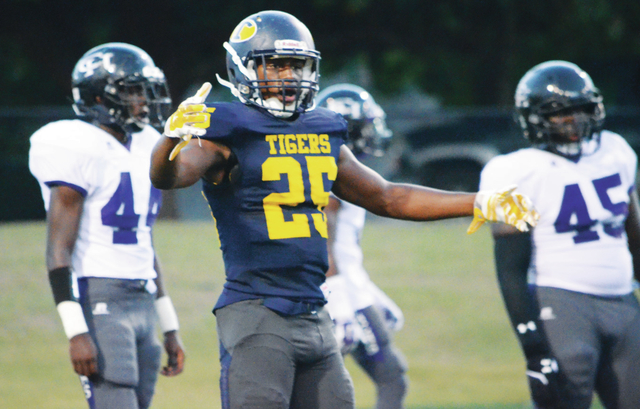 LAGRANGE – He got a block on the outside, saw the end zone, and he wasn’t going to be denied.

With less than three minutes remaining in Friday’s game at Callaway Stadium, the Troup Tigers had the ball leading the Chapel Hill Panthers by 14 points.

Running back Jackson Davis was about to put the exclamation point on a big region win for Troup.

On a second-down play, Davis took a handoff from quarterback Montez Crowe, and he bounced outside and got a nice block from senior wide receiver Chanse Hill.

Davis did the rest, taking it in from 36 yards out to cap the scoring as Troup (4-1) rolled to a 42-21 victory in the Region 5-AAAA opener for both teams.

Moments before Davis’ touchdown, Troup’s defense had made a critical stop on fourth down.

After a short gain by Camren Russell, Davis scored to end whatever hope the Panthers had of pulling off the road win.

“I ain’t going to be stopped,” Davis said. “When I saw Chanse turn on the block, I had to cut behind him, and get in the end zone.”

The Tigers got it done on offense with four rushing touchdowns, including two by quarterback Montez Crowe and one each by Russell and Davis.

Troup’s defense also delivered an inspired effort against a high-powered Chapel Hill attack, and linebacker Kevin Martin scored a touchdown when he stripped the ball from quarterback Jadon Walker.

Troup also got a special-teams touchdown, with Macenta Stafford blocking a punt and returning it for a touchdown to open the scoring in the first quarter.

“We didn’t play quite as well as we wanted to offensively,” Troup head coach Tanner Glisson said. “I thought defensively we played fairly well. We bent, but didn’t break, and that was the game plan. We didn’t want to give up the big plays.”

Troup’s defense, as has been the case repeatedly this season, was at its best late.

Walker began the fourth quarter by throwing a 66-yard touchdown pass to Datren Bay, and Troup’s lead was 35-21.

Chapel Hill’s next three possessions all ended with a failed fourth-down play.

On the first of those three possessions, Troup sophomore King Mwikuta put pressure on Walker and forced an incomplete pass on fourth down.

Earlier on that drive, Mwikuta and fellow sophomore Joko Willis both had sacks, and Mwikuta also had a sack on Chapel Hills first possession of the second half.

With 3:52 remaining, Chapel Hill got the ball once again, still down by 14 points.

Chapel Hill got a first down on that drive, but once again Troup’s defense was up to the challenge.

On second down, Willis got into the backfield and sacked Walker, putting Chapel Hill in a third-and-long situation.

On third down, Willis stepped up again and knocked down a pass attempt from Walker.

An incomplete pass on fourth down gave the ball back to the Tigers.

Martin’s touchdown run ended the suspense, and Chapel Hill had another failed fourth-down play on its final possession.

Willis said the defensive game plan was to “just keep focused, and stop the quarterback from moving out of the pocket.”

On the final play of the third quarter, it was Martin making his presence known.

Walker dropped back to pass, and Martin got to him and tried to bring him down.

Walker managed to stay upright, and that ended up working against him.

Martin ripped the ball away from Walker at the 1-yard line, and he stepped into the end zone for the touchdown, giving Troup a 35-14 lead with eight seconds left in the third quarter.

“I was just trying to get him down,” Martin said. “He wouldn’t go down, so I just stripped him.”

For the first time this season, the Tigers didn’t have any passing touchdowns, but they still put the ball in the end zone four times on offense.

Troup’s first touchdown came early in the first quarter on a special-teams play.

Chapel Hill was on its own 43-yard line when Stafford came sprinting into the backfield and blocked a punt, and he scooped the ball up and trotted untouched into the end zone.

Carson Wreyford made the first of his six extra points, and Troup led 7-0.

Chapel Hill came right back and got a 74-yard touchdown run by Walker, and it was tied 7-7 with 6:35 left in the first quarter.

Troup’s special-teams play, which has been so solid throughout the season, produced another big play, with Chanse Hill returning the ensuing kickoff to midfield.

Hill then had a 15-yard pass from Crowe during a 10-play touchdown drive.

Crowe also had completions of 16 and seven yards to Ken Truitt on that drive, and Russell had a 9-yard run to the 1-yard line.

Troup’s next touchdown drive, which began on its own 46-yard line, featured a clutch play by one of the offensive linemen.

On third down, the Tigers lost a fumble, and an alert Ethan Short picked the ball and ran five yards for the first down.

Russell followed with a 32-yard run, and two plays later, Crowe’s 1-yard run and the extra point gave Troup a 21-7 lead, and that was the score at the half.

Although Troup’s final possession of the first half didn’t yield any points, Davis did provide a highlight when he had a 19-yard run where he carried a host of defenders with him for about 10 yards.

Chapel Hill had the ball first at the start of the second half, but Mwikuta’s third-down sack forced a punt.

The Tigers took over at their own 48, and four plays later, they were in the end zone.

Crowe had a 21-yard run on first down, and a Chapel Hill penalty put the ball on the 11-yard line.

Davis nearly scored on the next play, and he had a 10-yard run while dragging some Chapel Hill defenders with him.

He was stopped at the 1-yard line, and Crowe scored on the next play, and Troup led 28-7 with 8:46 remaining in the third quarter.

Chapel Hill took a bite out of its deficit when Walker threw an 11-yard touchdown pass to Kevin Burton, and Troup led 28-14 with 2:24 to play in the third quarter.

On Troup’s next possession, it looked like freshman Kobe Hudson had made an incredible leaping catch on the sideline for a first down, but he was ruled out of bounds.

Troup punted, and Martin then stripped the ball from Walker and scored, and Troup’s lead was 21 points.

Walker shook that off and tossed the 66-yard touchdown pass to Bray, and with nearly 12 minutes to play, Chapel Hill was only down by 14 points.

Troup’s defense took over from there, though, and made sure the night would belong to the home team.

Troup will visit a strong Sandy Creek team on Friday as it looks to move to 2-0 in the region.

Troup’s Jackson Davis (3) is congratulated by his teammates after scoring a touchdown late in Friday’s win over Chapel Hill. Kevin Eckleberry | Daily News

http://lagrangenews.com/wp-content/uploads/sites/37/2016/09/web1_tropu1.jpgTroup’s Jackson Davis (3) is congratulated by his teammates after scoring a touchdown late in Friday’s win over Chapel Hill. Kevin Eckleberry | Daily News

Troup’s Macenta Stafford (6) and Kevin Martin (11) each scored touchdowns during Friday’s game. Stafford blocked a punt and scored, and Martin stripped the ball from the quarterback and scored a touchdown. Kevin Eckleberry | Daily News

http://lagrangenews.com/wp-content/uploads/sites/37/2016/09/web1_troup2-4.jpgTroup’s Macenta Stafford (6) and Kevin Martin (11) each scored touchdowns during Friday’s game. Stafford blocked a punt and scored, and Martin stripped the ball from the quarterback and scored a touchdown. Kevin Eckleberry | Daily News