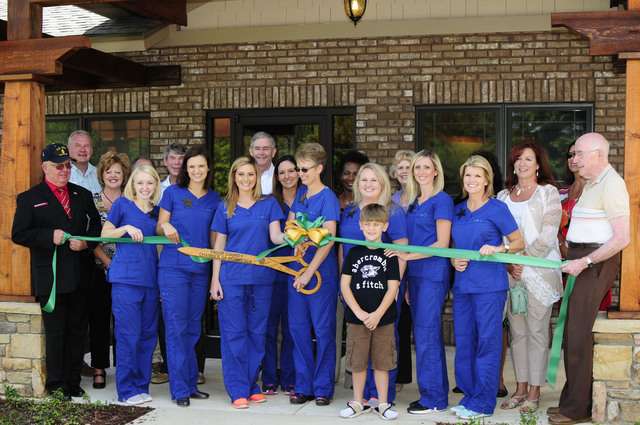 LaGRANGE — Walking into Children’s Dentistry of West Georgia might make you think you were just transported to the old west.

From bull horns on the wall, wood furnishing and trim, a round bench with a wooden barrel in the middle and rocking horses, it’s plenty of eye candy for young patients. The new office at 202 Calumet Center Road was designed with the Western feel as a callback to Dr. Angela Patterson’s early practicing years in Arizona.

“Right out of dental school I went and worked with the Indian Dental Service, so I was in Flagstaff, Arizona, working in Winslow, and so I love it out west,” Patterson said. “And since I’m on the western side of the state (of Georgia), I decided to go with the Western theme.”

“We call her the sugar-bug sheriff and we’re all the decay deputies,” added Tiffany Lowery, office manager.

The employees all wear sheriff’s badges to tie into the theme.

“We’re just trying to make it fun,” Patterson said. “To me, that is the biggest thing about going to a pediatric dentist as opposed to a general dentist.”

She said the group wants to “specialize at Disney at the dentist.”

The new office on Calumet Center Road features twice the space as Patterson’s previous location. Among new amenities are TVs wired into the ceiling so children can watch cartoons while having their mouth examined.

Patterson and her crew hope the child-friendly atmosphere makes children want to come to the dentist. Making the experience more fun and encouraging them to return allows the staff more opportunities to keep their patients healthy.

“We want to educate kids to keep the sugar low in their diet, because we wouldn’t need half the dentists if we could control the sugar in people’s diets, and that is one of the biggest, hardest things we hit on here,” Patterson said. “And just loving on the kids, just making them want to come to the dentist, and then if they do have a problem, fix it while it’s small so they don’t have to go through anything too excruciating.”