Callaway moves to 5-0 with win at Harris County 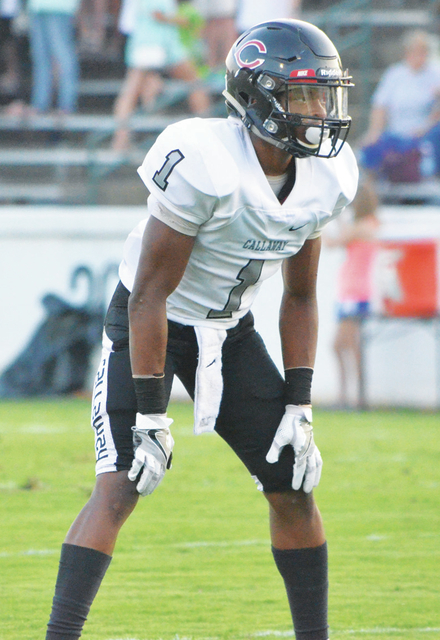 HAMILTON – It was still a ballgame.

In the closing moments of the second half of Friday’s game at Harris County, Callaway had the ball near midfield clinging to a 14-7 lead.

Callaway’s Braylon Sanders moved to quarterback, and he heaved the ball downfield, and Courtney Williams came up with the catch.

That 41-yard touchdown pass that came as time expired, combined with the extra point by Noah Stephens, gave Callaway a 21-7 lead at the halftime break.

Callaway proceeded to dominate the second half as it rolled to a 48-21 victory.

The Cavaliers improved to 5-0 at the halfway point of the regular season, and they’ll take a week off before opening their Region 5-AA schedule at Lamar County.

The play right before the half was probably the biggest one of the game.

While Sanders has been a wide receiver this season, he’s not unfamiliar with throwing the ball since he was the quarterback in 2015 before he was injured.

That play gave the Cavaliers all the momentum heading to the break, and they went on to lead by as many as 28 points in the second half.

The man who was at quarterback for most of the game on Friday, Dylan Johnson, was superb.

DJ Atkins, who is having a remarkable junior season, ran the ball 29 times for 201 yards, and he scored three touchdowns.

Tely Fanning also had an effective game on the ground and scored a touchdown, and freshman Cartavious Bigsby capped the scoring with a touchdown run late in the fourth quarter.

Callaway’s defense got it done as well.

Harris County quarterback Jordan Griffin was limited to 4-of-14 passing for 98 yards, and 68 of those yards came on one play.

Johnson connected with Sanders for a completion to the 13-yard line, and Atkins scored on the next play, and Stephens made the extra point to give Callaway a 7-0 lead with 1:39 left in the first quarter.

Moments into the second quarter, Harris County pulled even on a 68-yard touchdown pass from Griffin to Cal’von Harris.

Back came the Cavaliers.

Johnson completed passes to Sanders and DQ Wilkerson to put the ball inside the 10-yard line, and Atkins had a 7-yard carry to the 1-yard line.

On the next play, fullback Jibrell Jackson bulled his way into the end zone from one yard out, and Stephens nailed the extra point to put Callaway on top 14-7 with 8:14 remaining.

Then on the final play of the first half, Sanders rolled to his right and found Williams for the touchdown, and Stephens made his third extra point of the half to extend the lead to 21-7.

Callaway kept it going in the third quarter.

Atkins had a 2-yard touchdown run with 9:31 left in the third quarter to give Callaway a 28-7 lead.

Callaway’s defense then made a fourth-down stop, and the offensive took over near midfield.

Atkins ripped off a 50-yard run and was brought down just short of the end zone, and Fanning scored from one yard out on the next play to push the lead to 35-7 with 3;57 to play in the third quarter.

After a long kickoff return, Harris County got a 17-yard scoring run from Griffin, and Callaway’s lead was down to 35-14 with 2:59 left in the third quarter.

Calalway came right back with another touchdown, with Atkins scoring on a 2-yard run, and with 11:32 to play the lead was 42-14.

Harris County’s final touchdown came on a 4-yard run by Tank Adams with 8:29 to play, and Bigsby’s 5-yard run with 3:03 completed the scoring.