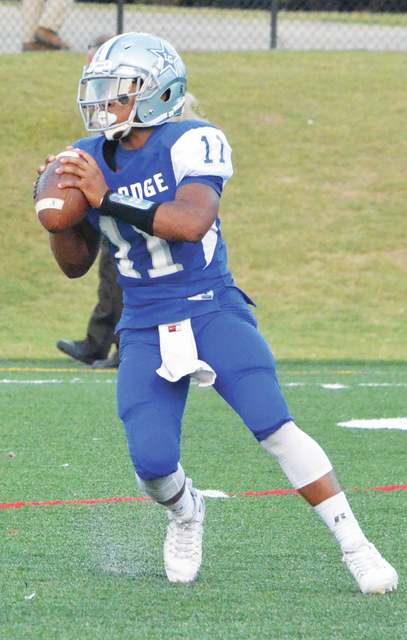 CARROLLTON – Sophomore quarterback Jakoby Smith made his first start of the season Friday night, and he helped lead the LaGrange Grangers (2-3 overall) to a critical 30-12 win over Central-Carroll in the Region 5-AAAA opener for both teams.

Smith threw a pair of long touchdown passes to fellow sophomore Jamari Thrash, Amad Ogletree and Cornell Kendrick each had a scoring run, and Austin Stamper made a field goal.

The versatile Ogletree, who has been a quarterback, running back and wide receiver during his time with the Grangers, provided a lift in the running game with 147 yards with the touchdown.

Thrash, meanwhile, has been making big plays all season, whether he’s been catching balls from Ogletree, Nathan Cronic or Smith.

Thrash came into the game averaging four catches and 65 yards per game, and he now has three touchdowns.

Thrash also had a scoring catch from Ogletree in a 28-7 win over Villa Rica.

In Friday’s game, Thrash grabbed a 14-yard touchdown catch from Smith to give the Grangers the early lead.

Later in the first quarter, Ogletree scored on a 14-yard run, and LaGrange led 13-0.

That was Ogletree’s second touchdown run of the season.

The Grangers padded their lead in the second quarter, with Smith connecting with Trash for a 37-yard touchdown, and the lead was 20-0.

While LaGrange’s offense was crisp in the first half, the defense shut down Central’s offense, which was limited to barely 60 yards in the first two quarters.

The Lions did find some offensive success in the second half, but the deficit was too great.

Central got a 5-yard touchdown run from Malcolm Brown in the third quarter, and quarterback Xavier Vaughn had a 14-yard scoring run in the fourth quarter.

The outcome was still somewhat in doubt in the fourth quarter when the Grangers put it away.

With 3:11 to play, Kendrick took a handoff and scored on a 37-yard run, and Stamper made the extra point to cap the scoring.

LaGrange will look to keep it going on Friday when it hosts Cedartown in another region game.

LaGrange’s Amad Ogletree ran for more than 100 yards and had a touchdown during Friday’s road win over Central-Carroll. Kevin Eckleberry | Daily News

http://lagrangenews.com/wp-content/uploads/sites/37/2016/09/web1_LHS-ogletree.jpgLaGrange’s Amad Ogletree ran for more than 100 yards and had a touchdown during Friday’s road win over Central-Carroll. Kevin Eckleberry | Daily News