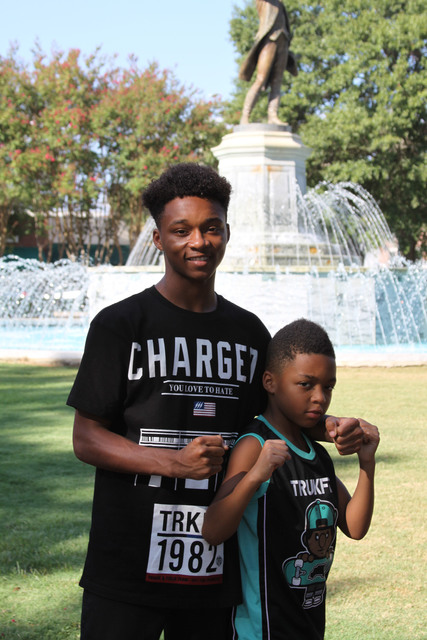 LaGRANGE — Local boys hope that their tournament success will bring them closer to their professional dreams.

A’Killias and Vito Evans were recognized for their boxing success at the September’s Board of Education meeting. The pair’s tournament success over the summer led to both being nationally ranked.

Vito Evans, 16, a junior at LaGrange High School, is currently ranked fifth in the country and 13th among Elitesman, the adult division of boxing. He hopes to become a pro boxer and go to the 2020 Olympics in Tokyo.

He attributes his success to his training with coach Randy Hardaway at Back2Basics Boxing in LaGrange. Vito explained some of the workout routine that he and the other boxers go through at the gym.

“First we run,” he said. “We do a lot of running around LaGrange. Then we hit on a bag and do mix and spar. And then after that, we usually wrap it up by stretching and stuff like that.”

A’Killias “Duke” Evans, 9, a fourth grader at Whitesville Road Elementary School, dreams of becoming a pro boxer and a scientist. He is currently ranked eighth in the world for his boxing abilities. He explained that he and his brother’s training helps improve their ring I.Q., or their ability to make the best use of their physical talents and natural gifts while boxing.

“It’s the specific exercises we do,” he said. “Like we have to do cardio, so that we can like go punch, and we won’t get tired.”

His brother emphasized that it wasn’t all physical though.

“Boxing is – you gotta think in it,” said Vito Evans. “We do a lot of thinking. It is all about your ring I.Q. How smart you are. You’ve got to be very smart.”

The effects of the sport have carried over into other parts of their lives too, according to their mother, Christina Evans.

“Boxing has been a great impact to them, and boxing has been good for me as well as being a single parent,” she said. “It gives them discipline, structure, all of that by them being around a lot of other positive males that they have in their life that they have come in contact with in boxing. So boxing’s been all around good.”

Christina Evans actively supports her sons’ athletic aspirations and makes a point of being at the gym with the boys everyday. She also tries to go to as many of the boys’ sporting events as possible, but Christina and Vito Evans both emphasized that what the boxers need most is community support.

“We go a lot of different places, and we really need more support in our community to help us reach our goals to turning pro, going to Olympics, things like that,” said Vito Evans.

The boxers from Back2Basics Boxing travel all over the country for tournaments, which the Evans family pointed out could get expensive.

“You have to travel a lot because this is the only boxing gym in LaGrange, so we’ve got to travel to Atlanta, Alabama, Columbus, North Carolina – well both Carolinas, you know – so it gives them the opportunity to explore instead of being stuck in one spot, and they don’t get to see anything,” said Christina Evans “They get to meet a lot of people, a lot of celebrities and all kinds of things through boxing.”

Despite the positive effects that the sport has had on the lives of the Evans brothers and other boxers at Back2Basics, Christina Evans has encountered many people who worry that fighting is bad for children. She stressed the gym teaches its students to only use the abilities that they learn in tournaments and in self defense, just like students would for karate or taekwondo.

“They register through USA Boxing,” said Christina Evans. “Therefore, once their hands get registered, they can’t go out and want to fight somebody. … The only way they can fight is defense. … We don’t allow them to take their sports to the street. If one of them does, they get kicked out of the gym. They’re going to be disciplined for that. We’ve never had that situation before, so out of all these years that we’ve been doing it and that we’ve been in that gym, we never came across a child that took their sport to the streets.”