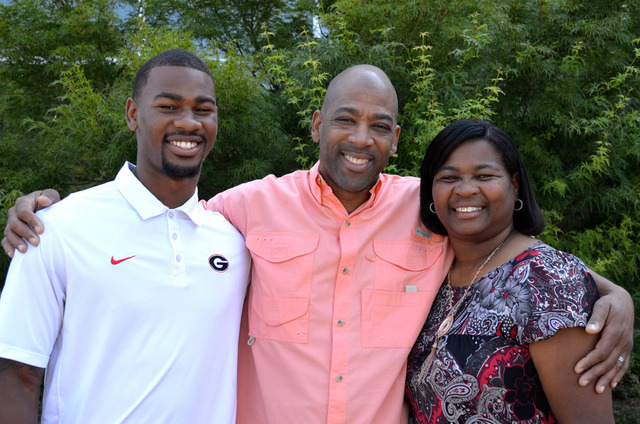 SEC coaches were heavily recruiting their son, Terry Godwin Jr., a five-star wide receiver prospect at Callaway High School in Hogansville, to play football at the University of Georgia, Auburn University and the University of Alabama. As early as his eighth-grade year, the Godwins found themselves at their kitchen table discussing “Lil’ T’s” future with Coach Kirby Smart. Also a baseball a standout, Atlanta Braves coaches wanted Terry Jr. as well.

By January 2, 2015, they were watching their son play in the high-school Under Armour All-America Football Game at the Citrus Bowl in Orlando, Fla., and preparing for Signing Day in early February.

They returned from Orlando on Saturday, Jan. 3, a date Olivia Godwin can recall vividly, just as she can recall just about every date each opponent played the University of Georgia during the 2015-16 season.

Just two days after their return from Orlando, Terry Sr. was at work at Interface in LaGrange when he began feeling light-headed and dizzy. He called his wife, and co-workers drove him to the emergency department at WellStar West Georgia Medical Center.

“They took my blood pressure, did an EKG and took a blood sample,” Terry Jr. said. “I didn’t realize it, but they said I was extremely pale, I’d lost a lot of blood, and I’d also being losing weight. I had a blood transfusion in the emergency room, and they ended up admitting me into the ICU, where I had two more transfusions.”

An MRI revealed “Big T” had a tumor in his colon. Hoping it was benign, doctors removed it only to find malignant cells. A colonoscopy by Dr. Robert Coggins revealed he needed additional emergency surgery, and Dr. Vincent Scoglietti removed a portion of his colon.

With Terry Jr. in the spotlight, only a handful of family and friends knew “Big T” had been diagnosed with Stage 3 colon cancer. When word got out among SEC recruiters, Olivia Godwin said they were respectful of the family’s privacy but were eager to show their recruiting love.

“Callaway’s wide receiver coach, Kareem Douhne, is married to Amanda Douhne, who is the pharmacist in ambulatory infusion,” Olivia Godwin said. “We had thought about going to Atlanta for Terry’s chemo treatments, but Amanda told us: ‘You need to go to Dr. Mchayleh. He’s the best.’”

While Dr. Mchayleh, Amanda Douhne and the cancer care team cared for Terry Sr., Coach Douhne and his family helped encourage Terry Jr. on and off the field, Terry Jr. said.

“The Douhnes supported me a lot when I was a senior, and then went I went to Athens in the fall, Mrs. Douhne would send me a Bible scripture before every game, and she would make me goodie baskets,” Terry Jr. said. “Their son, Brody, is like my little brother.”

He said just before the Georgia-Kentucky game last year, the Douhnes gave him a goodie bag he particularly remembers because Brody slipped a note in that said, “This is the game where you’re going to make a touchdown.”

Terry Jr. didn’t have a chance to open the goody bag until after the Kentucky game – the one where he made his first career touchdown, the first one Georgia had in weeks.

Terry and his sisters – Keyatta, 24; Terryuana, 23; and Tyterria, 13 – would take turns along with their mom accompanying Terry Sr. to his three-to-four-hour chemo treatments.

“When I would go, the nurses would even give me snacks,” Terry Jr. said. “They treated me as good as they treated each patient.”

Terry Sr. said he wouldn’t have changed anything about the care he received.

“There are so many instances where you could tell they truly cared for my well-being; they weren’t just doing their job,” he said. “I remember one of the nurses after my surgery just being so encouraging and motivating me to get up, to walk, and be sure to eat.”

The family is grateful Terry Sr. completed his chemo treatments in August 2015, less than a month before Terry Jr.’s first game as a Dawg on Sept. 5. He only had to miss one game and could sometimes be seen at UGA watching fall camp practice.

He saw his son, just a freshman, have a rock-solid year as he caught 31 passes for 345 yards, and surprise the Bulldog Nation with a touchdown against Kentucky while also rushing six times for 40 yards and a score. He celebrated when his son earned MVP honors when Georgia beat Penn State in the TaxSlayer bowl at the beginning of this year.

And while Terry Sr. and his family were watching proudly from the stands, Terry Jr. said much of his success down on the field was motivated by what his family had experienced as they faced his father’s cancer together.

“Both my parents have always been 100 percent behind me, and last year, he was truly my motivator in everything I did,” Terry Jr. said. “I didn’t want my coaches to go easy on me because of what I was going through. I wanted them to push me harder because I was seeing my dad be such a fighter, and I was determined to be that, too.”

Terry Godwin Sr., center, was being treated for colon cancer at WellStar West Georgia Medical Center in January 2015 as his son, Terry Godwin Jr., was being recruited to play for the Georgia Bulldogs. He finished treatment just as Terry Jr. began his freshman year as a wide receiver in September 2015. Terry Sr. and his wife, Olivia, plan to be at every Georgia game this year.

http://lagrangenews.com/wp-content/uploads/sites/37/2016/09/web1_web0928TerryGodwin.jpgTerry Godwin Sr., center, was being treated for colon cancer at WellStar West Georgia Medical Center in January 2015 as his son, Terry Godwin Jr., was being recruited to play for the Georgia Bulldogs. He finished treatment just as Terry Jr. began his freshman year as a wide receiver in September 2015. Terry Sr. and his wife, Olivia, plan to be at every Georgia game this year.