The Thread coming together 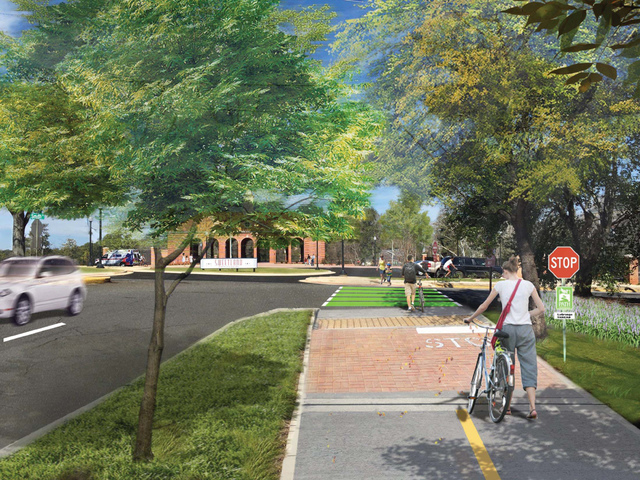 LaGRANGE — Soon it may become easier to exercise in LaGrange after officials approved a plan for The Thread trail.

The City Council approved the Trail System Master Plan and Implementation Strategy on Tuesday that will allow the city to move forward on The Thread trail. The approval will set the standards to be applied to the full length of the trail.

“The reason that it is important to adopt this – first of all you want the continuity,” said Ed McBrayer, who helped develop the plan. “You want the design standards and the logo and everything to be something that carries forward on everything that gets built in the future. … (With this adoption) the design standards have to be filled, and the logo has to be on the signs and the benches and the trash cans and everything. They’ll all look the same from now on, so the trail keeps its identity.

“Probably more importantly, … the plan is of record that comes through the confidence and development plan for the city, and any time a development comes before the planning department … (they can tell developers to) make room for (The Thread) and line a green space so that the trail can come along or maybe (they) could even build that little section for us.

“That’s what we have found even with (the Georgia Department of Transportation). If we have a plan showing a development, and they get ready to replace a bridge, we’ve had probably three or four different trail sections that were built by GDOT because the plan shows – your city plan shows – a trail right there, and they come back and replace that they put a trail on bridges or under bridges when they are building their projects.”

The plan approval does not include funding. The council will discuss how to fund the trail at a later date, though some sections have already received funding.

At a previous meeting, the council approved funding for the Granger Park section of the trail, and the second section of the trail on Ragland Street is also already moving forward using special-purpose, local-option sales tax – SPLOST – funds from 2011 set aside for parks and sidewalks. The city also received a grant from the Georgia Department of Natural Resources for the trail.

LaGrange Mayor Jim Thornton hopes local corporations will adopt miles of the trail and help fund the project. The Great Wolf Lodge and LaGrange College have both expressed interest in building parts of the trail.

The City Council hopes to implement the first two sections of The Thread in 2017. SPLOST funding for the trail may be brought to a vote in the future to help fund more sections of the trail.

A map shows the route of the proposed The Thread trail.

http://lagrangenews.com/wp-content/uploads/sites/37/2016/09/web1_ThreadMapCMYK.jpgA map shows the route of the proposed The Thread trail.

A rendering shows what the proposed bike and walking trail called The Thread might look like running north on Church Street toward Sweetland Amphitheatre. LaGrange City Council on Tuesday adopted an official plan for the trail.

http://lagrangenews.com/wp-content/uploads/sites/37/2016/09/web1_ThreadChurchStWEB.jpgA rendering shows what the proposed bike and walking trail called The Thread might look like running north on Church Street toward Sweetland Amphitheatre. LaGrange City Council on Tuesday adopted an official plan for the trail.