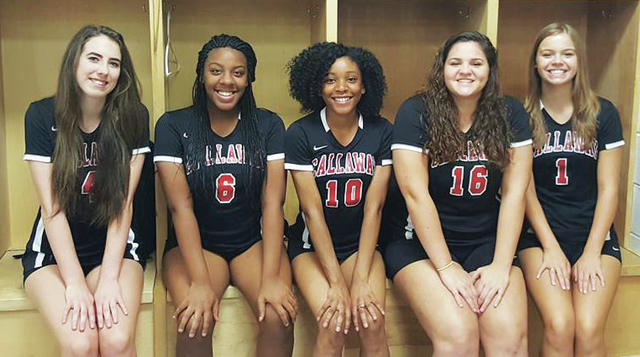 HOGANSVILLE – When Heather Smith started coaching volleyball at Callaway High in the fall of 2012, there were a group of eighth graders who arrived in the program at the same time.

Now, five years later, Smith is getting ready to say good-bye to those players.

Those eighth-graders from five years ago who were a part of the junior-varsity program are now seniors, and they were each honored during a ceremony on Tuesday before a home match.

It was an emotional moment for Smith, who has spent so much time with those seniors, Bailie Bowles, Breeanne Moncus, Jasemine Drake, Chantron Robinson and Alexis Garner.

“Three of them, I’ve been with for five years,” Smith said. “They were my first team that I ever coached. It was a sentimental day to say the least. I’ve seen all of them grow so much.”

Smith said she’s eager to see what her soon-to-be former players do with their lives, and she’s expecting big things.

“They’re active students, members of society,” Smith said. “Some coaches, you always wonder what they’ll be. I have no doubt that all of my kids will be successful in whatever they do next.”

Callaway played a pair of area matches on Tuesday, first against Early County, and then against Temple.

Callaway is 8-4 in Area 5-AA, and it will be the number three seed for the area tournament that will be held on Oct. 8.

Callaway needs to finish fourth or higher in the area tournament to qualify for state.

“This is my fifth year coaching, and we haven’t been to state,” Smith said. “That’s the goal. We are super excited for that.”

Temple, which is tied for first place in the area with Jordan, swept the season series from Callaway, but things were more competitive the second time around.

On Tuesday, Callaway hung tough in the second set and made Temple work for it.

Callaway won both of its matches against Early County this season.

Callaway plays at Valley on Thursday, and it wraps up the regular season with a match at Newnan on Tuesday.

Then it’ll be time for the area tournament as Callaway looks to secure a state bid.

“It would be great to experience that,” Smith said. “We are so excited.”

Callaway’s players get in position before the serve during a match against Temple on Tuesday at home. Kevin Eckleberry | Daily News

http://lagrangenews.com/wp-content/uploads/sites/37/2016/09/web1_volleyball1-3.jpgCallaway’s players get in position before the serve during a match against Temple on Tuesday at home. Kevin Eckleberry | Daily News