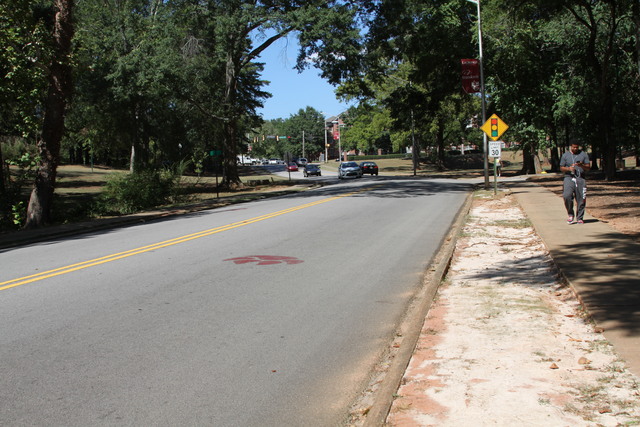 LaGRANGE — With the Panther Palooza homecoming celebration swiftly approaching, the city maybe giving LaGrange College yet another reason to celebrate.

City Council on Tuesday considered changing the name of the section of Forrest Avenue from Broad to Dallis streets to Panther Way in honor of the school’s mascot. Council members seemed open to the change to support LaGrange’s growing private college.

“The college has made a conscious effort to come to the street, and to connect its hilltop campus with the south campus,” said Dan McAlexander, president of LaGrange College. “We did that, and we did the science building down off the hill. … We also acquired West Side school and that development, and we had the grand opening for that last February.

“… Our south campus is increasingly not just something detached, but something very much so attached to the campus. And so we have a request now that we are in charge of basically the property on both sides of the street all the way from Broad Street, all the way to Dallis Street.”

The section of road runs past the college’s dorms, West Side building, sports fields, Price Theater, and entrance to Callaway Auditorium and the Natatorium. There are no homes on the portion of the street proposed to be renamed.

“You really get a sense – with the science building on one side and the hill on the other and the bridge when you are coming down Vernon, as we know is one of the most traveled streets in LaGrange – that you are driving through the college campus,” said Mayor Jim Thornton, at Tuesday’s council meeting. “I mean, it really does have a great feel to it, and I think that renaming those two blocks, basically, of Forrest (to) Panther Way will really also remind folks that there is a whole other campus down there south of Vernon.”

LaGrange College owns the majority of the property along the section of road, with exception of some pieces of land owned by the Callaway Foundation, which city officials is supportive of the change. The road is already marked with the school mascot’s painted footprints, visually tying it to the rest of the campus. The road does have a precedence of carrying a name connected with the college.

“It was named at one point, just from Broad to Vernon, Oreon, after Mary Oreon Mann Smith,” said Alexander. “She was the wife of a long-serving president of LaGrange College (Rufus Wright Smith) and actually served as a principal at the academy for the younger students. … It was named Oreon all the way up until that street was extended down to the railroad tracks. It was only when the street then went onto Dallis that it adopted the name of Forrest Avenue.”

Smith taught math and sciences for roughly 50 years prior to her death. Following her death in 1911, the college named Oreon Mary Mann Smith Hall after her at the request of her husband, whom the college had initially considered naming the building after, according to the Chattahoochee Heritage Project.

Council is expected to vote on the proposed changing of Forrest Avenue to Panther Way at the Oct. 11 council meeting, set for 5:30 p.m. in the Council Chambers at 208 Ridley Ave. If the change passes, the city hopes to be able to make an official announcement at LaGrange College’s annual homecoming celebration, Panther Palooza, which is planned for Oct. 21 to 23 with a concert featuring the band Tonic at Sweetland Amphitheatre on Oct. 21.

A student walks down Forrest Avenue on Wednesday near the West Side building. LaGrange College has asked the city to rename the section of road through its southern campus from Broad to Dallis streets to Panther Way.

http://lagrangenews.com/wp-content/uploads/sites/37/2016/09/web1_web0929PantherParkway.jpgA student walks down Forrest Avenue on Wednesday near the West Side building. LaGrange College has asked the city to rename the section of road through its southern campus from Broad to Dallis streets to Panther Way.