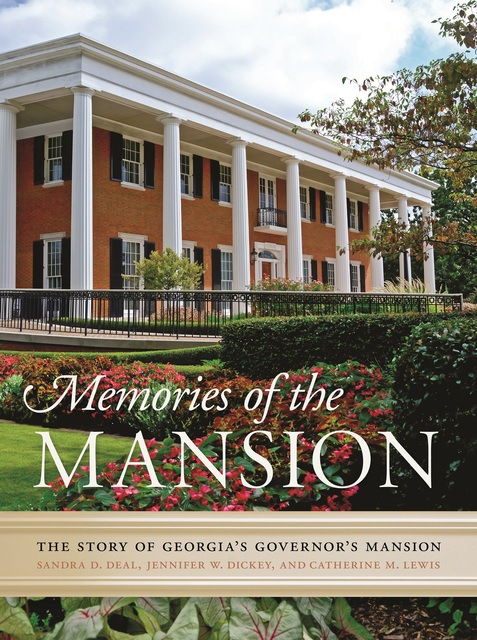 LaGRANGE — On Tuesday evening, Oct. 4, Sandra Deal, wife of Gov. Nathan Deal, will visit Hills & Dales Estate to talk about her recent book that tells the history of the Georgia Governor’s Mansion.

The book, “Memories of the Mansion,” was co-authored by Deal with Jennifer Dickey and Catherine Lewis, both of Kennesaw State University.

“All homes have a story to tell, and the Governor’s Mansion is no exception,” Deal said in a written statement.

Lewis said Deal is responsible for the idea of a book about the mansion. As she explains in the book’s preface, the grounds, architecture and artifacts in the mansion spurred so many questions about the historic property and its history she wanted to write a book and asked Lewis and Dickey to join her as co-authors. The book was published in 2015 by the University of Georgia Press and has been well received.

When they started writing “Memories of the Mansion,” they were surprised that no one had captured this history before. All of the first families were very generous with their time, they said, and they interviewed more than 100 people who had a connection to the mansion.

The co-authors also worked with numerous archival collections, including the Atlanta History Center, UGA Special Collections and the Georgia Archives. Now, with the book complete an important step in preserving a significant part of our state’s history has been taken.

The book features 12 chapters covering the complete history of the Governor’s Mansion with more detailed sections that start in 1968 with Lester and Virginia Maddox and continues to Gov. Nathan Deal and Sandra Deal.

“There are so many (stories),” Lewis said. “Lester Maddox had his pet goose, Mac, living in the marble pond in front of the mansion. Jimmy Carter used to walk across West Paces Ferry Road with daughter Amy on his shoulders to use Anne Cox Chambers’ swimming pool. The Busbees hosted such famous visitors as Prince Charles and Burt Reynolds.

“During the Harris residency, the staff created a special rose garden because of Mrs. Harris’s love of roses. The Millers hosted presidential candidate and later president Bill Clinton. They also were overrun with government dignitaries during the 1996 Olympics.

“The Perdues created the Friends of the Mansion organization, which continues to support preservation of the furnishings and art in the mansion. The Deals have created truly a special atmosphere for the staff at the mansion. Each family has so many great stories, and we’ve tried to include the best of them in this book.”

The book has generated tremendous enthusiasm, Lewis said, and the most memorable part was interviewing the first families and learning personal stories from the past about the role the mansion played in their lives.

There will be a reception for the authors at 6:30 p.m. Tuesday, followed by an informal talk and book signing at 7 p.m.

“We really want to give the first lady a warm LaGrange welcome,” sad Carleton Wood, executive director of Hills & Dales, in a written statement.

The event is free to the public, but attendees are asked to call 706-882-3242 to register because space is limited.

The even is part of the yearlong celebrate the 100th anniversary of the Fuller E. Callaway home. More information is available at hillsanddales.org about other centennial events at Hills & Dales Estate.

‘Memories of the Mansion’ highlights the history of the current Governor’s mansion and the first families and people that called it home.

http://lagrangenews.com/wp-content/uploads/sites/37/2016/09/web1_Mansion-Book-Cover-version-2.jpg‘Memories of the Mansion’ highlights the history of the current Governor’s mansion and the first families and people that called it home.