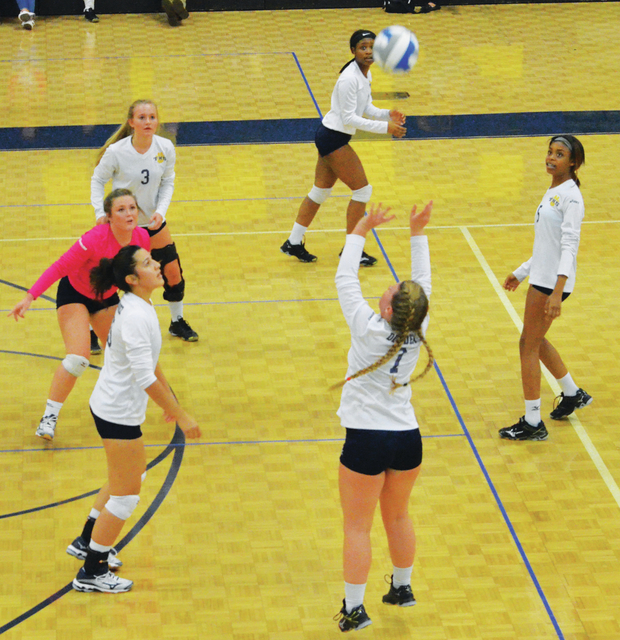 LAGRANGE – It was a fitting way to end it.

Before Monday’s home match against Smiths Station, the seniors on the Troup High volleyball team were recognized for their contributions to the program.

One of those players, Madi Jeter, made sure it was a winning senior night.

Troup won the first set 25-22, and it was ahead by one point in the second set when Jeter came through with a kill to lift her team to a 26-24, match-clinching victory.

It was a tough match against a quality opponent, but as Jeter put it, “there was no way” Troup was going to fall short on senior night.

It was the continuation of a successful season for the Lady Tigers, who will be the number two seed for the upcoming Region 5-AAAA tournament.

Troup head coach Jodi Dowden said playing a team the caliber of Smiths Station was good for her team as it prepares to play the elite teams it will face in the region and state tournaments.

“They are good,” Dowden said. “They feature some big offense. And we’re a defense team. When we come up against a big-hitting team like that, we know we’ve got to control our side of the court, and we took care of what we needed to take care of tonight.”

Jeter said Smiths Station brought out the best in she and her teammates.

“It was good playing a team like that,” Jeter said. “They’re very competitive, and it showed us a lot. We had to compete.”

Dowden said her front-line players did an exceptional job of slowing down Smiths Station’s top player.

“We don’t always get this, but we featured some great blocking in the middle,” Dowden said. “We shut their big hitter down, almost completely in Game one. We had to force her to start tipping, and doing other things with the ball. She still got a couple, but we were able to rattler her cage, and that made a big difference.”

One of those players who helped Troup get it done up front was Savannah Laney, who had three solo blocks, and three block assists.

“Savannah had an awesome night at the net,” Dowden said.

The strength of Troup’s team isn’t its ability to make plays at the net, though.

Troup regained the lead, this time for good, moments later when Jayde Dowden dropped the ball just over the net for a winner.

A kill by Laney pushed the lead to 22-19, and a Tori Cason ace followed with an ace put Troup up by four points.

Troup was ahead 24-22 when Bailey Lawson had a kill to clinch the set.

In the second set, Troup came out hot, surging to a 6-1 lead with Lawson serving.

Smiths Station hung tough and didn’t let Troup run away with the set.

It was tied at 17-17 when Troup ran off three straight points, with Akhya Mitchell capping that run with a kill.

Smiths Station stayed within shouting distance, and it actually took a 24-23 lead and was within one point of clinching the set.

A Lawson kill tied it, and Dowden had a service winner to give Troup the 25-24 lead and force set point.

That’s when Jeter found an opening in the Smiths Station defense, and her kill proved to be the decisive point.

OF NOTE: For more photos from Monday’s match, check out facebook.com/LDNsports