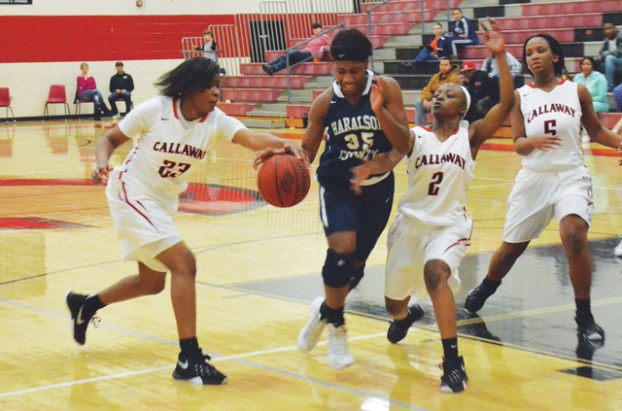 It’s an extra-inning thriller for Callaway

HOGANSVILLE – They were tested and pushed to the brink, and the Callaway Lady Cavaliers found a way to get it done.

Facing Temple in a region softball game on Tuesday, Callaway found itself trailing by three runs as it came to the plate in the bottom of the eighth inning.

About 30 minutes earlier, the Lady Cavaliers were leading 7-2 in the seventh inning, and it looked like they were going to coast to a comfortable home win.

Temple had other plans.

The Lady Tigers scored five runs in the top of the seventh to tie it, and they pushed three more runs across in the eighth inning to seize the lead.

Callaway was down, but far from out.

The Lady Cavaliers came off the deck and scored four runs in the bottom of the eighth, and Carley Turner’s RBI single won it.

Callaway head coach Ashley Summerlin was glad to see his players respond so well in a tense situation.

“We need to go through something like that,” Summerlin said. “This year, we’ve either won really big, or lost really big. Outside of the Troup game at the start of the year, we haven’t had to do that. So, we needed that. The girls competed, and they did a good job.”

Turner stepped to the plate in the bottom of the eighth with the winning run standing on third base.

On a 3-1 count, Turner ripped the ball into left field to end the suspense and give Callaway the dramatic win.

“I was nervous,” Turner said. “Everybody’s cheering, and I feel like I’ve got to do good. I just went for it.”

Callaway (8-12 overall) improved to 2-4 in Region 5-AA, and it has two region games remaining, both against Jordan on Oct. 4.

Callaway will be the number three seed for the region tournament on Oct. 9.

“It’s about the process, and getting better every day, and how much different are we going to be next Saturday than we are today,” Summerlin said.

In Tuesday’s game, Kelly Carlisle did her job from the leadoff position with three hits and three runs scored, and Jasmine Dukes had two hits, a walk, and two runs scored.

Senior KeKe Talley had a productive day out of the number eight spot in the lineup with three hits and two runs scored, and she stole two baes.

The number nine hitter, Acia Stephens, had two hits and was on base four times, and she scored the first run in the eighth inning.

Oeisha Jenkins had two hits with a double and a sacrifice fly, and she also got the complete-game win on the mound.

Kourtney Greer had two hits, Skylar Rice walked twice and scored a run, and Lydia Bartlett had a double.

Callaway took what appeared to be a commanding 7-2 lead to the seventh and potentially final inning.

Temple rallied to tie and had the go-ahead run on base, but Jenkins got a groundout to end the inning and keep it a 7-7 game.

It looked like Callaway may have won it in the bottom of the seventh when Stephens hit the ball on the nose with a runner on second, but the ball was caught by the first baseman, and she stepped on the bag to complete a double play.

Temple then scored three runs in the eighth inning, and at that point in the game it had scored eight consecutive runs.

“We were down a little bit,” Turner said. “All we had to do was stay up and keep cheering, and that’s what we did.”

Stephens, Carlisle, Dukes, Greer and Turner each had hits in the eighth inning, and Rice reached on a walk.

Lydia Barlett, who reached on a fielder’s choice, came home on the winning run on Turner’s hit.

“We wanted to make them happy,” Turner said.

Callaway’s Carley Turner watches a pitch sail out of the strike zone during Tuesday’s game. Turner had the game-winning hit in the bottom of the eighth inning. Kevin Eckleberry | Daily News

http://lagrangenews.com/wp-content/uploads/sites/37/2016/09/web1_CHS4-1.jpgCallaway’s Carley Turner watches a pitch sail out of the strike zone during Tuesday’s game. Turner had the game-winning hit in the bottom of the eighth inning. Kevin Eckleberry | Daily News

LAGRANGE – He’s looking to share his knowledge. Charlie Vinson, a local golf instructor with decades of experience in the... read more