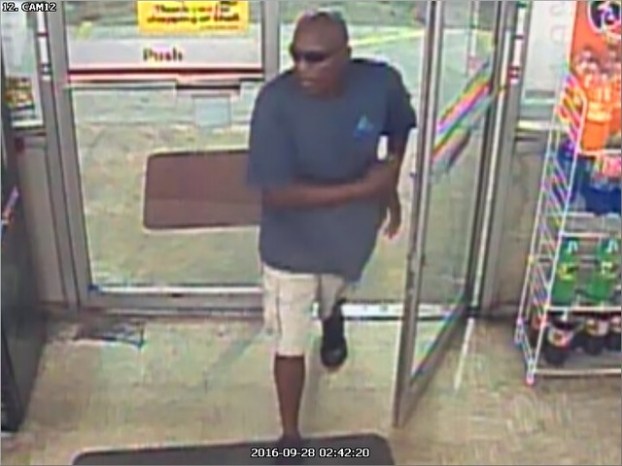 LaGRANGE — Investigators with the LaGrange Police Department are searching for a man who robbed a clerk at the Shell gas station at 320 Commerce Ave. while armed with a knife.

The robber allegedly brandished the knife as he entered the store about 2:30 a.m. on Wednesday and demanded money, investigators stated.

The man then forced the employee to open several cash drawers, where he grabbed the money before running out of the business, said police.

The clerk was not hurt during the incident.

The suspect was described as an African-American male, 35 to 40 years old, six feet tall and weighing about 200 pounds. He was wearing black sunglasses, black shoes, khaki shorts and a blue T-shirt.

Anyone with information on the incident or on the suspect is asked to call the LaGrange Police Department at 706-883-2603 of Troup County Crime Stoppers at 706-812-1000. Callers can remain anonymous.

LaGrange police are searching for this man who allegedly robbed the Shell gas station at 320 Commerce Ave. with a knife early Wednesday morning.

http://lagrangenews.com/wp-content/uploads/sites/37/2016/09/web1_2016093765-pics.jpgLaGrange police are searching for this man who allegedly robbed the Shell gas station at 320 Commerce Ave. with a knife early Wednesday morning.

LaGRANGE — Investigators with the Troup County Sheriff’s Office are searching for three people who robbed a man at the... read more