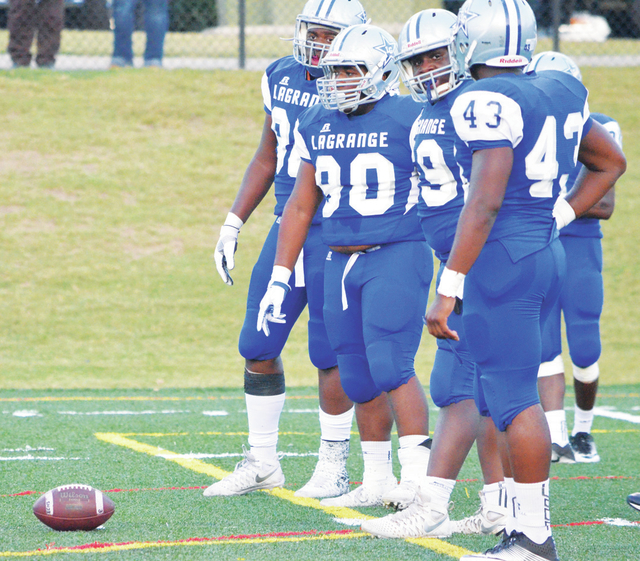 LAGRANGE – The Sandy Creek Patriots have established a standard of excellence over the past decade that few programs in the state have been able to match.

From 2008 to 2014, the Patriots didn’t win fewer than 11 games in a season, and they’ve won at least one playoff game for nine consecutive years.

Under head coach Chip Walker, the Patriots won state championships in 2009, 2010 and 2012, and during two of those years they went unbeaten.

This year’s team is continuing that winning trend.

The Patriots are 3-1, and their only loss came to an out-of-state team in the season opener, and they beat defending state-champion Allatoona in Week 2.

In their past two games, the Patriots scored a combined 83 points in wins over Morrow and Starr’s Mill.

That’s what is confronting Troup, which will visit Sandy Creek on Friday in a Region 5-AAAA game.

Also this week, LaGrange will be at home against Cedartown as it continues its Region 5-AAAA schedule, and Callaway is off.

As for Troup, it isn’t shying away from this challenge.

The Tigers (4-1) are red-hot, having won four consecutive games, and they began their region schedule with a 42-21 win over Chapel Hill last week.

This will be the region opener for Sandy Creek.

Troup is second in the region in point scored with 149, trailing only unbeaten and top-ranked Cartersville, which has scored 199 points in five games.

Troup’s defense has given up 109 points in five games, but it has come through in the clutch.

In the Chapel Hill game, Troup’s defense made three consecutive stops to end the game.

Sophomore linebacker Kevin Martin, who scored a defensive touchdowns against Chapel Hill, said is all “starts with practice.”

LaGrange also began its region schedule with a victory.

This week, LaGrange will try to put together its first winning streak of the season when it plays Cedartown on Friday night at Callaway Stadium.

Cedartown (2-2) began its region schedule with a 44-6 loss to Cartersville last week.

Callaway, which beat Harris County 48-21 last week to improve to 5-0, is off this week, and it will begin its Region 5-AA schedule on Oct. 7 with a game at Lamar County.

That will be the first of five region games in five weeks for the Cavaliers.

In eight-man football, Lafayette Christian (2-3) will be on the road against Praise Academy on Friday.

The Troup Tigers will be on the road against Sandy Creek on Friday. Kevin Eckleberry | Daily News

http://lagrangenews.com/wp-content/uploads/sites/37/2016/09/web1_troup.jpgThe Troup Tigers will be on the road against Sandy Creek on Friday. Kevin Eckleberry | Daily News

The LaGrange Grangers will host the Cedartown Bulldogs on Friday in a region game. Kevin Eckleberry | Daily News