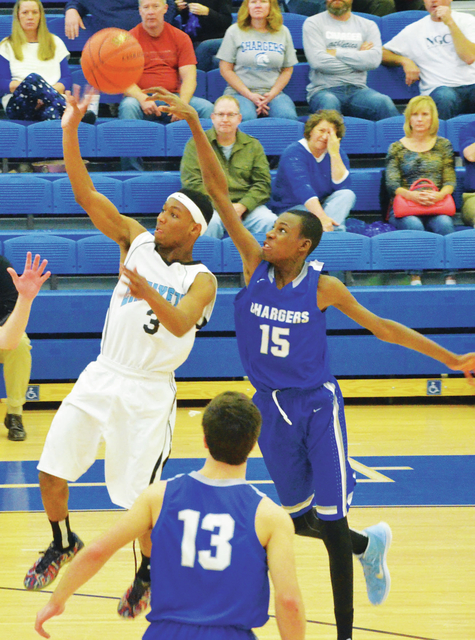 LAGRANGE – The Long Cane Middle School eighth-grade team built a big first-half lead, and it withstood a second-half charge by Gardner Newman to capture a 24-16 victory in a county clash on Thursday afternoon.

In the eighth-grade game, Gardner Newman trailed 24-8 at the half, but it scored a touchdown and converted a two-point conversion with less than two minutes remaining to make it an eight-point game.

The Mustangs got the ball for the final time with less than a minute remaining, and they were within an eyelash of scoring again.

On the game’s final play, Gardner Newman’s Jalin Shephard went up to make a catch in the back of the end zone.

Shephard made a tremendous effort to come down with the ball on the pass thrown by Marquavious Kelley, but it was ruled an incomplete pass by the official on the spot, and that was that.

Had the Mustangs scored a touchdown, they would have had the opportunity to tie the game and force overtime with a two-point conversion.

Instead, it was the Cougars walking away with the big victory over their county rivals to improve to 4-1, and the Mustangs fell to 4-2.

Cory Clark had a pair of touchdown runs for the Cougars, and quarterback Jace Godwin had a long scoring run.

Torre Pike, Long Cane’s first-year head coach, said it has been a pleasure working with the players this season.

“They’ve been a great group to work with,” said Pike, who was a wide receiver for the LaGrange College football team. “This is probably the most talented team I’ve ever been a part of. It’s just a blessing to be a part of a team like that. They show up, they work hard. We’ve got a motto, one heart, one soul, and they embrace it, and they play as a team.”

Gardner Newman, meanwhile, played inspired ball in the second half, but it wasn’t quite enough.

“It’s been like that all year,” Gardner Newman coach Michael Woodard said. “We always get behind. Sometimes that’ll come back and get you.”

Long Cane and Gardner Newman are in a five-team league, and the top four teams will be a part of the playoffs.

“ It’ll be different next game,” Woodard said. “We’ll probably see them again in the championship. I bet it’ll be us two.”

In the first half of Thursday’s game, Long Cane scored touchdowns on each of its three possessions.

On the game’s first possession, Nytorian Allen had a pair of first-down runs for the Cougars, and Clark completed that drive with a 3-yard touchdown run.

Clark also ran the ball in for the two-point conversion, and Long Cane led 8-0 with 5:28 left in the opening quarter.

The Mustangs answered with a touchdown of their own.

Twice on the drive Gardner Newman converted a fourth-down play.

Kelley had a 16-yard scramble on fourth-and-eight, and Shephard also had a first-down run on a fourth-down play.

After a 4-yard keeper by Kelley that gave the Mustangs a first down, Ross scored on an 8-yard run.

Shephard’s number was called on the conversion attempt, and he crossed the goal line to give the Mustangs two points, and the game was tied 8-8 with 7:54 to play in the half.

It took the Cougars just one play to reclaim the lead.

After a short kickoff, Godwin took off from midfield and scored on a 50-yard run, and Clark’s two-point run put the Cougars ahead 16-8 with 7:39 showing on the clock.

The Cougars then made a defensive stop, and they scored two plays following a punt.

On first down, Zy Varner got behind the Gardner Newman defense, and he caught a 35-yard pass from Godwin to put the ball on the 8-yard line.

Two plays later, Clark’s 2-yard touchdown run, and a keeper by Godwin on the conversion attempt, gave the home team a 24-8 lead with 3:12 remaining in the half.

Ross had a pair of long runs on the ensuing possession to get the Mustangs on the Cougars’ side of the field, and a first-down run by Shephard put the ball on the 14-yard line.

That scoring threat ended when Varner made an interception in the end zone, though, and the Cougars took the 24-8 lead to the break.

The Mustangs moved the ball on their first possession of the second half, but a nice open-field tackle by Godwin on Kelley on a third-and-long play forced a punt.

On the ensuing possession, the Cougars thought they may have put the game away when they converted a fake-punt attempt, with Varner picking up plenty of yards for the first down.

A penalty negated that play, though, and the Cougars had to punt the ball away.

Gardner Newman took over at its own 43 with 4:29 left in the game, and it drove for the touchdown, with Ross scoring on a 3-yard run.

The Mustangs attemped an onside kick, but it was unsuccessful, and the Cougars got the ball likely needing one first down to clinch the victory.

Gardner Newman still had three timeouts, so if the defense could make a stop, there would be enough time for the offense to do something.

Gardner Newman’s defense was up to the challenge.

After an unsuccesful fourth-down attempt by Long Cane on fourth-and-short, Gardner Newman got the ball near midfield with one minute remaining.

The Mustangs made it to the 20-yard line when Kelley threw a dart into the back of the end zone, and Shephard made a valiant attempt, but it wasn’t a catch, and a thrilling game came to a close.

Long Cane’s Zy Varner makes an interception in the end zone at the close of the first half. Kevin Eckleberry | Daily News

http://lagrangenews.com/wp-content/uploads/sites/37/2016/09/web1_cougars4.jpgLong Cane’s Zy Varner makes an interception in the end zone at the close of the first half. Kevin Eckleberry | Daily News

Gardner Newman’s Jalin Shephard looks to break free for a long run during the first half of Thursday’s game. Kevin Eckleberry | Daily News

http://lagrangenews.com/wp-content/uploads/sites/37/2016/09/web1_cougars2-1.jpgGardner Newman’s Jalin Shephard looks to break free for a long run during the first half of Thursday’s game. Kevin Eckleberry | Daily News

Long Cane quarterback Jace Godwin gets ready for the snap while the offensive linemen get in position. Godwin had a long touchdown run in the first half. Kevin Eckleberry | Daily News

http://lagrangenews.com/wp-content/uploads/sites/37/2016/09/web1_cougars8.jpgLong Cane quarterback Jace Godwin gets ready for the snap while the offensive linemen get in position. Godwin had a long touchdown run in the first half. Kevin Eckleberry | Daily News

LAGRANGE – The Sandy Creek Patriots have established a standard of excellence over the past decade that few programs in... read more