Fulfilling a life goal at 100 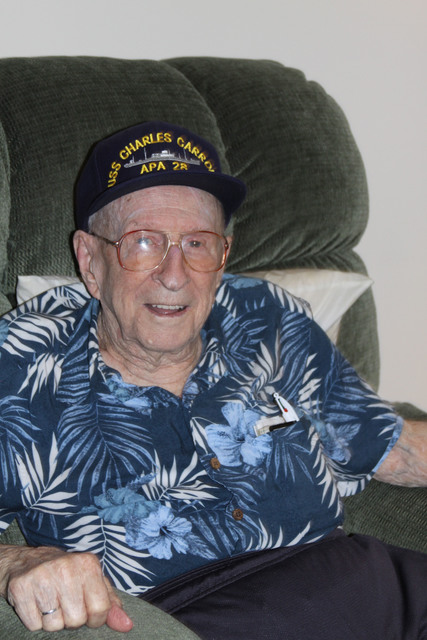 LaGRANGE — What will you do if you live to be 100? For Coleman Hugh Vines the answer is clear: He wants to preach.

Vines was born on Sept. 29, 1916, in Carroll County, and he has led a full life from his early days helping his father at their church to his time with the Civilian Conservation Corps, the U.S. Army and Navy, and as a pastor.

“None of my other ones have ever been like this one,” said Vines of his birthday. “It’s the biggest one I ever had.”

Vines grew up as an active member of his church and proudly notes that the only Sunday church service he missed growing up was the week his mother died. After his mother’s death, Vines joined the Civilian Conservation Corp in order to help his father pay off the medical debt.

President Franklin D. Roosevelt created the Civilian Conservation Corps, a public works program that operated from 1933 to 1942 and employed men. The program was part of Roosevelt’s New Deal that many credit with beginning to pull America out of the Great Depression.

“The best thing I’ve seen before, in my opinion, was when President Roosevelt was in office – it was in the depression, nobody could get jobs. That’s when he organized what we called the C.C. Corps, the Civilian Conservation Corps,” said Vines. “He gave all those people jobs. … That’s when things started to pick up financially.”

“After I got out of C.C. Corps, I went into the Army,” he said. “… When I got out, (WWII) broke out, and I knew I was going to be called back if I didn’t serve, so I went on back in the Army. And then my brother, Frank, he was enlisted in the Navy, and he wanted me to come into the Navy where we could serve aboard the same ship together.

“So, I got released of all my Army affiliations and joined the Navy. … In 1943, I wanted to go to Hawaii, so back then you could get what we called a short discharge to go to another post. And we would re-enlist for a full term, so I got a short discharge from Fort Benning and went to Hawaii and enlisted for three years, and I was over there not too long before the war started.”

After leaving the Navy, Vines drove a truck while studying to become a pastor at Atlanta Christian College. He eventually gave up both school and driving so that he could preach full time.

Vines is close to his family, and he regularly plays harmonicas from his collection of about 20 in different keys for his visiting grandchildren. He also plays harmonica for the residents of Poplar Creek Senior Care on the fourth Thursday of every month.

Vines has been married three times, and outlived his first two wives and all but two of his six children. He had six children – three boys and three girls. His children gave him 16 grandchildren – eight boys and eight girls.

Vines plans to preach at Bethany Christian Church in Carrollton on Sunday at 10:30 a.m. with his youngest grandson, Christopher Vines, reading the scripture for him.

http://lagrangenews.com/wp-content/uploads/sites/37/2016/09/web1_web0930Vines01-1.jpgSgt. Marshall McCoy, center, awards Hugh Vines, left, with a challenge medal and a coffee mug on behalf of the LaGrange Police Department in recognition of Vines’ service as the LaGrange Police Department’s first chaplain during a celebration in honor of Vines’ 100th birthday at Poplar Creek Senior Care on Thursday.

Hugh Vines turned 100 years old on Thursday and plans to fulfill his lifelong goal of preaching at his church for his 100th birthday on Sunday.

http://lagrangenews.com/wp-content/uploads/sites/37/2016/09/web1_web0930Vines2-1.jpgHugh Vines turned 100 years old on Thursday and plans to fulfill his lifelong goal of preaching at his church for his 100th birthday on Sunday.