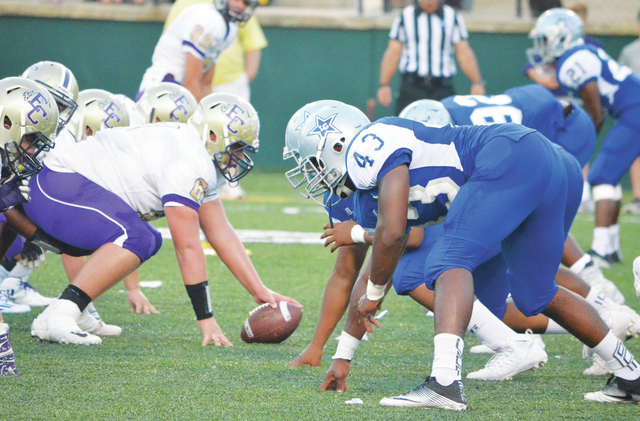 LAGRANGE – In the final game of the 2001 season, the LaGrange Grangers beat the Cedartown Bulldogs 22-19 to capture the state championship.

Those two teams will be sharing the field once again on Friday, this time at Callaway Stadium, and while the stakes obviously won’t be as high, it’s still an important game.

LaGrange and Cedartown are two of the teams fighting for four of Region 5-AAAA’s state-playoff spots, and the winner of Friday’s game will take a big step toward achieving that goal.

With upcoming games against Cartersville, Sandy Creek and Troup, who have just two losses between them, it’s critical that LaGrange defends its home turf this week.

“Next week, we’re either going to be 2-0, or 1-1 (in the region),” LaGrange head coach Dialleo Burks said on his weekly radio show. “I told them how fast this can separate. We can be in that category we don’t want to be in, or we can be in that category that everybody wants to be. We’re focusing week to week. It’s not down the road. We’ve got a big one this week.”

It helped that the Grangers were as healthy as they’ve been all season, with some critical players returning from injury, including sophomore quarterback Jakoby Smith.

Smith, who is also a key contributor on defense, did a nice job of running the offense, and he threw two touchdown passes to fellow sophomore Jamari Thrash.

Versatile senior Amad Ogletree had 147 rushing yards with a touchdown while playing running back.

Cornell Kendrick also had a touchdown run for LaGrange.

In the first half, Central-Carroll had fewer than 70 yards as LaGrange surged to a 20-0 lead.

“It was a great night,” Burks said. “We were able to get some people back that were out for a couple of weeks. One of them was Jakoby Smith, who was very instrumental in the win, playing both sides of the ball, quarterback and free safety. Our guys came out, and they understood what it took to win the game, and they did that.”

One player who has been performing throughout the season is Thrash.

Against Central-Carroll, Trash had touchdown receptions of 14 and 37 yards, and he is averaging more than 15 yards a catch.

Burks, who was a standout wide receiver during a professional football career that lasted a decade, appreciates what Thrash has brought to the team.

“He’s only a sophomore, so I’m excited to see what’s going to come in the future,” Burks said. “My heart is with wide receiver, because I played wide receiver. I like to see them grow, and get to that level. He’s playing at a high level right now.”

Ogletree has been a quarterback, wide receiver and running back during his three seasons as a starter at LaGrange, and against Central-Carroll he made a major impact in the running game.

“He’s playing at an MVP level right now,” Burks said of Ogletree. “He started off at quarterback, and went to receiver, went to running back. He’s doing a lot. And we like it that from a leadership standpoint that he’s able to do multiple things. We want the best guys on field at all times. That’s our motto. When you’re going behind a guy like that, it speaks volumes.”

Kendrick, Daz Williams and Myles Johnson teamed with Ogletree to help the Grangers control things on the ground against Central-Carroll.

It helps to have a veteran offensive line that opened holes for the running backs.

“The first half, it was like, OK, we were clicking on all cylinders,” Burks said. “We really wanted to see the run game get going, so it was very good to see Amad get some touches, and Daz, and Cornell Kendrick who came on late in the game, and also Myles Johnson, who missed the first quarter. We’ve got a stable of backs that can get the job done.”

As for Cedartown, it began its region schedule by playing the best Class AAAA team in the state, Cartersville.

Cedartown got an interception return for a touchdown by Tony Mathis early in the game, but that was about the only thing that went right on the night.

Cedartown managed 69 yards of offense, and it was held to minus two yards in the first half.

Cartersville has been doing that to every team it has played, though, and Cedartown coach Scott Hendrix said the players can’t dwell on that game.

Cedartown has the respect of Burks.

“Cedartown, watching them on film, they get after it,” Burks said. “They fight from the first quarter, all the way to the fourth quarter.”

LaGrange’s defense gets in position before the snap during a game against East Coweta. LaGrange will host Cedartown on Friday in a region game. Kevin Eckleberry | Daily News

http://lagrangenews.com/wp-content/uploads/sites/37/2016/09/web1_LHS2-6.jpgLaGrange’s defense gets in position before the snap during a game against East Coweta. LaGrange will host Cedartown on Friday in a region game. Kevin Eckleberry | Daily News