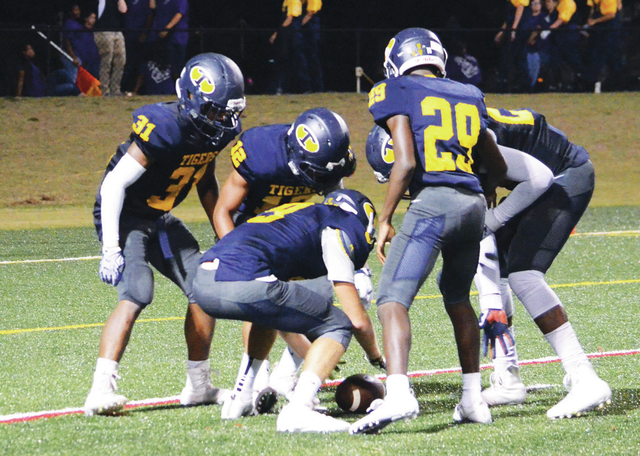 LAGRANGE – When the Troup Tigers made the trip to Tyrone last year to play the Sandy Creek Patriots, there wasn’t a whole lot of question what the outcome would be.

Predictably, Sandy Creek dominated the game from the get-go, and it won 49-14.

Flash forward a year, and the feeling is a lot different as Troup prepares for Friday’s road showdown against Region 5-AAAA foe Sandy Creek.

Sandy Creek is typically strong, and it is 3-1 and ranked fourth in the state in Class AAAA.

For Troup, the feeling is 180 degrees different than it was a year ago.

Troup, under second-year head coach Tanner Glisson, is 4-1, and it has won four consecutive games since a season-opening loss to Hardaway.

“We feel pretty good about where we are, and we’re continuing to get better,” Glisson said. “Who would have thought that last year, that you’re walking into Sandy Creek and you’ve got a chance? That feels pretty good. We’ve just got to keep moving this thing forward, and stay away from the injury bug.”

It’s a big-time challenge for Troup.

Under head coach Chip Walker, Sandy Creek has been one of the state’s top teams for more than a decade now.

“They’re good. They’re Sandy Creek. They’re legit,” Glisson said. “We think we’re pretty good, too. We don’t know if we’re quite on that level yet, but we’ll go play and see what happens.”

Sandy Creek lost to Fort Dorchester (S.C.) 48-35 in its season opener, and it followed that up with a 21-17 over defending Class AAAAA state-champion Allatoona before beating Morrow 48-6 and Starr’s Mill 35-21.

Troup has built an impressive early-season resume of its own.

Troup lost to Hardaway 21-14 in its first game, but it hasn’t fallen since.

“I know last year when we went in there, they were better than us in every phase of the game,” Glisson said. “That’s not the case this year. We’re better in some phases. Not all, or most, but in some phases we are. Our kicking game is pretty good, and we’ve got some other areas where we feel we’re a little bit stronger than they are, and that’s a good feeling.”

In a measure of the attention this game is receiving, it will be the WSB TV Game of the Week.

Highlights of the game will be broadcast on WSB at 11 p.m., and the winning team will be presented with a trophy on the field after the game.

“We’re excited about it,” Glisson said. “We don’t need to get too high. My biggest worry right now being where we are, where we came from, where we’re going, is don’t let the game get too big. Let’s don’t go up there and be real tight. Let’s be loose. Go up and play the way we’ve played all year long. Last year, there was never a big game where they said we’re playing Troup. So let’s enjoy that we’re in a big game. But all of them are big. The one after that (against LaGrange), people around here think that’s a pretty big one, too. We feel pretty good about where we are, and we’re continuing to get better.”

In last week’s game, Troup showed how complete of a team it is in the 42-21 win over Chapel Hill.

Troup’s first touchdown came in the first quarter when Macenta Stafford blocked a punt and returned it for a touchdown.

Late in the third quarter, sophomore linebacker Kevin Martin stripped the ball from Chapel Hill’s quarterback and scored a touchdown.

Carson Wreyford made all six of his extra-point attempts, and he did a terrific job punting, and one of his kicks was down on the 1-yard line.

Troup also did a tremendous job in the return game which helped it control field position.

“Our average field position is our own 45. That’s pretty good,” Glisson said. “We’re pretty pleased with that. Our special teams has been good. But it’s like shaving. It’s something you work on every day. If you don’t do it every day, it’ll get away from you. You have to put that importance on it. The kids bought into it. So that’s real important that we do that every single day and get better at it.”

Troup also didn’t turn the ball over, which is always a key to success.

Troup did fumble the ball twice, but it recovered it each time.

On one of those fumbles, offensive lineman Ethan Short picked up the ball and ran for a first down, and that led to a touchdown.

“We put the ball on the ground twice, and came away with it both times,” Glisson said. “We didn’t have any turnovers. And I think that is the second game where we’ve had zero turnovers. That’s pretty good. You do that, you’re going to win some games. And that’s a total reversal from last year.”

While it wasn’t a flawless performance, Glisson said the effort was excellent all night.

“The biggest thing on Friday, for the first time since I’ve been here, from start to finish, I felt like we gave extreme effort,” Glisson said. “I think there were 152 plays in the game, and we had two that did not have extreme effort. When you get that, that’s pretty dag gum.”

Quarterback Montez Crowe and the rest of the Troup offense gets ready for a play during last week’s game against Chapel Hill. Troup will visit a strong Sandy Creek team on Friday. Kevin Eckleberry | Daily News

http://lagrangenews.com/wp-content/uploads/sites/37/2016/09/web1_troup1-8.jpgQuarterback Montez Crowe and the rest of the Troup offense gets ready for a play during last week’s game against Chapel Hill. Troup will visit a strong Sandy Creek team on Friday. Kevin Eckleberry | Daily News

Troup’s players down a pu nt on the 1-yard line during the Chapel Hill game. Troup’s special-teams play has been phenomenal this season. Kevin Eckleberry | Daily News

http://lagrangenews.com/wp-content/uploads/sites/37/2016/09/web1_troup2-5.jpgTroup’s players down a pu nt on the 1-yard line during the Chapel Hill game. Troup’s special-teams play has been phenomenal this season. Kevin Eckleberry | Daily News

It’s an extra-inning thriller for Callaway