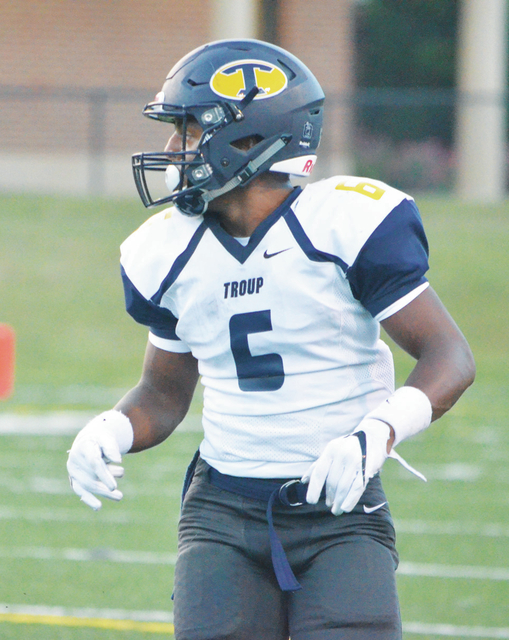 LAGRANGE – There was nothing flukish about it.

The Troup Tigers knew they were facing an uphill challenge when they traveled to Sandy Creek to face the fourth-ranked Patriots on Friday night.

Under head coach Chip Walker, Sandy Creek has been one of the state’s top programs for more than a decade, and this year’s team has the look of a legitimate state-title contender.

Yet when the clock struck zero on Friday night, it was the visiting Tigers, not the home-standing Patriots, celebrating a victory.

As they have all season, the Tigers continued to produce big plays on offense, the defense did a terrific job coralling the Patriots and even scored a touchdown, and the special-teams play was as exceptional as always.

Troup was the better team, and the final score of 28-20 reflected that.

“Sometimes you can go steal one, and it was a fluke, or a flash in the pan,” said Tanner Glisson, Troup’s second-year head coach. “But we really felt like we were the better football team, especially in the second half. It was 14-14 at the half. The first half could have went either way. They left some plays out on the table. We left some plays out on the table. The second half, we brought it to them a little bit. Our defense really played well. They didn’t score in the second half until there was a minute and a half left in the game.”

When it was over, Troup got an extra treat when it was presented with a gold trophy for winning the WSB TV Game of the Week.

Former Georgia quarterback D.J. Shockley was on the field after the game representing WSB, and he asked Troup running back Camren Russell how it felt to beat Sandy Creek.

Troup quarterback Montez Crowe threw touchdown passes to Chanse Hill and Macenta Stafford, Russell had a scoring run, and freshman Kobe Hudson returned a touchdown for an interception in the first half.

It was a 14-14 game at the half, and Troup took over in the second half, notching a pair of touchdowns to build a 28-14 lead before Sandy Creek scored with a little more than a minute remaining to get within eight.

Troup recovered the onside kick, and that was that.

“Our guys played hard,” Glisson said. “I just got done watching the film, and I was pleased with how physical we were. We started becoming physical. We really got some licks Friday. To go from 1-9 (last season), to knocking off the number three, four team in the state, that’s good for the kids. It’s good for momentum.”

While some folks may have been surprised when they saw the final score, Glisson said the team didn’t go into the game feeling over-matched.

As tremendous a team as Sandy Creek is, Glisson said he felt his squad was better in some areas.

“Going into the game, they were very confident in the game plan, and they just felt good about it,” Glisson said. “Last year, they were better in every phase. Going up there, we knew we were better in certain areas. And so I think our guys saw that on film. When you make those things happen, and the other areas of the team rise to the occasion, you’re able to put it together.”

One of the things Troup has been able to do all season has been to make plays in the passing game, and that was the case Friday night.

On Troup’s first possession, it was Crowe rolling out to his right and finding Hill in the end zone, and the senior went up and make a nice catch in traffic.

That score was set up by a 25-yard completion from Crowe to Ken Truitt, and by a long run by Russell.

Carson Wreyford made the first of his four extra-point attempts to give Troup the 7-0 lead.

Glisson said a strength of Troup’s teams is the talented players it has on the perimeter, and that came into play Friday.

“I think we’ve got a lot of guys on the perimeter that a lot of people have a hard time matching up with,” Glisson said. “You have Ken, and Kobe, and Stafford, and Chanse. And you get Cam Russell out of the backfield. That’s a lot of weapons. That creates a dilemma, and it’s a good one for us.”

Following Troup’s early score, the Patriots answered with a touchdown, and they were driving for the potential go-ahead score when the Tigers came up with a defensive gem.

A pass deflected off of a Sandy Creek player, and Hudson was on the spot and he came up with the interception, and he raced 75 yards for the touchdown, and with 10:50 left in the first half Troup led 14-7.

“That was big,” Glisson said. “Kobe’s just a gamer. If the ball’s around in his area, he tends to make plays. And that was a very big play for us.”

Sandy Creek added another touchdown later in the second quarter, and it was a 14-14 game at the half.

The second half was dominated by Troup.

With 7:34 to play in the third quarter, it was Crowe connecting with Stafford from about 20 yards out a touchdown to give Troup a 21-14 lead.

That’s the way it remained until the game’s closing moments.

A punt by Wreyford pinned the Patriots back on their own 10-yard line, and when they were stuffed on fourth down, the Tigers took over just 13 yards from the end zone.

Troup’s defense was stout throughout the game, and it stopped Sandy Creek on a handful of fourth-down plays.

While Sandy Creek had the size advantage with his mammoth offensive line, Troup’s defense held its own.

“We’re pretty quick on defense,” Glisson said. “And we moved some people around. We got people in the right place. We moved Jarred Lane to the defensive line. We had number 25 (Joko Willis) at linebacker. And we’ve gotten on defense where we know where we’re going, so we were able to play faster. They had a hard time with our quickness up front. They were big, but we were quicker. So they had a time with us penetrating and doing some things.”

Sandy Creek was able to drive for one final touchdown, and it was an eight-point Troup lead following the missed extra point.

Troup covered the ensuing onside kick, and Troup was able to run out the clock.

One of the keys to Troup’s victory was the performance of the special-teams units.

Wreyford was perfect on extra points, he continued to put the ball in the end zone on his kickoffs, and he helped Troup control field positions with his stellar punts, including one that was downed inside the Sandy Creek 5-yard line.

Troup also had a big gain on a fake punt in the third quarter, and it successfully covered the onside kick at the end of the game.

“We had a fake punt, and that was a big momentum swing,” Glisson said. “I really wanted to keep that in our back pocket until they least expected it. They were setting up a good return, and we went ahead and faked it.”

Troup is off this week, and it will return to action on Oct. 14 for a showdown with LaGrange.

Troup’s Chanse Hill had a touchdown catch in the first half. Kevin Eckleberry | Daily News

http://lagrangenews.com/wp-content/uploads/sites/37/2016/10/web1_Troup-hill.jpgTroup’s Chanse Hill had a touchdown catch in the first half. Kevin Eckleberry | Daily News

Troup’s Camren Russell had a touchdown run in the second half. Kevin Eckleberry | Daily News

http://lagrangenews.com/wp-content/uploads/sites/37/2016/10/web1_troup-russell.jpgTroup’s Camren Russell had a touchdown run in the second half. Kevin Eckleberry | Daily News