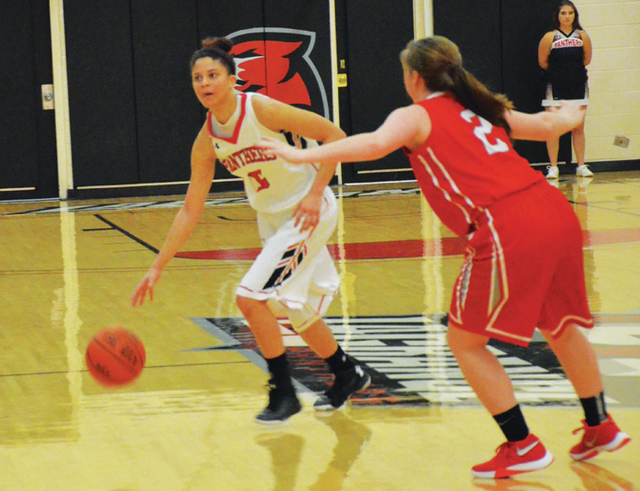 But it wasn’t enough.

In a wild game where neither team led by more than seven points, it was Averett coming away with a 65-62 victory in four overtimes on Saturday evening at Callaway Stadium.

It was a heart-breaking loss for the Panthers (2-2 overall), who appeared on the verge of winning their USA South opener in the third overtime.

After Averett’s Cole Westberry missed a field goal, LaGrange College got the ball at the 25-yard line needing any kind of score to win the game.

LaGrange College made it to the 2-yard line and appeared to be on the verge of securing the victory, but quarterback Connor Blair was picked off by Seth Brendle in the end zone, and Averett had new life.

In the fourth overtime, LaGrange College got the ball first, and Blair was picked off by Octavius Ross.

Now it was Averett with a chance to win the game, and Westberry ended the suspense by knocking his 36-yard field goal through the uprights.

It was a nice moment for a freshman kicker who only moments before had pulled a kick wide left in the third overtime.

“He’s a freshman. That’s really big,” said Cleive Adams, Averett’s third-year head coach. “That’s just going to help him so much moving forward because he’s a first-year guy. And we just think the world of him. Cole Westberry is just a great talent.”

The game was all about offense.

LaGrange College and Averett combined for nearly 1,200 yards, and they scored 17 touchdowns between them.

LaGrange College quarterback Connor Blair, the USA South’s leading passer, was 31-of-47 for 447 yards with seven touchdowns and three interceptions, including the two costly ones in overtime.

Lavelle Meeks, Ervens Oge and Marsalis Jackson each had two touchdown catches, and Marcus Campbell had one.

Blair had one rushing touchdown.

Averett quarterback Kelly Hall completed 32-of-46 passes for 388 yards with two touchdowns, and he also ran for 65 yards with a pair of scores.

Terrance Owens II was Hall’s favorite target, and he had a remarkable day with 10 catches for 163 yards.

Sean Bowman ran for 149 yards with two touchdowns, and Owens and Sean Bowman each had a scoring catch.

Both teams also had a kickoff return for a touchdown, and they came within moments of each other.

In the second quarter, Travis Jones returned a kickoff 88 yards for a touchdown to give Averett a 24-20 lead.

On the ensuing kickoff, Kiontai Button caught the ball right at the goal line, and he went 99 yards for the touchdown, and LaGrange College led 27-24.

Amidst all of the offensive and special-teams fireworks, though, it was a defensive play that saved the day, with Brendle making the game-saving interception in the third overtime.

With the Panthers on the 3-yard line and only needing a field goal to win it, the percentage play seemed to be to play conservatively and run the ball, but Adams said his team was ready for that particular pass play.

“They like the pop pass down there,”Adams said. “It’s an old-school pass. We didn’t have a special call, that’s just film study.”

It was a back-and-forth game, with neither team ever leading by more than a touchdown.

The Panthers answered with a 29-yard scoring pass from Blair to Meeks, and it was tied 48-48 with 24 seconds left, and it was on to overtime.

Averett got the ball first in overtime, and Bowman scored on a 1-yard run to give his team a 55-48 lead.

Needing a touchdown to keep the game alive, the Panthers found the end zone, with Blair connecting with Jackson for a 25-yard touchdown.

It was a tremendous play by Blair.

The junior quarterback was under pressure, but he was able to elude a couple of tackle attempts, and he threw a perfect pass to Jackson.

The Panthers had the ball first in the second overtime, and they got a 30-yard touchdown pass from Blair to Oge on third-and-15, and they led 62-55.

The Cougars had their backs against the wall needing a touchdown to keep the game going, and they got it, with Bowman hauling in a 12-yard scoring pass from Hall, and it was tied 62-62.

In overtime number three, Westberry missed the field goal, and the Panthers had a chance to win it.

A 12-yard completion from Blair to Josh Hardrick put the ball on the 3-yard line, and on the next play, Brendle had the interception.

LaGrange College had to go right back on offense.

Blair was sacked to make it third-and-16, and on the next play, Ross came through with the inteception.

Blair, who is having a sensational season, had a monster day in the loss.

Hardick also had five catches, and Oge and Jackson had four receptions apiece with four touchdowns between them.

LaGrange College running back Drew Lewiski takes off on a long run during the first half of Saturday’s game against Averett. Kevin Eckleberry | Daily News

http://lagrangenews.com/wp-content/uploads/sites/37/2016/10/web1_LC1.jpgLaGrange College running back Drew Lewiski takes off on a long run during the first half of Saturday’s game against Averett. Kevin Eckleberry | Daily News

LaGrange College’s Kiontai Button returns a kickoff for a touchdown during the first half. Kevin Eckleberry | Daily News

http://lagrangenews.com/wp-content/uploads/sites/37/2016/10/web1_LC9.jpgLaGrange College’s Kiontai Button returns a kickoff for a touchdown during the first half. Kevin Eckleberry | Daily News