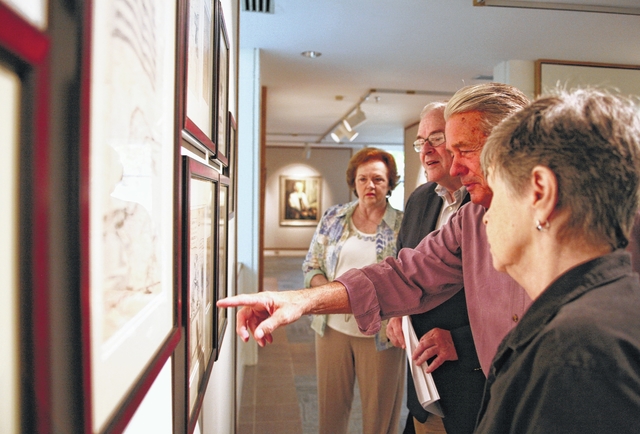 Growing up, Troup County historian Clark Johnson said he heard stories about his great-uncle, Pierce Todd Lee, but didn’t know much about him.

“Uncle Pierce is a bit of an enigma,” Johnson said. “I recall him vaguely, but I was 9 when he died at the age of 56. Even Elizabeth Sims, my cousin and his niece, doesn’t remember him any clearer.”

Johnson said Lee was a quiet man, a native of Meriwether County, Georgia, and a respected accountant. He was married to Jennie Elizabeth Dunson, who attended LaGrange College. Johnson’s grandmother was Jennie Dunson Lee’s sister.

“As far as we know, he was a self-taught artist,” Johnson said. “Aunt Jennie always said he drew cartoons for the paper, but I can’t tell you how many hours I spent trying to find a single cartoon drawn by him in the LaGrange Graphic, the LaGrange Reporter or the LaGrange Daily News (which was a merger of the other two). I decided she must have made it up.”

That is, until the day a man from Carrollton visited the Troup County Archives, where Johnson works as interim executive director.

“He had a packet of drawings and clippings of cartoons done by P. T. Lee,” Johnson said. “I was floored. Turns out Uncle Pierce drew them for a newspaper called the LaGrange Times. Unfortunately, there are no copies of the paper in existence, and there are no records of it even existing. So, the newspaper he drew for is as enigmatic as he.”

Johnson purchased the drawings and clippings, and donated them to the college in 2010 to go with a collection of Lee’s paintings that Johnson had donated earlier.

“‘From Daumier to Oliphant: The Art of Cultural and Political Satire’ spotlights illustrations and cartoons from the college’s permanent collection,” Lawrence said. “Having Mr. Lee’s works gives a wonderful perspective and scope to the show.”

It also includes engravings of early U.S. presidents, lithographs by Honore Daumier and Henri Boutet from 19th-century France and caricatures by Patrick Oliphant. The six large caricatures of 20th-century presidents was done by Oliphant during his 1998 visit to LaGrange College.

“It includes works both sober and satirical,” she said. “It is eminently timely in view of the current election scene.”

“From Daumier to Oliphant: The Art of Cultural and Political Satire” continues through Dec. 15. Gallery hours are 8:30 a.m. to 4:30 p.m. weekdays. For more information, contact Lanora Yates at lyates@lagrange.edu.