A time to connect 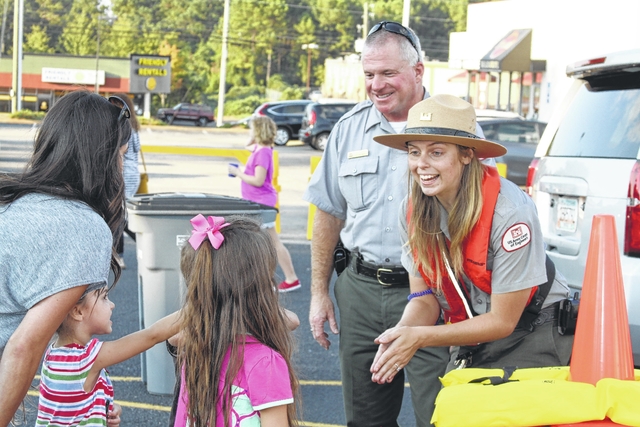 LaGRANGE — Officer Ray Sheppard of the LaGrange Police Department joked with children as they tried to hit the lever to push him into a dunk tank at the National Night Out Tuesday.

The event takes place in cities across the U.S. and Canada to try and create safer communities by building partnerships within them. LaGrange’s inaugural event included games by local groups, information booths, and a practice crime scene for festival goers to try to solve, courtesy of the Georgia Bureau of Investigation.

“The National Night Out is a national event,” said Sgt. Marshall McCoy of the LPD. “It’s a chance to bring the citizens out, the faith-based community, public safety, and this year, we were fortunate enough to be able to partner with Sheriff Woodruff and his guys. That is what it is all about. It is all about partnerships with the people you see out here.”

McCoy said the event’s goal is to give the community and local law enforcement a chance to get to know each other and build a strong relationship with the different groups within the community.

“We are just glad that people come out and see this in a different light, because usually the only time people see us is when they call for service — when they’ve got a problem that they can’t fix — so to come out and see them, for them to know that we are just like them,” Woodruff said. “We are everyday citizens, and we just want them to be relaxed around us to be able to talk to us, tell us their problems if we can help with something. But, most of all, just come out today and have a good time.”

“We really want to be a part of the community,” McCoy said. “We don’t want to be separate from it, and I think we work hard to do that.”