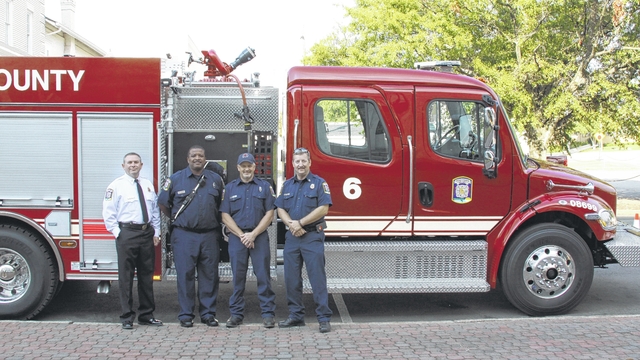 “This truck replaces a ‘93 model that was decommissioned, so they have been driving a ‘90 model,” said Deputy Chief Kevin Norred.

The fire department was able to purchase the truck for $264,625 with Special Purpose Local Option Sales Tax funds.

The old truck will go into reserve, according to officials. The new truck is specially equipped to better handle medical calls, which the fire department regularly responds to, especially out in the county where it may take longer for an ambulance to arrive.

“Between 75 and 80 percent of our calls are medical related,” said Chief Dennis Knight.

Department representatives pointed out that the new truck could potentially save the department money longterm due to increased fuel efficiency.

“We have so many medical calls, and it costs so much to send out a regular truck,” Norred said.

EMTs Keith Jackson and Chad Hendrix said they were also excited about one other feature on the new truck: air conditioning.