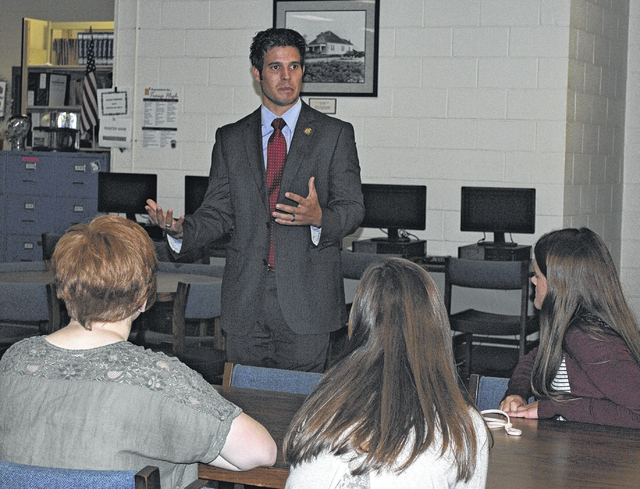 LaGRANGE — Circuit Judge Dustin W. “Dusty” Hightower spoke to students at Troup County High School Wednesday to talk about his career, the law, and different situations he has been in during his time as a judge.

Hightower spoke to a group of 18 students from a current events and debates class in the school library, which is taught by teacher Chance Giddens.

The class is a one-semester elective class, as Giddens likes to describe, “where the students have the freedom to come up with a list of topics, do some investigating, and have syncretic debates about different issues.”

Giddens said he has had guest speakers such as police officers, people who are sitting in the Georgia Legislature, the state superintendent of education, and the representative of the U.S. Department of Education all come in and speak to his current events class before, but never a judge.

“It was an opportunity that presented itself from one of the judge’s representatives,” Giddens said. “Principal (Chip) Medders forwarded me the email that they were looking to do some community outreach and come in to talk to some schools, so it worked out because this class really lends well to speakers coming in.”

The group of students asked him questions around topics such as criminal justice issues, people who get caught with drugs, his views on hate crimes, how busy his weekly schedule can be, his thoughts on the Black Lives Matter movement, what laws he thinks are unfair, and how he might judge the intent of a criminal.

“I just find it very beneficial to talk to young students at school, and I’m a big proponent of starting early and letting them know the issues and educating kids so we can prevent a lot of this bad stuff that we’ve been having to deal with,” Hightower said.

“My motivating factor is to show the students that these Legislature officials are normal people,” Hightower said. “I’ve always been of the opinion that to what is given, much is expected and, as a Legislature, I want people to realize that the only reason you’re not having an impact is because you choose not to and, if you participate, most of us elected officials are willing to help and listen.”

Hightower was sworn in as a superior court judge May 26 by Georgia Gov. Nathan Deal in the Coweta Judicial Circuit.