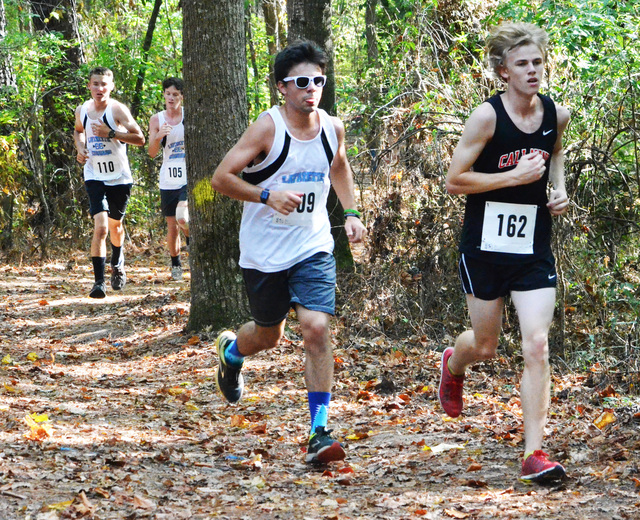 Two weeks ago, it was LaGrange High’s Alex Bowie getting the best of Loutzenheiser in a cross-country race.

On Tuesday afternoon at Troup High, those two runners got together once again, and this time a county championship was on the line.

The two men ran together for the entire race, and it was Loutzenheiser pulling away at the end to take the top spot in the 3.1-mile race.

In the team competition, it was LaGrange taking seven of the top 15 places to win easily.

On the girls’ side, LaGrange’s Alaina Tomlinson ran by herself for most of the race, and she crossed the finish line well ahead of everyone else.

In the boys’ race, Callaway’s Jason Freiberg set the early pace, but soon enough, it was Bowie and Loutzenheiser leading the way.

At the earlier race that was held at Lafayette Christian School, it was Bowie out-sprinting Loutzenheiser at the end to secure the win.

In the rematch, they went back-and-forth, and this time it was Loutzenheiser winning the sprint to the finish line.

“The whole race, I was putting in some attacks here or there, at the one-mile mark, at the two-mile mark, at the tops of hills and things like that,” said Loutzenhiser, a junior. “And he was responding to everything I could throw at him. So I just waited. Normally he’s a lot faster sprinter than I am, but I just figured I’d try to conserve as much energy as possible, and try to roll my dice. And I ended up getting it.”

Bowie was disappointed to finish second, but he’s a freshman, so he’ll have plenty more opportunities to win a county title.

Bowie was proud of how his teammates performed, with five LaGrange runners finishing among the top seven.

Bowie said everyone on the team, himself included, has improved as the season has gone along.

“They’ve definitely got better,” Bowie said. “When we started, I was running 20 minutes, and I’ve shaved like two minutes off of that. And so has the whole team. Now the top five are running under 20.”

Freiberg hung around with the front-runners for most of the race, and he ended up placing fourth, continuing what has been a terrific season for the first-year runner.

Freiberg, who also wrestles at Callaway, enjoyed the chance to test himself against elite runners like Bowie and Loutzenheiser, as well as third-place finisher Josh Turman of LaGrange.

“Running out here with them, it’s real fun,” Freiberg said.

Freiberg said his coaches caution him against going out too fast, but he couldn’t help himself on Tuesday as he sprinted out to the early lead.

“I normally start out way too fast,” Freiberg said. “The coaches tell me Jason, when you start, don’t be first. They want me to stay in the top 10, top five. Sometimes I run out of gas. But today, it was a pretty good race.”

Placing fifth was LaGrange’s Matthew Callaway, and he was followed across the finish line by teammates Miller Penn and Donta Dunson, and Troup’s Parker Stover and Ryan Fuller were eighth and ninth, respectively.

In the girls’ race, Tomlinson had no trouble repeating as county champion, and she was one of seven LaGrange runners who placed in the top 10.

As was the case in the recent race at Lafayette Christian School, Tomlinson ran away with the top spot.

“It was challenging because I didn’t have someone to run by,” Tomlinson said. “But, other than that, it wasn’t too bad. It was a pretty easy course.”

Tomlinson is proud of the improvements her teammates have made this season.

“Our second runner (Anna Brovoll) has been getting faster, and Audrey (Tomlinson) just got faster,” Tomlinson said. “A lot of our team is younger girls. They started out kind of slow, but they’ve gotten better, which is good.”

Brovoll, Lafayette Christian School’s Cate Skipworth, and Troup’s Catherine Leveritt ran together for a good portion of the race.

At the finish line, it was Brovoll finishing second, and she was followed by Skipworth and Leverett, and they all came in with times under 20 minutes.

Placing fifth was LaGrange’s Anna Doerr, and she was followed by teammates Nikki Stansbury and Audrey Tomlinson.

Monica Cameron of Troup was eighth, and LaGrange’s Amanda Thompson and Mary Beth Callaway were ninth and 10th, respectively.

The runners take off at the start of the county championship on Tuesday at Troup High. LaGrange High won the boys’ team title, and Lafayette Christian’s Michael Loutzenheiser won the individual championship. Kevin Eckleberry | Daily News

Troup’s Ryan Fuller and Parker Stover made their way through the course. Stover finished eighth, and Fuller was ninth. Kevin Eckleberry | Daily News

http://lagrangenews.com/wp-content/uploads/sites/37/2016/10/web1_running11.jpgTroup’s Ryan Fuller and Parker Stover made their way through the course. Stover finished eighth, and Fuller was ninth. Kevin Eckleberry | Daily News